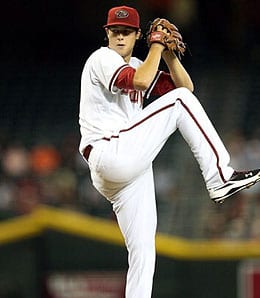 Tyler Skaggs is locked into the rotation.

In a deal that would cause Jeffrey Loria to blush, the BoSox moved Adrian Gonzalez, Josh Beckett, Carl Crawford and Nick Punto to the Dodgers for James Loney, Allan Webster, Ivan DeJesus and two players to be named later. The rumour mill has Jerry Sands and Rubby De La Rosa in the mix as the two players to be named. Clearly, Punto was the difference maker in getting this deal done.

This will go down in history as one of, if not the biggest post non-waiver trade deadline deal of all time. Can anyone recall a deal of this magnitude occurring after the July 31 deadline? Can anyone remember a quarter of a billion dollars worth of player contracts changing hands at the end of August? What an incredible turn of events.

From a Fantasy perspective this trade is going to wreak havoc in single-league formats. August 26 will now officially be known as Christmas Day for those playing in NL-only leagues.

There were a few interesting developments last week other than the “trade” so let’s get to the Troll’s recommendations.

Casey Kelly, SP, San Diego Padres (CBS: 7 per cent owned, ESPN: unowned): The injury suffered by Jason Marquis (fractured left wrist) has prompted the Padres to turn to Kelly. The prize catch that the Padres landed along with Anthony Rizzo (and Reymond Fuentes) for now ex-BoSox 1B Gonzalez back in December 2010 will make his big league debut Monday against the Braves. Kelly has dealt with elbow issues this year that have limited him to only eight starts but when pitching he’s fared exceptionally well. In 37 2/3 IP, he’s struck out 39 while allowing a meagre three free passes. In what could potentially be a two-start week, Kelly is worth a pickup in all formats.

Tyler Skaggs, SP, Arizona Diamondbacks (CBS: 27 per cent owned, ESPN: 2 per cent): Skaggs made his much anticipated debut last week against the Marlins and — after allowing a second inning homer to Justin Ruggiano — settled in, allowing only one hit over the balance of his 6 2/3 IP to earn the win. And now that Joe Saunders has been traded, Skaggs’ rotation spot should be assured for the balance of the season.

Dylan Bundy, SP, Baltimore Orioles (CBS: 24 per cent owned, ESPN: unowned): The rumour mill is running rampant, suggesting we might get the opportunity to see young phenom Bundy in September. The promotion of Manny Machado improves the odds of this happening as the Orioles are demonstrating they are all in as they attempt to chase down a wild card spot. Bundy has now worked his way up to Double-A Bowie and hasn’t skipped a beat along the way. In 98 1/3 IP combined over three levels, he’s allowed 63 hits and 24 walks with 113 punchouts while posting a 2.01 ERA. The budding ace has enjoyed a rather impressive first season of pro ball, making him a solid spec pick for all formats down the stretch.

John Jaso, C, Seattle Mariners (CBS: 32 per cent owned, ESPN: 5 per cent): Take a look at Jaso’s numbers from the past month: in only 49 at-bats, he’s hit three homers with 12 RBI, and compiled a fine .306 BA. On the season he’s now up to eight homers with 42 RBI in 216 at-bats while also walking 43 times contributing to a stellar .404 OBP. Jaso is a must-own player in two-catcher formats.

Mitch Moreland, Texas Rangers (CBS: 26 per cent owned, ESPN: 29 per cent): In the past week, Moreland has gone 7-for 21 with two homers and 10 RBI. He’s quietly putting together a very solid season. The two homers brings Moreland to 14 on the year in only 235 at-bats. He missed six weeks with a severe left hamstring strain but since his return has been on fire, picking an ideal time to heat up with the Rangers looking to wrap up another division crown.

Steve Johnson, SP, Baltimore Orioles (CBS: 2 per cent owned, ESPN: 1 per cent): In his second start for the O’s, Johnson turned in another solid outing Saturday against the Jays. The 24-year-old righty is now 2-for-2 in the win department and has two quality starts under his belt in which he’s struck out 16 in 12 IP. Maybe Buck Showalter should find him a permanent spot in that rotation? Johnson’s great season at Triple-A Norfolk has continued in Baltimore and he has the potential to be an integral component in the O’s chase for a wild card spot.

Will Venable, OF, San Diego Padres (CBS: 13 per cent owned, ESPN: 6 per cent): In his past five games, Venable is 11-for-20 with one homer, four RBI, nine runs scored and two thefts. He can’t hit southpaws worth a lick but for those playing in daily leagues get him into the mix when the Padres are facing a righty.

Pedro Ciriaco, 2B/SS/3B, Boston Red Sox (CBS: 19 per cent owned, ESPN: 13 per cent): Last week, Ciriaco went 10-for-26 with six runs and a theft. Playing time shouldn’t be an issue moving forward with Will Middlebrooks done for the season and Nick Punto moving on to the Dodgers.

Jacob Elmore, SS, Arizona Diamondbacks (CBS: 1 per cent owned, ESPN: unowned): The Stephen Drew trade provides playing time opportunities for the unheralded middle-infielder. At Triple-A Reno, Elmore was enjoying an outstanding season hitting one homer with 73 RBI, 32 thefts, 95 runs scored, and a .344 BA. When was the last time you saw a batter drive in 73 runs with only one long ball?

Collin McHugh, SP, New York Mets (CBS: 3 per cent owned, ESPN: unowned): McHugh will be back in September and after that nine strikeout debut against the Rockies on Thursday, he should be on your radar.

Roger Bernadina, OF, Washington Nationals (CBS: 2 per cent owned, ESPN: unowned): Michael Morse is day-to-day with a badly bruised hand. Bernadina offers some pop, some speed and — for at least the next week — some at-bats.

Lucas Harrell, SP, Houston Astros (CBS: 39 per cent owned, ESPN: 5 per cent): Harrell struggled last week against the Cardinals but has previously run off a string of seven quality starts. The “ace” in Houston should provide decent strikeout totals and a smattering of wins down the stretch.

By Tim McLeod
This entry was posted on Sunday, August 26th, 2012 at 1:44 pm and is filed under BASEBALL, The Wire Troll, Tim McLeod. You can follow any responses to this entry through the RSS 2.0 feed. Both comments and pings are currently closed.