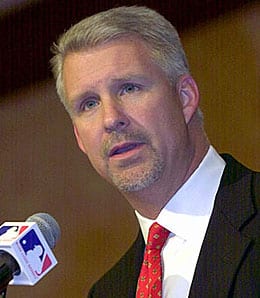 Support from a sex addict is better than no support at all, right?

The struggles of the Boston Red Sox continued this weekend as they lost two of three in New York to their arch rivals, the Yankees.

Boston has now fallen 7.5 games behind the third-place Orioles as the prospect of a Wild Card spot slips further away. If not for a Toronto squad that is having even greater struggles, surely the BoSox would again be making a push for the AL East cellar.

Another lost season in Beantown is spiralling out of control.

The fact that the vilified and pretty much universally-hated Bobby Valentine has come under so much fire lately hasn’t been a surprise; the big shock is that one of his supporters has been Steve Phillips, his GM back in the Mets’ days and someone who Bobby V.’s relationship with was strained at best.

Last week, Phillips – the voice behind MLB 2k12 and a man who has managed to pretty much work his way out of the game because he can’t keep it in his pants — had this to say to the Boston Herald:

“I feel for Bobby because it’s been a struggle, As the season began, it felt like Bobby was an outsider coming into a team that had a certain way of doing things. When you’re a new manager and you have players that are back from the year before, there’s some part of that. But it doesn’t feel like Bobby’s been given much of a break.”

That sounds strangely like sympathy from a man who knows all too well how grating and difficult Valentine can be.

As a Red Sox fan, no, I can’t blame Valentine for the record 25 players Boston has put on the DL, or for the underperformance of the top of the rotation and key hitters like Dustin Pedroia and Adrian Gonzalez. But I can blame him for coming across as a turd on a very consistent basis. I had a bad feeling when Valentine was shoved down GM Ben Cherington’s throat last winter, and that feeling did not suddenly grow warm and fuzzy after the Kevin Youkilis fiasco.

Cherington would probably love to get away from under this mess, but I’m guessing he has about as much power to fire Valentine as he did in the hiring process.

The fire that was supposedly lacking in 2011’s chicken and beer BoSox surely hasn’t been rekindled this year – not when you see the team about to shut down Carl Crawford for the season for Tommy John surgery, even though we were assured that he would play through pain while the team still had a shot. I’m not a mathematics expert, but I’m pretty damn sure Boston is still in the race – on paper.

But I guess this team just doesn’t care anymore. Sorry, Bobby, but I think that’s where you’re supposed to come in.

By RotoRob
This entry was posted on Monday, August 20th, 2012 at 12:50 pm and is filed under BASEBALL, MLB Today, RotoRob. You can follow any responses to this entry through the RSS 2.0 feed. Responses are currently closed, but you can trackback from your own site.