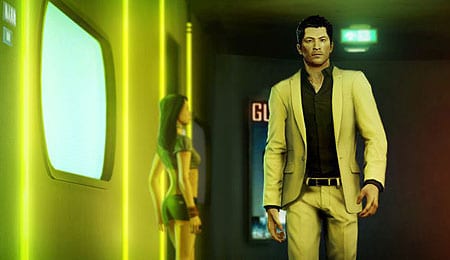 There aren’t many smoother protagonists in gaming than Wei Shen.

Reviewing games, or any product, is supposed to be a reasonably objective process. And while that is typically true, everyone has certain niches that appeal to them. That brings me to Square-Enix’s recent release, Sleeping Dogs, which is essentially a video game adaption of the Hong Kong action movies I have enjoyed so much over the years. Needless to say, I had high hopes for Sleeping Dogs, and I’m glad to report it doesn’t disappoint.

Although the general feel of the game invites comparison to the Grand Theft Auto games, in many ways the setup seems more derivative of Rocksteady’s Batman titles. Most of the fighting in Sleeping Dogs is hand to hand, and when an opponent turns red you have a chance to counter their attack with the press of a button. Various enemy types also limit your options offensively — for instance, you cannot do a basic grab on weapon-wielding foes — a la the Dark Knight’s Arkham adventures. While not necessarily original, it’s well implemented and makes for some smooth, visually interesting fights.

When not in melee combat, driving, free running and shooting should account for most of your time in Hong Kong. Getting behind the wheel is fairly responsive, albeit exceptionally fast paced, and the biggest problem is the camera’s occasional inability to track quick changes of direction. Gun fights utilize a basic cover system, but they do offer up one exceptionally cool feature: when you vault over cover, time slows down and allows you to drop your enemies. Free running is crisp and makes you feel like a bad ass, even if seemingly half the city’s population can match you stride for stride.

A selection of mini games built around activities like hacking, cracking safes and planting bugs rounds out the controls. They’re all fairly simplistic, with the possible exception of triangulating cell phone signals, yet are interesting and varied enough not to get stale.

In the critical areas (fight/movement choreography and storytelling cut scenes) developer United Front Games has created an excellent looking, fluid title. However, there are definitely moments when the curtain is pulled back as textures load slowly and items suddenly pop into view. There are also in-game dialogue scenes where the characters repeat the same couple of hand gestures over and over again throughout the game. It’s one of those things that once you pick up on, you can’t help but notice every time a conversation starts up.

Seamlessly blending English and Chinese into the dialogue gives Sleeping Dogs a unique feel, and the voice acting is strong even if the presence of notable Hollywood actors like Emma Stone and Tom Wilkinson is much ado about nothing. Some of the vendor lines wear out their welcome after a while, but it’s a common failing of open-world games in general. Between the dialogue, the city’s ambient sound and a quality soundtrack, this is a good showing.

Set in Hong Kong, Sleeping Dogs casts you as Wei Shen, an undercover police officer with childhood ties to members of the Sun On Yee triad organization. Using this connection, Shen is able to infiltrate them as a low-level foot soldier under the direction of Winston Chu. From there he’ll need to establish the trust of his fellow triad members and move up the ranks while still obeying some semblance of the law and concealing his true identity.

It’s an interesting story that creates enough depth with its characters to make you want to push forward and see where Shen’s journey takes him next. Sure, there are some Hollywood clichés worked in, such as the stuffy handler that can’t understand what you’re going through as an undercover cop, but it’s an interesting cast with lots of diverse personalities. In fact, you could make the case that there are too many people to keep track of, particularly at the secondary level.

There are a total of 30 missions to undertake in the primary storyline, which range from solid to excellent as the game builds to a crescendo. Combine those with the handful of police cases you’ll work and you’re looking at roughly 10-to-12 hours of essential content for gamers. Of course, this being an open-world experience, there are plenty of supplementary activities to partake in.

Smaller tasks categorized as favours qualify as the most interesting and diverse of the non-essential content, but drug busts, street races and debt collecting all prove to be worth completing as well. Add to that plenty of health shrines and lockboxes to track down, gambling dens to frequent and underground fight clubs to conquer and you can easily push your run time past the 25-hour mark.

Sleeping Dogs also features some RPG elements as each successfully completed mission will net you experience points in one of three areas: police, triad and face. The first two are self explanatory, whereas face represents your overall reputation and therefore is boosted by activities like winning races and doing favours for others. Each level unlocks new moves or increases your effectiveness in areas like bullet damage or food and drink buffs.

As good as the game is, however, there are a few drawbacks. Most notable is that the game is pretty easy. The majority of my failures were the result of making a wrong turn during a chase section or something fluky like not seeing a weapon to pick up and entering a gunfight unarmed. If you don’t care about being challenged then this won’t affect you, but if you’re someone that likes to have their skills put to the test the low difficulty level could be a turnoff.

Also, while the overall story is good, the ending felt a bit rushed. The closing missions themselves are actually among the best in the game so that’s not the issue. It’s just that, after a fairly meticulous build, the final act ends somewhat abruptly and in a way that felt like there could’ve been a few more missions worked in (or at least one more).

There’s a lot to do in Sleeping Dogs, and most of it is damn fun. Add to that an interesting selection of characters and a quality story and you’ve got a game that is well worth your attention.

By Herija Green
This entry was posted on Saturday, August 25th, 2012 at 1:13 pm and is filed under Herija Green, Video Game Reviews. You can follow any responses to this entry through the RSS 2.0 feed. Both comments and pings are currently closed.