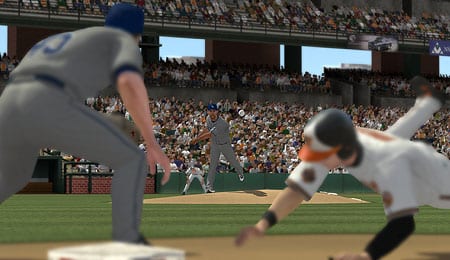 Ah, March. It’s a special time of year for baseball fans. When everyone is in first place and optimism envelops all 30 clubs, from the World Champion Cardinals to the lowly Astros. Then, of course, the season starts and that optimism goes up in smoke for many around the league. It’s no different for sports video games. The arrival of a new version means hope. Hope that last year’s issues have been cleaned up and the franchise is making meaningful progress. So does MLB 2k12 deliver an inspiring performance? Or is it déjà vu all over again?

Pitching has been, and remains, the highlight of MLB 2k12. The gesture-based pitching makes it feel more immersive with the combination of timing and smoothness of motion both factoring in to how effective a given pitch will be. 2k Sports made a subtle yet significant change by having hitters start to sit on your pitches if you throw them too much. Selectable pitches will turn yellow, and then red, indicating a batter is looking for it; at which point you throw it at your own peril. It effectively forces you to mix your pitch selection (at least against the CPU), and that makes for a more realistic game.

A second addition doesn’t endear itself quite as well. Pitch performance is dynamic this year, which means that if you register punch outs with a specific pitch its in-game rating will rise. Conversely, allowing hits will reduce that pitch’s effectiveness. I understand the premise, but I’m not convinced it’s beneficial to the gameplay.

The other big change is in the field where the throwing meter has been overhauled. This year the meter that appears once you’ve fielded a ball is contextual, with segments of the bar coloured based on the difficulty of the throw. For example, after a routine grounder the green zone will be huge and easy to hit; whereas stabbing a ball deep in the hole and throwing on the run may offer little more than a sliver, resulting in a higher error probability. It’s a solid idea that doesn’t have all the kinks worked out, yet. Still, it’s a legitimate step up from previous years and makes fielding more interactive.

Meanwhile, hitting and baserunning return virtually unchanged. There is a new (and impressive) physics engine at work behind the scenes to create more realistic outcomes at the plate based on timing, pitch location, etc., but actually playing feels identical. Stealing and running the bases are serviceable.

There has been some visual progress from 2k11 to MLB 2k12, though it’s mostly found in the game’s lighting and other peripheral elements. Character models still run the gamut from instantly recognizable to “wait, that guy doesn’t look anything like that,” and everywhere in between. And while none of that has an impact on how the game plays, as a Brewers fan it’s weird to see mustachioed folk hero John Axford take the hill in the ninth clean shaven (and then have the announcers discuss his facial hair).

However, while pitching and hitting animations remain good, the aforementioned throwing meter has inadvertently resulted in some really bad looking plays in the field. Infielders consistently take too many steps, and when you’re controlling players it’s not uncommon to come to a complete stop before your meter reaches its optimal point. You may not notice in the flow of the game, but try checking out a replay — it just doesn’t look like real baseball. Baserunning is also noticeably goofy. Players take off out of the batter’s box realistically enough, and then after a couple of steps they start running in a bizarre upright fashion that kills any sense of speed.

Now in its third year, My Player mode’s only notable addition from last year is the selection of a role when creating your player. There are several to choose from — strikeout pitcher, closer, speedster, Gold Glover, power hitter, etc. — and that choice dictates what areas you’ll be strong in to start off. However, once that is out of the way it is business as usual. You still earn points to be distributed as you see fit and your initial choice does nothing in terms of making an attribute easier or harder to improve. Then, as soon as you hit the rating- and performance-based goals you’re in the majors.

It took me longer to reach that goal this year, though not for the right reasons. My pitcher, created from the “workhorse” template, was installed as the Double-A closer. So even though I was designed to be an innings eater I was tasked with finishing games while retaining ratings thresholds like stamina, which is entirely counter-intuitive. My hitter, from the leadoff mold, was also noticeably slower to the majors as well because the game’s rewards are static (it’s always 100 points for a home run, 25 for a single) so my slap-hitting middle infielder had to grind out points much more than a power hitter.

Most of my issues with the A.I. from last year return as well. Computer baserunners remain cautious to a fault, and we’re now at over 500 games and counting between the last two years without a single home run hit while I’m on base. Not one. It’s still difficult to get a good read on a batted ball when you’re on base, too, which makes getting doubled off more frequent than it should be. Lastly, managerial A.I. can be poor. I’ve watched the computer issue intentional walks that brought the tying run to the plate and bunt a runner to third late when down by two runs. These are the kinds of things that should’ve been weeded out by now, and it’s a bit deflating that they haven’t.

All that said; I found that I still enjoyed the journey that My Player offers up. You’re constantly improving your skill set and molding yourself into a star. So while I would’ve welcomed some improvements the core of the mode is fun and should provide enough incentive to spend a good number of hours there.

Franchise mode has also played a pat hand with all the bells and whistles you’ve come to expect from the MLB 2k series. Simulating seasons tends to produce lower-than-usual numbers with only a handful of players at the major league level posting an average above .300, and in five years I only saw one player (Mark Teixeira) reach 40 home runs. It’s also pretty clear from pouring over the stats that the game’s stamina system must not work properly as there were a number of pitchers that appeared in more than half their teams’ games — and I’m not talking about situational lefties, either.

Trading A.I. is fairly solid, at least when the computer is doing the proposing (and they love to submit potential trades). However, I was still able to pry inexpensive young talent away via the proverbial “four quarters for a dollar” route; such as grabbing Dee Gordon from the Dodgers for Nyjer Morgan, Alex Gonzalez and Kameron Loe.

Also, for those that are curious, the game does feature the option to include the new expanded Wild Card format. Meanwhile, the other significant change on the horizon, Houston’s move to the AL West in 2013, does not occur during franchise mode.

There is one significant addition to the gameplay menu: MLB Today Season Mode. Here you’re given the option to guide a team throughout an entire season at the same pace as your real-life counterparts. That means pitching rotations are set for you, and if your team makes a trade the in-game roster will immediately reflect that. It’s an interesting idea to allow you to play as your favourite team and attempt to improve its fortunes, and it offers another way to enjoy the game.

Online play is surprisingly crisp in MLB 2k12 with minimal lag. In fact, the only time the game seems to stutter occasionally is when transitioning from a hit ball, which isn’t a big deal at all. The team at 2k Sports deserve some serious kudos for creating such a solid online offering of a game that is almost entirely predicated on timing.

Although MLB 2k12 hasn’t made a lot of major improvements from last year, it still offers up an enjoyable take on America’s past time.

By Herija Green
This entry was posted on Friday, March 16th, 2012 at 8:08 pm and is filed under Herija Green, Video Game Reviews. You can follow any responses to this entry through the RSS 2.0 feed. Both comments and pings are currently closed.