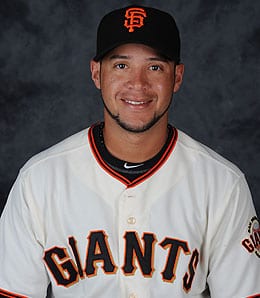 Gregor Blanco has a reason to smile thanks to Melky Cabrera’s suspension.

As the dog days of summer wind down and we head into the dash for the finish line, what was once a marathon is now a full blown sprint.

Congratulations are in order this week to both Felix Hernandez and Adam Dunn. King Felix rewarded his owners and the Mariner faithful on Wednesday against the Rays with the 23rd perfect game in baseball history.

On Saturday against the Royals, Dunn slugged his 400th big league homer. Kudos to Dunn for bouncing back from his dreadful 2011 campaign and being an integral part of the playoff contending White Sox.

On the flip side of the coin Melky Cabrera received a 50-game suspension for violating the league’s substance abuse program. What were you thinking, Melky? This is a huge blow to the Giants’ hopes as they battle the Dodgers for supremacy in the NL West, and to Mr. Cabrera who is heading into free agency this offseason. Oopsy.

Moving forward, let’s give this week’s Troll picks the once over.

Brandon Belt, 1B/OF, San Francisco Giants (CBS: 37 per cent owned, ESPN: 16 per cent): Finally, a Belt sighting has occurred. In the past six games, he’s gone 10-for-24 with five RBI. And given the loss of Cabrera, the Giants will need continued production from Belt if they are to hold off the hard-charging Dodgers.

Gregor Blanco, OF, San Francisco Giants (CBS: 10 per cent owned, ESPN: 2 per cent): Someone always ends up being the beneficiary when a suspension occurs and it looks like Blanco is that guy, unless the Giants go outside the organization. Blanco doesn’t offer your team much in the way of homers, RBI or average, but speed is his thing, so if you need that, he’s your man.

Todd Frazier, 1B/3B/OF, Cincinnati Reds (CBS: 55 per cent owned, ESPN: 51 per cent): We mentioned Frazier when Joey Votto first hit the DL and his recent performance warrants an encore. Since the beginning of July, Frazier has smacked nine homers with 29 RBI, and is smacking the ball to the tune of a .315 BA. With three homers in his past five games, he’s clearly not slowing down. What are you waiting for? If Frazier is available get him owned and in your starting lineup immediately.

Hisashi Iwakuma, SP, Seattle Mariners (CBS: 25 per cent owned, 6 per cent): Since the beginning of July when Iwakuma was moved into the rotation he’s very quietly been getting the job done. In 48 IP he’s won three games with a solid 3.19 ERA and 41 strikeouts. The Mariners will give the righty ample opportunities down the stretch as they attempt to determine if the pending free agent fits into their 2013 plans.

Johnny Giavotella, Kansas City Royals (CBS: 4 per cent owned, ESPN: unowned): Chris Getz is lost for the season after undergoing surgery Saturday to repair a fractured thumb. The Royals have called up the Giavotella to fill the void. At Triple-A Omaha the G-Man slugged 10 homers with 71 RBI, seven thefts, and an outstanding .323 BA. The Royals will give him full-time at-bats in an effort to evaluate his potential for the 2013 campaign.

Justin Smoak, 1B, Seattle Mariners (CBS: 18 per cent owned, ESPN: 3 per cent): Can Smoak crawl his way back to the Mendoza line?

Jaime Garcia, SP, St. Louis Cardinals (CBS: 66 per cent owned, ESPN: 28 per cent): He’s returning to the hill Sunday after being sidelined since June 5 with a shoulder strain. The southpaw struck out eight over five IP in his final rehab start at Triple-A Memphis. If he looks good in his return, the purse strings can be loosened on this evening’s FAAB bidding.

Tyler Greene, 2B/SS, Houston Astros (CBS: 5 per cent owned, ESPN: 1 per cent): Jed Lowrie is nowhere close to returning from the nerve injury that has sidelined him since mid-July. In his absence Greene has filled in solidly with two homers and five RBI since being acquired by the ‘Stros and is worth a look in deeper leagues.

Josh Donaldson, C/3B, Oakland Athletics (CBS: 1 per cent owned, ESPN: unowned): Brandon Inge suffered a dislocated shoulder that has thrust Donaldson back into a full-time role in Oakland. The catcher eligibility is intriguing.

Rob Brantly, C, Miami Marlins (CBS: 1 per cent owned, ESPN: unowned): The Marlins will give Brantly — recently acquired from the Tigers in the Anibal Sanchez deal — a good look down the stretch. It only makes sense with incumbent John Buck batting .187 and slated to earn $6 million in 2013.

Jhoulys Chacin, SP, Colorado Rockies (CBS: 18 per cent owned, ESPN: 5 per cent): Chacin is scheduled to return Tuesday against the Mets after missing three and a half months with an entrapment in a nerve in his pectoral muscle. Now that’s a mouthful… and doesn’t sound fun. He’s worth stashing in deeper leagues pending his return.

Anthony Gose, OF, Toronto Blue Jays (CBS: 9 per cent owned, ESPN: 1 per cent): This kid can absolutely fly. On Friday night (with some help from Craig Gentry) he turned a bloop single into a triple. He’s now stolen a base in six consecutive games dating back to August 13. If your need is speed you won’t find a better option.

Jeremy Guthrie, SP, Kansas City Royals (CBS: 10 per cent owned, ESPN: 10 per cent): Guthrie has pitched shutout ball in back-to-back wins with 14 strikeouts in 15 IP. Did anyone see this coming?

James Loney, 1B, Los Angeles Dodgers (CBS: 16 per cent owned, ESPN: 4 per cent): Loney has smoked two homers in his past three games. Is it a blip on the radar or the beginning of a streak?

By Tim McLeod
This entry was posted on Sunday, August 19th, 2012 at 12:47 pm and is filed under BASEBALL, The Wire Troll, Tim McLeod. You can follow any responses to this entry through the RSS 2.0 feed. Both comments and pings are currently closed.