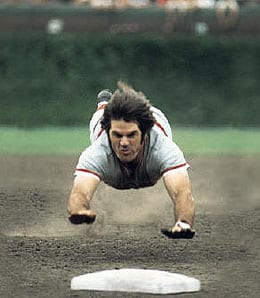 Can Pete Rose avoid the tag on his new reality show?

This week’s episode of RotoRob’s Fantasy Baseball Weekly Podcast (heard every Thursday at 9 p.m. on Blogtalkradio) began inauspiciously, with Buck pulling his Alvin the Chipmunk imitation and Tim missing in action for the first 10 minutes of the show as he frantically drove around looking for gummy bears. But like troopers, we fought through and wound up churning out yet another informative and entertaining Fantasy baseball Podcast, this week focusing to a large extent on our second half predictions.

We covered a veritable cornucopia of topics, including:

To hear the show in its entirety, click the play button below. Now.

By RotoRob
This entry was posted on Friday, July 20th, 2012 at 1:52 pm and is filed under BASEBALL, Buck Davidson, Podcast, RotoRob, RotoRob's Fantasy Baseball Weekly, Tim McLeod. You can follow any responses to this entry through the RSS 2.0 feed. Responses are currently closed, but you can trackback from your own site.