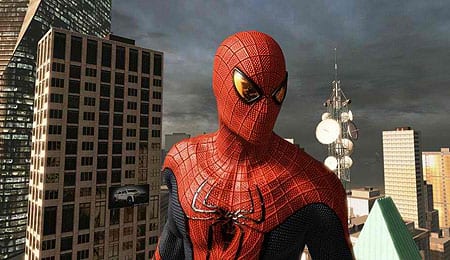 Spidey stoically ponders whether he really wants to save yet another infected citizen.

For the third time in as many years, Beenox and Activision have teamed up to unleash a new adventure for Spider-Man. What’s unique about this one is that it ties in to the recently released film, and every gamer knows the long, sad history of film-based games. That said, The Amazing Spider-Man avoids not one, but two traps, managing to feel like something more than a glorified update of the last two titles while not coming across as a quick cash grab.

Much like with Activision’s other recent gravity-defying title, Prototype 2, controlling Spidey is solid when covering large chunks of ground and dicey when trying to be precise. Traversing Manhattan can be done either with long web swings (right trigger) or via a series of time-slowing, point-to-point jumps (right bumper) called web rush. Both of these methods prove to be effective yet limited.

Web swings don’t take altitude into account, and as a result you may find Spider-Man scraping the pavement after a long downswing when you wanted to remain above the skyline. Similarly, web rush can deposit you on the top or side of nearly any object, but when it comes to marking open air as your destination it becomes hit or miss. Sometimes the game allows it; other times it turns red and it’s a no go.

Combat is straightforward, and the new direction will be instantly familiar to fans of Rocksteady’s Batman titles. Spidey’s “spider sense” now doubles as a visual cue to counter enemy strikes, allowing you to deflect blows with the touch of a button. You also have both melee and ranged attacks at your disposal along with the aforementioned web rush, which can be used to target enemies. As you progress, more attacks will unlock from rush mode, but the button combinations to execute off remain simplistic. When you take damage, a quick tap of the left bumper transports you to (temporary) safety as well. It’s an effective, if unoriginal, setup.

Solid visually, Amazing Spider-Man never transcends that designation due to having too limited a selection of fighting moves/counters and a Manhattan that’s largely devoid of personality. Spider-Man looks good when he’s fresh and clean, but the accumulated damage to his suit ends up looking weird and unnatural… almost as though he has runnels of flesh torn from his body. The acrobatic nature of Spidey’s moves can also send the camera spinning in nausea-inducing directions.

Voice acting is quite good, which includes a turn from Nolan North as Alistair Smythe, so any angst about the film actors not being involved is unfounded. However, the dialogue heard while traveling around Manhattan gets repetitive, and the soundtrack is forgettable. Still, there’s enough good to count the audio as a definite positive.

Set after the events of the film, The Amazing Spider-Man sees Peter Parker and Gwen Stacy once again get caught up in the fallout of OsCorp’s cross-species virus — the same one that turned Curt Connors into the nefarious Lizard. Things begin calmly enough, with an afterhours visit to OsCorp, but soon Parker’s own “infection” stirs the remaining cross-species into frenzy and they break loose. The result is OsCorp locked down, Gwen in quarantine and infectious creatures loose in Manhattan… and guess who gets to save the day?

The game can be neatly compartmentalized into two areas: the open-world hub, which houses a massive number of collectables and side missions, and primary story-based sections that are generally enclosed in smallish rooms and hallways. Defeating enemies, completing objectives and locating hidden items net you experience points, which level up Spidey and allow you to fortify his existing abilities as well as unlock new ones. Robotic foes also drop tech pieces that are used for a separate selection of skill upgrades.

Combat has been revamped from last year’s Edge of Time and now utilizes the Arkham City approach with your “spider sense” tingling — it appears as wavy lines above your head — when an enemy attack is imminent. Time your button press correctly and you’ll negate their strike, allowing you to build up your combo meter and unleash signature moves to finish off your opponents. Later on you’ll encounter foes whose attacks cannot be countered (the wavy lines appear red) and must be avoided. Absorb too many blows and the screen will begin to redden; to recoup you’ll need to use a web escape as simply avoiding further damage will not heal you.

Some will certainly chastise Amazing Spider-Man for shamelessly borrowing so heavily from Rocksteady, and it’s hard to argue with that point of view. However, if you take lack of originality out of the equation you’re left with fun, fast-paced action that lets you feel like a super hero by making six- or seven-on-one situations look like a cake walk. There’s also an available stealth element where you can take out foes below you with a single button press, though it too is reminiscent of Batman.

When you’re not engaging in the combat-heavy story missions most of your time will be spent exploring Manhattan, which is teeming with a glut of side quests and collectables. Although the sheer amount of content Beenox packed in here is commendable, the variety is lacking, so odds are you’ll tire of the more mundane tasks (like rounding up infected civvies or snapping “freelance” photos) long before you’ve exhausted the supply of them. The hidden labs and police stand offs are probably the best optional content on offer, but unless you’re an achievement hunter or a completionist you can safely skip many of the tasks secure in the knowledge you’re not missing much.

Told over 12 chapters — 13 if you count the epilogue where you can continue exploring the city — The Amazing Spider-Man should take around 10 hours, though that number could balloon depending on how many side missions and collectables you go after.

It is also worth mentioning that I experienced some technical issues with the game, which included an error message that said my disc was unreadable. Then, after I installed it to the hard drive, I got one that indicated it couldn’t be authenticated on a few occasions. It could’ve been my disc, but a scan of online message boards suggests others have had similar issues.

A solid story, fun (albeit derivative) combat and lots of extra content make The Amazing Spider-Man a quality game by any standard, and an absolute dynamo for a movie-based title. Fans of old Webhead should definitely enjoy the ride.

By Herija Green
This entry was posted on Thursday, July 19th, 2012 at 12:54 pm and is filed under Herija Green, Video Game Reviews. You can follow any responses to this entry through the RSS 2.0 feed. Both comments and pings are currently closed.