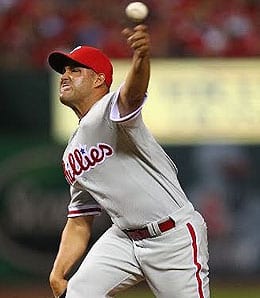 Raul Valdes has been solid, but served up a damaging dinger Sunday.

Every baseball season brings its Fantasy surprises, but few have been bigger in 2012 – from a pleasant perspective, that is – than Philadelphia Phillies’ catcher Carlos Ruiz.

Heading into the season, we ranked Ruiz as the 19th-best catcher to own, making him a decent No. 2 backstop in standard formats.

No catcher has been as valuable as Ruiz in 2012, and really it’s not even close.

Not only has the Panama-born veteran continued to excel defensively, but he’s put on a show offensively that no one saw coming. Another two hits in Sunday’s swan song before the break lifted Ruiz back up to .350, a mark he’s pretty much steadily maintained since mid-May.

Ruiz hit .313 with 10 RBI in April, yet it was his worst month of the season from an OPS perspective. That ought to tell you something right there.

With all the underachieving (either through performance or injury) on the Phillies this year, imagine where they’d be without Ruiz’s contributions. In a season filled with lowlights for Philly, Chooch’s efforts make him the most valuable player on the team.

We are talking about a dude that’s already within 26 hits of matching his career best set last year; his extra-base pop has exploded. Hell, he’s even pitching in with the occasional steal. He’s in the top five in the NL in batting, slugging and OPS. He’s already set a career high in dingers.

Every time it looks like he’s coming back to earth, Ruiz lights in up. Consider that he’s taken an 0-for-4 10 times this season. In the games following those efforts, he’s batting .419 with a .486 OBP and a slugging percentage of nearly .750. Ruiz is obviously making rapid adjustments which have allowed him to avoid a prolonged slump.

Overall, Ruiz is performing at a fourth round level – pretty sweet for a player that likely wasn’t even drafted in your league.

And he’s done it all despite a severely weaker walk rate. Clearly, taking a more aggressive approach at the plate is working for Ruiz.

Naturally, Ruiz continues to fly under the radar in the public eye, failing to get voted into the All-Star game, but Fantasy owners have definitely caught on.

So if you can parlay the 33-year-old veteran for a nice return, do it.

By RotoRob
This entry was posted on Monday, July 9th, 2012 at 12:50 pm and is filed under BASEBALL, MLB Today, RotoRob. You can follow any responses to this entry through the RSS 2.0 feed. Responses are currently closed, but you can trackback from your own site.