MLB Today: Joey Votto Not Yet Delivering on Huge Contract 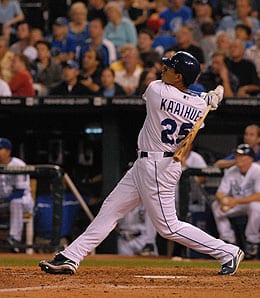 After a winter of inactivity following the 2010, the Reds raised a lot of eyebrows this winter by being among the most active clubs – dealing away a good chunk of their prospect cadre, penning a few big free agents and locking up franchise player Joey Votto to a 10-year, $225-million deal.

The deal gave Votto his wish – to be the highest-paid Canadian-born player. But Cincinnati didn’t have to go that crazy to fulfill his dream. The previous record deal for a Canadian player was Larry Walker’s six-year, $70-million contract. Now Votto is signed through age 39 in yet another example of a deal that may not look as good as the player ages. Time will tell, but we believe the Reds do understand that this contract can come back to haunt them six or seven years from now. Let’s not forget that Votto dealt with anxiety issues a couple of years ago, something Aubrey Huff understands all too well right now. We’re not saying it will be an issue for Votto again, but it’s not out of the question, either.

For now, the Reds have a long-term solution at first base, a move cemented when the club dealt away Yonder Alonso.

Still, regardless of Votto’s MVP-calibre play, signing a first baseman to that long a deal and giving him that much money seems unwise to us.

Meanwhile, the now incredibly rich Votto is off to a sluggish start. He went 1-for-3 with an RBI double and a walk Wednesday, but hasn’t gone yard since the second game of the season. One homer in 18 games? Well, Albert Pujols — who knows a thing or two about crazy long, massively expensive contracts for first basemen — would kill for numbers like that.

Votto does lead the NL in walks, and with a .444 OBP, he’s on pace for his finest season in that regard. But let’s face it: he’s not getting paid the big bucks to draw walks. The Reds need dingers, RBI and BA from Votto, and through 18 games, his 1-10-.279 mark is not inspiring. He’s also failed to swipe a base yet and striking out more often than ever before.

By RotoRob
This entry was posted on Thursday, April 26th, 2012 at 8:11 pm and is filed under BASEBALL, MLB Today, RotoRob. You can follow any responses to this entry through the RSS 2.0 feed. Both comments and pings are currently closed.