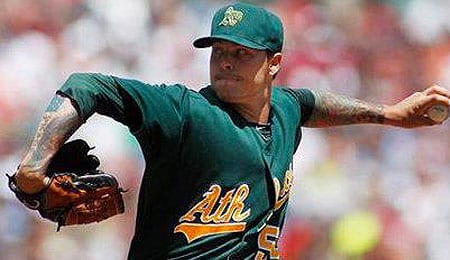 Travis Blackley is forcing his way into the A’s rotation plans.

This weekend marks the end of Interleague play and a return to normalcy in our game, although plenty of excitement awaits. We should get the opportunity to see the much anticipated return of both Chase Utley and Stephen Drew this week. The injury to Joe Saunders in Arizona has done nothing but fuel our appetite for a Trevor Bauer sighting. The incessant Anthony Rizzo callup rumours could be coming to an end as Tuesday could see his much-anticipated debut for the Cubbies.

The time for grabbing any of these players has come and gone in most leagues, but one last check of the waiver wire never hurts.

Moving onwards and upwards let’s give this week’s Troll options the once over.

Travis Blackley, SP, Oakland Athletics (CBS: 2 per cent owned, ESPN: 1 per cent): Did anyone see this one coming? We’ve now seen back-to-back quality starts from Blackley, including a gem Thursday against the Dodgers in which he tossed eight innings of three-hit ball. Granted it was against the Padres and Dodgers — two teams not known for their offensive prowess — but on a team with more wounded than walking it should give the 29-year-old southpaw several more opportunities. He’s heading into a two-start week, with the Mariners and Rangers on the agenda. Just be wary of that second start in Arlington.

Jacob Turner, SP, Detroit Tigers (CBS: 21 per cent owned, ESPN: 3 per cent): The 2009 first rounder got the call Thursday to replace the injured Drew Smyly and tossed five solid innings against the Cardinals. Turner’s fine effort couldn’t have come at a better time with the Tigers struggling to keep pace in a tough AL Central. Smyly is scheduled to return to the Tigers rotation this week with a return to Triple-A Toledo in the works for Turner, but don’t dismiss the skills we saw on display. Turner will return to the Motor City at some point this season.

Derek Norris, C, Oakland Athletics (CBS: 6 per cent owned, ESPN: unowned): The A’s have finally grown tired of watching Kurt Suzuki struggle and have turned to Norris. One of the key components in the Gio Gonzalez deal, Norris has been hitting exceptionally well at Triple-A with eight homers, 36 RBI and a decent .273 BA. He’s widely regarded as one of the top catching prospects in the game, so expect him to see regular at-bats in the Oakland lineup. Norris should be owned in all two-catcher formats.

Joaquin Benoit, RP, Detroit Tigers (CBS: 19 per cent owned, ESPN: 13 per cent owned): Jose Valverde hasn’t been the monster we saw in 2011 and is currently dealing with a wrist issue. Benoit and possibly Phil Coke are the obvious choices to slide into the closer role should Valverde continue to struggle. A preemptive claim could prove prudent.

John Mayberry, Jr. 1B/OF, Philadelphia Phillies (CBS: 26 per cent owned, ESPN: 12 per cent owned): Big John’s bat is finally waking up as he’s smacked four homers and driven in 10 runs in his past eight games. Labeled a sleeper prospect by many heading into the 2012 season, he’s poised to demonstrate that his 2011 second half in which he hit 10 homers and drove in 30 runs was no fluke.

Lorenzo Cain, OF, Kansas City Royals (CBS: 28 per cent owned, ESPN: 2 per cent): What a tough luck year it’s been for Cain. The young speedster started the season on the DL with a groin issue and just as he was wrapping his rehab he managed to tear his left hip flexor. Cain is now rehabbing at Double-A Arkansas and, assuming he can stay away from further injuries, he should be activated before the All-Star break. His power-speed combination will be a welcome addition to the Royals’ offense.

Salvador Perez, C, Kansas City Royals (CBS: 29 per cent owned, ESPN): We mentioned a couple of weeks back that Perez’s return was imminent and with only a 29 per cent ownership level at CBS a lot of people weren’t listening. He was activated Friday and promptly went 2-for-4 with a homer and two RBI in his 2012 debut. It’s now or never if you have plans for acquiring the young backstop.

Chris Nelson, 2B/3B, Colorado Rockies (CBS: 3 per cent owned, ESPN: 1 per cent): Nelson is finding his power stroke with two homers and six RBI in the past five games.

Marco Estrada, SP, Milwaukee Brewers (CBS: 5 per cent owned, ESPN: unowned): With a solid second rehab start under his belt, a return to the Brewers rotation is right around the corner.

Glen Perkins, RP, Minnesota Twins (CBS: 7 per cent owned, ESPN: 2 per cent owned): Perkins is 2-for-2 closing out games while normal closer Matt Capps has been dealing with some minor shoulder inflammation. Capps’ wing isn’t getting any better and he may wind up on the DL. In the meantime, Perkins needs to be owned.

Stephen Drew, SS, Arizona Diamondbacks (CBS: 42 per cent owned, ESPN: 16 per cent): Drew and his surgically-repaired ankle should be rejoining the D-Backs mid-week. If you’re in need of middle-infield help, you should be paying close attention.

Jair Jurrjens, SP, Atlanta Braves (CBS: 30 per cent owned, ESPN: 8 per cent): Somewhere on the trip between Triple-A Gwinnett and Boston he remembered how to pitch.

Chris Archer, SP, Tampa Bay Rays (CBS: 13 per cent owned, ESPN: 1 per cent): Archer had a great debut, but with Jeremy Hellickson slated to return this week, his days in Tampa Bay are numbered for now. Archer’s debut, however, was a great wakeup call if you’re playing in Dynasty formats.

Dylan Axelrod, SP, Chicago WhiteSox (CBS: 1 per cent owned, ESPN: unowned): Axelrod’s debut was rather inauspicious, but he did post solid numbers down on the farm. John Danks and Philip Humber aren’t returning to the ChiSox rotation anytime soon.

Dallas Keuchel, SP, Houston Astros (CBS: 2 per cent owned, ESPN: unowned): In his debut, Keuchel held the mighty Ranger offense in check and followed that up by tossing a complete game six-hitter against the Tribe for his first win. He was originally thought to be a short-term solution while Bud Norris is on the mend. That train of thought could be changing.

Carlos Marmol, RP, Chicago Cubs (CBS: 40 per cent owned, ESPN: 49 per cent): I lied. The post on May 27 was my second last mention of Marmol this season.

Will Middlebrooks, 3B, Boston Red Sox (CBS: 68 per cent owned, ESPN: 43 per cent): The Kevin Youkilis trade rumours continue to escalate and the BoSox are now committing to Middlebrooks full-time at the hot corner. It’s worth taking one last look to see if he escaped the waiver wire hawks.

By Tim McLeod
This entry was posted on Sunday, June 24th, 2012 at 1:10 pm and is filed under BASEBALL, The Wire Troll, Tim McLeod. You can follow any responses to this entry through the RSS 2.0 feed. Both comments and pings are currently closed.