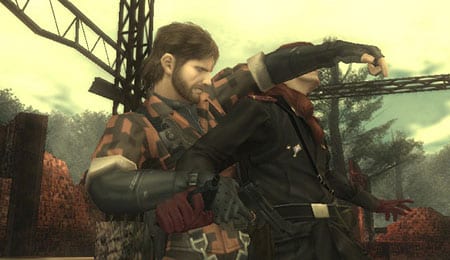 Gotta love Snake’s ‘do. Business in front, party in the back.

Although the PlayStation Vita launched with a pretty respectable lineup of titles, pickings have been noticeably slim in recent months. Thus, the porting of Konami’s late-2011 console release, Metal Gear Solid HD Collection, should be a welcome sight for longtime fans and entertainment-starved Vita owners alike as the bundled games remain among the best seen in the past decade-plus.

By and large the loss of the shoulder buttons is handled well with most of the control frustrations due to the original releases’ limitations, such as the inability to walk while crouching or freely move the camera (in MGS2). The touch screen implementation is modest yet important. Most notably you now scroll through your equipment by pressing on a box in either corner — a quick tap toggles between your last selection and being unarmed, while holding it down allows you to scroll through all your options. It’s a bit imprecise, but with a little practice you shouldn’t have much trouble.

There’s a lot to process visually in these titles, including some very nice detail work, but the Vita’s OLED screen handles it like a champ. Even the opening section of MGS2, with rain pouring down at night on the deck of a ship, appears clear and crisp, and when you move to MGS3 it looks fantastic. Outside of the occasional drop in frame rate there is very little to complain about here.

Lengthy exposition has long been part of the Metal Gear world, and the voice acting remains strong throughout the collection. The sound effects are good and instantly recognizable (“!”), while the score does a nice job of matching the action.

Alright, let’s just get this out of the way. Yes, the Vita release is priced identically to the Xbox 360 and PlayStation 3 versions. No, it does not include Metal Gear’s PlayStation Portable offering Peace Walker. Call it a money grab if you must — Peace Walker is available to download separately through the PS Store — but understand the package still comes loaded with two of the best PlayStation 2 titles of all time along with the first two Metal Gear games from over 20 years ago. So, there’s still plenty to sink your teeth into.

For anyone unfamiliar, Metal Gear Solid 2 casts you in the dual role of Snake during the early portion of the game and Raiden for the main section. Here you’re tasked with rescuing the President of the United States from a terrorist group known as the “Sons of Liberty” from an offshore clean-up facility.

Meanwhile, Metal Gear Solid 3: Snake Eater is actually a prequel to MGS2, taking place roughly 40 years before the events involving Raiden. Here Snake is caught in a nuclear crisis circa the Cold War and must prove the United States’ innocence (among other things) in an international incident to avert war with the Soviet Union. Both titles are heavily stealth-based and revolve around avoiding contact and/or taking out unsuspecting foes covertly.

As well as these games stand the test of time, there are moments when the gameplay feels outdated, such as the aforementioned inability to walk in a crouched position, which is a pretty annoying omission given the importance of covertness. Aiming and shooting will also take some getting used to for first-time players (or those that haven’t picked it up in a while) as holding down a button to aim and then releasing it to fire feels odd. They’re mostly minor, though they do serve as subtle reminders that marked progress has been made since these games first hit store shelves.

Those that own the PlayStation 3 version and are interested in taking Snake on the road with them will find some new cross-platform functionality available as well, including trophy support and the ability to transfer saves between the versions. As I do not own the Metal Gear Solid HD Collection on PS3 (I have it on Xbox 360) I was not able to test it, but it worked like a charm with MLB 12: The Show so I have no reason to doubt it’s just as smooth here.

Despite the Peace Walker omission, the Metal Gear Solid HD Collection on the Vita is a great buy as you’re treated to the definitive versions of two of the PlayStation 2’s best games. Unless you’ve never warmed to the series or already picked up the collection on another platform, this is a quality purchase.

By Herija Green
This entry was posted on Monday, June 25th, 2012 at 12:36 pm and is filed under Herija Green, Video Game Reviews. You can follow any responses to this entry through the RSS 2.0 feed. Responses are currently closed, but you can trackback from your own site.