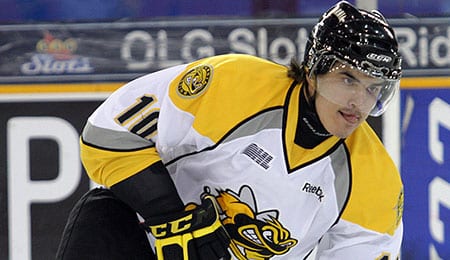 The Oilers surprised no one when they plucked Nail Yakupov with the top pick in the NHL Draft.

Friday night marked the start of the 2012 NHL Draft, a process that will be completed Saturday.

This is an extremely exciting weekend for prospect hounds, as youngsters you may have been tracking for years suddenly become legitimized to an extent, as their NHL journey begins in earnest.

For keeper league owners, staying on top of this weekend’s events is vital. With that in mind, we offer you a recap of the first 10 picks of the first round, complete with brief bios of each player.

1. Edmonton Oilers: Nail Yakupov, RW: The most talented Junior available, Yakupov marks the third straight No. 1 overall selection by the Oilers. This pick was no surprise at all. Yakupov was racking up points faster than Steven Stamkos, Taylor Hall, Tyler Seguin and John Tavares in their draft years, however, a knee injury slowed him down. It’s not a serious health concern.

2. Columbus Blue Jackets: Ryan Murray, D: Murray continues the long trend of great defenceman who have come out of the Western Hockey League. There were rumours the Oilers would grab Murray with the top overall pick – and addressing their needs on the blueline is something they better do in later rounds. Instead, it is Columbus that made a big move to improve its defense with this pick. Murray was at the head of the class of a draft that was decidedly top-heavy with defencemen.

3. Montreal Canadiens: Alex Galchenyuk, C: Montreal needed someone it can rebuild around, and Galchenyuk fits the bill. He missed almost the entire season with a torn ACL, yet he still ranked as one of the top five skaters available in North America. This kid has mad skills and the Canadiens are banking that landing a skilled centre is the first step in turning their team around.

4. New York Islanders: Griffin Reinhart, D: Like many young defenceman, Reinhart may not be ready to step in and contribute at the NHL level right away. GM Garth Snow made no secret that the team needed a top blueliner to add to the Isles’ collection of skilled young forwards, so this pick was no surprise and it kicked off a run of seven straight d-men being grabbed. The son of former NHL defenceman Paul Reinhart gives the Isles their first defenceman selected in the top 10 of a draft since 1997.

5. Toronto Maple Leafs: Morgan Rielly, D: This is the player the Leafs apparently wanted all along. Another player who’s season was truncated by an ACL injury, Rielly’s selection by the Leafs continues the team’s tradition (since Brian Burke arrived) of trying to build out the blueline. Rielly, like Reinhart, is from the WHL, but isn’t nearly as big (6’0”, 200).

6. Anaheim Ducks: Hampus Lindholm, D: Tampa Bay, picking at No. 10, reportedly coveted Lindholm, but he went several picks before the Lightning got to the podium. A lot of experts were quite surprised that the Ducks grabbed Lindholm here, so this may have been the first reach of the draft. Could the Ducks have traded down a couple of picks and still drafted Lindholm? Small wonder many of their fans aren’t pleased. Either way, it will be at least a year before we get a sense of how wise a selection this was; Lindholm is headed back to Sweden for another season of development.

7. Minnesota Wild: Mathew Dumba, D: There were a few nice forwards sitting here when Minnesota’s turn came, but it opted to use its top pick on the strength of the draft – defence. A skilled two-way defenceman, Dumba can shoot the puck and enjoys playing physically. The Wild wanted this physically strong blueliner, and it got its man.

8. Pittsburgh Penguins: Derrick Pouliot, D: Yup, it’s yet another WHL blueliner. Pouliot is coming off a breakout season offensively during which he potted 11 goals and 48 assists for 59 points (fourth highest among WHL defenceman last season) in 72 games for the Winterhawks. Of course, it was how Pittsburgh got this pick that superseded the actual pick itself. By sending Jordan Staal to Carolina to play with his brother Eric, the Pens were able to land the eighth overall selection, creating a splash in a draft they were hosting.

9. Winnipeg Jets: Jacob Trouba, D: Selected from the USA under-18 team, Trouba is a 6’2”, 187-pound defenceman. GM Kevin Cheveldayoff is starting to collect a nice selection of young talent for the future of the Jets, adding Trouba to a list that includes Ivan Telegin, Mark Scheifele and Zach Yuen. Trouba, a University of Michigan recruit, is the first Michigan hockey program product to go in the first round since 2007, when Montreal grabbed Max Pacioretty.

10. Tampa Bay Lightning: Slater Koekkoek, D: This Peterborough Pete was highly coveted by us Flyer fans, who were somehow hoping that his injury history would allow him to slide to 20. Fat chance. The final blueliner of the run of seven straight, Koekkoek is a good Canadian kid who was racking up the points (18 in 26 games) before a shoulder injury ended his 2011-12 season early. The fact that Koekkoek was picked before European gunners Flip Forsberg and Mikhail Grigorenko speaks volumes about most team’s need to improve their defense corps.

By RotoRob
This entry was posted on Saturday, June 23rd, 2012 at 3:32 pm and is filed under Draft report, HOCKEY, Prospects, RotoRob. You can follow any responses to this entry through the RSS 2.0 feed. Both comments and pings are currently closed.