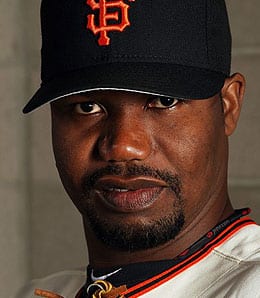 Today, we’re going to keep it short and pithy with a few observations to help ease you into the weekend.

Why doesn’t Guillermo Mota just retire already? Now with the Giants, he’ll be 39 next month and is about five weeks into his latest PED suspension – a 100-game ban that made him just the third big leaguer to earn multiple drug related suspensions. Well, that’s carving your place in history, we suppose. The last time Mota looked useful was in 2009 for the Dodgers, when he was named replacement closer in place of the injured Jonathan Broxton, yet he never did earn a save.

We ranked Jay Bruce 11th among outfielders, but he’s barely been a top 25 flyhawk so far. The streaky and not exactly fleet of foot outfielder launched his first ever inside the park dinger Friday. Assuming he’s not still out of breath, maybe this will spark Bruce to go on one of his patented runs. He has driven in runs in four straight games despite the fact that the inside the parker is his only hit over this stretch. Bruce got off to a great start, struggled in May, and has somewhat rebounded in June thanks mostly to the whopping 10 walks he’s already drawn this month.

After his awful start, Justin Masterson is now worth a look in all formats. A top 45 SP heading into the season, he hasn’t even performed like a top 100 – until recently, that is. Masterson is looking better and better as the season progresses and has been sharp in eight of his past 10 starts, including Friday’s seven shutout frames with nine Ks. Grab him while you can.

Can we finally anoint Ryan Dempster as a must-own pitcher again? We ranked him as the 75th best starting pitcher in the preseason, but he’s been a top 20 hurler. Especially lately. Friday, he enjoyed his third straight start without giving up an earned run, continuing to up his trade value for the Cubs. At the age of 35, this Canadian has never been harder to hit, but given his .235 BABIP (his career mark is .301), we’d recommend you sell high on Dempster.

The Tigers seemed to finally be righting the ship. Then came Friday. Detroit gave up eight runs in the top of the 10th inning to a struggling Colorado squad en route to a demoralizing 12-4 loss as a season with such promise just can’t seem to develop any momentum. Closer (and spitball master) Jose Valverde’s effort was the latest lowlight in a season filled with them. He suffered the loss thanks to giving up three hits, two walks and six runs (one earned) in two-thirds of an inning. We’ve been touting Joaquin Benoit for over a month now, and his chances of overtaking Valverde seem to be growing by the day.

By RotoRob
This entry was posted on Saturday, June 16th, 2012 at 3:08 pm and is filed under BASEBALL, MLB Today, RotoRob. You can follow any responses to this entry through the RSS 2.0 feed. Responses are currently closed, but you can trackback from your own site.