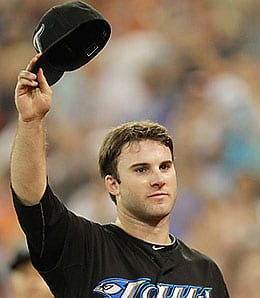 Should you sell high on Brandon Morrow?

When we ranked him as a top 40 starter heading into the season, we marveled at his back-to-back seasons with a strikeout rate north of 10.

Well, that rate has plummeted to just 7.86/9 this season, yet he’s emerged as a top 10 starter on the strength of improved control and a higher groundball rate.

Unfortunately, the news isn’t all good with Morrow. He’s giving up home runs more often and he’s been the beneficiary of a very low BABIP (.221) and a higher than usual strand rate (76.9 per cent).

There’s no doubt that Morrow’s xFIPs and other peripheral numbers in recent seasons suggested that he deserved better bottom line stats than he had. But now, we fear, he is enjoying results (2.22 ERA, .200 BAA) that are unsustainable. He’s good – damned good – just not this damned good.

In looking at his last two starts (the second of which ended in a loss, snapping his career best four-game win streak), Morrow’s strikeouts are up (17 in 11 IP), but so are the walks (eight).

Is he reverting to his old form? If that’s the case, Morrow is a great sell high candidate while his numbers remain attractive. In fairness, Monday’s rough start was really just one bad inning, so if you own him, stay the course for now – unless you get blown away by an offer.

But if he starts to walk more batters going forward, consider it a red flag. The key for Morrow – as it always has been – is his ability to get ahead of hitters in the count.

By RotoRob
This entry was posted on Wednesday, May 16th, 2012 at 9:06 pm and is filed under BASEBALL, MLB Today, RotoRob. You can follow any responses to this entry through the RSS 2.0 feed. Both comments and pings are currently closed.