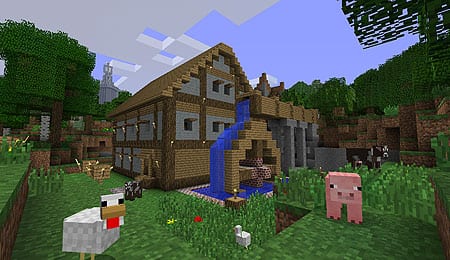 Old McDonald has nothing on this sweet looking Minecraft farm.

As I’ve noted many times, I am a console gamer. That means no PC, no phone and no tablet games. As such, I was very much looking forward to the fourth and final week of Xbox Live’s Arcade Next, which signaled the arrival of Minecraft on the Xbox 360. I had a general idea of what the game was all about, but I was surprised at just how easily I was sucked into its blocky world.

When PC games that rely on point-and-click mouse controls are ported over to controllers, the worry is that too much precision will be lost and you’ll end up with a clunky setup. By and large, Minecraft avoids this fate. Navigating and mining feel natural on the controller, leaving only a sometimes aggravating inventory system to deal with. Crafting items are separated and can be tabbed through quickly, but the overall inventory interface is somewhat shaky.

From a technical aspect, Minecraft is comically outdated. Of course, those blocky pixilated visuals have become iconic among gamers so any change would have been rejected. That’s because, despite their simplicity, the visuals pack an undeniable charm. The world is massive and feels somehow alive even with its clear disconnect from reality. There are probably a certain percentage of gamers that won’t be able to get past it, but that’s to their detriment.

The soundtrack is generally calm and serene; at first I didn’t think I’d like it. It grew on me, though, and fits perfectly with the generally leisurely pace of the game. Sound effects are good with all the basic animal noises covered and even a surprisingly creepy zombie moan.

In some ways it’s hard to describe Minecraft in regard to its purpose as a video game to someone that was entirely unfamiliar with the concept. There is no story, no characters, no dialogue, no bad guy and no definitive motive for playing. You are plopped into a vast world armed only with a map and your bare hands and told, “OK, create something.” And therein lays either the title’s greatest strength or most glaring weakness, depending on what you’re looking for from a video game.

If you’re someone that really values freedom and creativity for their gaming dollar, it’s tough to get much better than this. As long as you’re willing to put in the time, there is little you cannot do. Essentially, the game breaks down into you mining cubes of various materials, which are then used and combined to construct new objects — many of which can then be merged further to create more complex and valuable items.

Early on you’ll likely be working hard to get a small homestead going, which means busting down trees for wood and then processing the wood into planks for construction. Amazingly, every item you find in Minecraft seems to have one or more uses so there can be a lot to digest. One nice time-saving feature is that if you push the left bumper while viewing something, an in-game tutorial pops up and gives you a breakdown of that item and what can be done with it. For example, cows can be hit until they turn into leather… or, if you have a bucket, they can be milked.

Not everything in Minecraft is friendly, however, and when day turns to night, all sorts of unsavory things show up to come after you. Zombies, spiders, the infamous creepers and more will attack you with a relentless fervour if you choose to stay out after dark. You are able to build weapons and armour to defend yourself, but for most the preferred course will be to sleep the nights away. That’s because if all of your hearts are depleted you’ll be sent back to the last bed you slept in, and all the items you were carrying will remain where you were killed. If you’re close to home it’s not an issue, though if you’d become lost or had traveled far it can be frustrating to lose your stuff.

However, while the game offers a ton of things to do, it never directs you to do a single one of them. You are truly on your own outside of an admittedly solid tutorial mode, and if you lack the initiative to build the proverbial “better mousetrap” this won’t be for you. It takes a significant time investment to truly immerse yourself and start shaping your randomly generate cube world into something unique. If that doesn’t sound like you then your money is better spent elsewhere.

For those that are interested in taking the plunge, Minecraft also offers up multiplayer action locally as well as through Xbox Live. This is a surprisingly cool feature and one that is slickly handled with the ability to join or invite being very simple. It’s also another way to enjoy the game if you feel like mixing it up and traveling to another player’s world or bringing them into yours.

If I may dip back into my book of axioms, Minecraft is the epitome of a game where you get out of it what you put into it. So if you’ve got the imagination and resolve to put in the hours necessary to do something special, this could be the best 1,600 MS Points (US$20) you spend all year.

By Herija Green
This entry was posted on Tuesday, May 15th, 2012 at 6:10 pm and is filed under Herija Green, Video Game Reviews. You can follow any responses to this entry through the RSS 2.0 feed. Both comments and pings are currently closed.