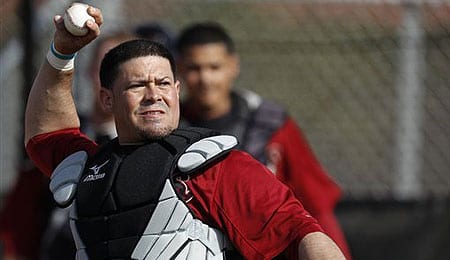 Humberto Quintero has been dealt to the Royals where he’ll resume his Fantasy irrelevance.

Another Thursday has come and gone meaning it was time for another episode of RotoRob’s Fantasy Baseball Weekly Podcast, once again this week a March Madness distracted version thereof. Buck, Tim and I still found time to discuss RotoRob’s new job with the Saints and Tim’s taste in video games (Pong? Really?). Prickles the hedgehog was also front and centre in this week’s episode. Oh… and we also covered a shitload of Fantasy baseball related matters, such as:

Hear all the hilarity and Fantasy baseball goodness by clicking the play button below.

By RotoRob
This entry was posted on Friday, March 23rd, 2012 at 11:39 am and is filed under BASEBALL, Buck Davidson, Podcast, RotoRob, RotoRob's Fantasy Baseball Weekly. You can follow any responses to this entry through the RSS 2.0 feed. You can leave a response, or trackback from your own site.