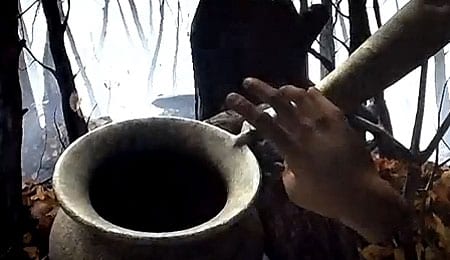 This floating hand follows your PS3 Move input. Kind of.

Datura both puzzled and impressed critics when it was previewed at various game industry shows. Its stark atmosphere and use of one-to-one Playstation Move tracking — along with the fact that it was developed by the folks who created the cult hit Linger In Shadows — raised expectations for a truly unique experience. Now that it’s released, it’s plain to see that the “unique” part has been fulfilled. The rest of it? Well…

Datura is primarily an adventure/puzzle game, which means that controls aren’t nearly as critical as a platformer or a shooter. That being said, it’s not the most user-friendly game as it’s designed primarily to be a Playstation Move experience. (Note: You can use a traditional Dualshock controller but this really is meant to use the Move.) The weird thing is that the developers didn’t provide the option of using the Move navigation controller, which means you’re stuck with the clunky movement (no pun intended) scheme.

Control is primarily divided into two types — moving around the environment and doing Move-specific actions to interact with objects. For basic movement, the Move button advances you forward, the circle button puts you in reverse, and angling the Move around steers your direction, much like driving a car. The cross button allows you to angle around without moving forward, though sometimes this doesn’t feel accurate.

An icon appears when you get close to any interactivity. This prompts you to press the triangle button, which then overlays a Move icon for your action. For example, early on, you have the opportunity to collect water from a drain. The triangle button brings you up close, then the water starts flowing. Using a vase you collected earlier, you use the Move to angle the vase to fill it up with water. Across the courtyard, you have the opportunity to pour the vase’s water into a pot — another triangle/Move event.

When it works, it’s really cool — there’s a real sense of satisfaction using an ice pick in real time/tracking to break through an icy block or turning a victrola at the proper rate to hear music. The problem is that the detection isn’t always accurate. For about a third of the Move interactions, it started with me mimicking the on-screen icon with no result, followed by a series of curse words. Sometimes recalibrating the Move takes care of this and sometimes, well… you just need to go get a sandwich or something and come back when the Playstation Gods have smiled upon you.

Overall, the controls get a 2 for execution and 4 for ambition/creativity when it does work, which averages out to a 3.

Since Datura is broken up into modern day and ethereal environments, there are two distinct art styles. The modern day one is claustrophobic and dimly lit, with human models looking a little clunky. Fortunately, you’ll spend most of the day in the large, mysterious, and very foggy courtyard (and its off-shoot locations). It’s foggy in a Silent Hill kind of way, but the starkness of the world is very much like 1990s first-person adventure games (Myst, The 7th Guest). While this paints a pretty picture from afar, there really aren’t too many areas where you’ll be blown away by the graphics. In some cases, scenes from Datura could stand in as high-def screen savers — an eerie courtyard with leaves blowing everywhere and a strange statue off in the distance.

The music is meant to enhance the atmosphere, and it does in the courtyard areas. For the modern-day scenes, the music feels ripped from a David Fincher crime drama, which kind of goes against the sense of isolation and mystery presented by the game. Sometimes, less is more; in the case of Datura, the developers could have made a greater impact on several moments by removing music altogether.

Datura flips between moving around a big foggy courtyard and present-day flashbacks — it’s like David Lynch directed a Move tech demo. There’s a narrative that kind of puts it together, but it’s fairly vague. That doesn’t mean there aren’t cool things to do or explore. The courtyard section is open-world, letting you traverse through the fog as you see fit. Datura follows the adventure game convention of leaving certain doors (metaphorical and literal) closed until you have the proper object to open them. These moments lead to the Move interaction events. Most of these work well when you actually get the Move to do its job — which, despite the aforementioned criticisms, is effective the majority of the time. Depending on how invested you are in the vague narrative, this either puts pieces together or acts as gateways to unconnected puzzles. Some of these events present moral choices, encouraging a second playthrough to see how things work out.

That’s really the problem with Datura. It has the groundwork to use the Move as a platform for first-person adventure gaming (some refinements are definitely required, though), but it fails to realize its potential and winds up feeling more like an art project than anything else. It’s a testament to how the Move can innovate interaction, but the next step still needs to be taken.

Datura is a unique excursion that may please fans of adventure games who happen to own a Playstation Move. Outside of that overlap, there’s not much to Datura that couldn’t be experienced with a 10-minute tech demo. Without an engrossing narrative or strong characters, it’s simply a bunch of motion-controlled puzzles — pretty puzzles, but puzzles nonetheless.

By Mike Chen
This entry was posted on Thursday, May 17th, 2012 at 6:29 pm and is filed under Mike Chen, Video Game Reviews. You can follow any responses to this entry through the RSS 2.0 feed. Responses are currently closed, but you can trackback from your own site.