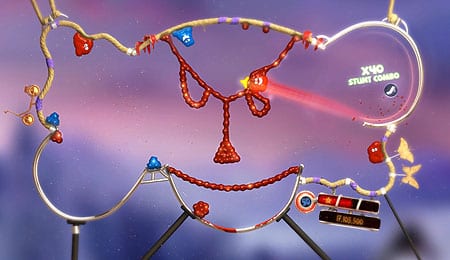 The whole game reminds me of Nerd Rope. I want to eat it.

If I was an uptight TV executive hearing pitches for new shows, and I saw the proposal for one called The Splatters, I’d probably be hesitant to hear more. See, when I hear the word “splatters” all I think of is two things: bloody horror and explosive diarrhea. Too bad I’m not a TV exec because I know deep down that either or both of those would make for good TV. It really doesn’t matter. As it turns out, The Splatters is actually not a TV show, but rather a new puzzler from Spiky Snail Games and Microsoft Studios. And while there’s no blood or liquid poo in this Xbox Live Arcade exclusive, you should still give this fresh and original title some attention.

In this unique 2D physics-based game, players will launch little smiling globs of coloured goop toward same-coloured bombs. If the gooey mass drips and splatters around the bombs for a short period of time, the bombs detonate in a colourful explosion. Explode all of the strategically placed bombs and the stage is cleared. But clearing the stage is only the bare minimum; the true goal is to aim for the biggest point score possible by achieving various “stunts,” which are specific methods of igniting these explosives. Perform different stunts in a row to create combos and score multipliers and watch the points stack up.

Simply start by aiming in the desired direction, launch the mass with the desired force (controlled by the strength of your “A” button press) and let gravity and physics do the rest. There are a few extra tricks to perform some skillful shots — pressing “A” once more before impact performs a mid-air aiming shot and pressing it after impact calls for some post-splatter movement. Aiming for curved surfaces can result in fast slippery goo-gone-wild moments as they act like slides for the coloured blobs. Using the triggers for “flipping,” you can quickly reverse the blob’s trajectory, which can turn these slides into slingshots or simply increase your splatter hang time for skillful droppings on bombs.

While there are common strategies and usage of techniques for each stage, the seemingly sporadic and unpredictable nature of the game’s elements assure many different methods to see your way through. A smidgen turn to the left, a little less juice on the initial launch and some flip tinkering can make all the difference between a standard one-star ranking and the coveted three-star variety.

Anyone who’s played a game of pool or dabbled in Angry Birds knows that there isn’t much “control.” It’s all about mastering the physics, which takes practice and patience. The Splatters is no exception; highly addictive, equally rewarding, but for many gamers, there will be that one stage to get stumped on, submitting them to defeat. The result is stepping away for a while, and perhaps never coming back to finish the job.

Despite featuring nothing more than vibrant colours splashing on thinly framed stages, The Splatters has a top-notch presentation. The elasticity and liquid effects are excellent and every sound and music cue heightens your accomplishments with much fanfare. Detailed zoom-ins, dramatic slo-mos and drum rolls are rewarded when finishing off the stages with style, making you feel like a star player. While certainly not lacking charm through bells and whistles, this puzzler definitely lacks visual variety. The stage layouts are plentiful, but the canvas on which they’re presented becomes pretty drab after realizing it hasn’t changed the past 100 playthroughs.

To welcome you into its unique world of tossing coloured blobs for points, The Splatters starts off with its own introductory stages titled “Become a Talent.” It’s here where you’ll start learning the basics, such as simple launching and aiming, then earn extra abilities and follow along visual tutorials to perform the stunts. Completing these will unlock the remaining two modes. “Combo Nation” sets the stage for high combo count scoring and “Master Shot” challenges gamers with one chance to nail specific stunts.

With a healthy pack of 65 stages, there’s plenty to keep puzzle fans occupied for quite some time. When striving for those handsome three-star ratings, gamers are bound to go through several repeats of these stages, perfecting the techniques and mastering the gooey physics for high score potential. The creativity and usage of its elements that this calls for is remarkable. For example, strategically aim for sloping surfaces to flip your blob at high speeds to snap into a spiked ceiling, then flip the drippings to drizzle hard-to-reach bombs. You’ll want to high-five yourself when you pull it off! The online leaderboard community is very encouraging with the ability to upload your best run-throughs for fellow Splatters fans to download and watch. It’s not only good for your own bragging rights, but it will also inspire a solution to stages that others might be stuck on.

However, even when you see the solution performed before your very eyes, sometimes offered by the game itself in forms of visual hints, mastering the timing and technique can be a pain to overcome. There’s a certain level of repetitiveness you have to prepare for to be top Splatter dog. The initial charm and fun potentially wears down after the introductory stages for those looking for instant gratification. But if you’re looking for a quality brain teaser, The Splatters has what it takes to challenge your noggin, especially the Master Shot challenges. Want further incitement? The menu is set for downloadable content, which will more than likely feature new stages in the future and unlockable avatar and gamer pic awards come along with the bundle.

Available exclusively on Xbox Live Arcade for 800 MS Points, The Splatters offers a physics-based puzzle experience unlike anything else while still containing familiar elements of the genre. Colourful presentation, easy controls and a strong online leaderboard community are great lures to this quality puzzler, but the requirement of hefty practice and mastering of techniques may intimidate casual players.

By Jess Castro
This entry was posted on Wednesday, April 25th, 2012 at 5:58 pm and is filed under Jess Castro, Video Game Reviews. You can follow any responses to this entry through the RSS 2.0 feed. Both comments and pings are currently closed.