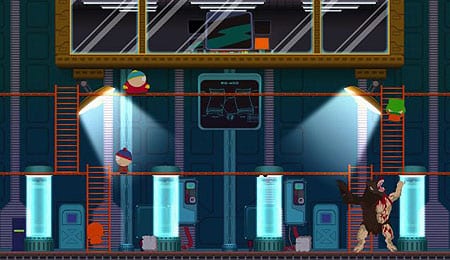 Four boys. One Man-Bear-Pig. Who wins?

South Park fans know who Scott Tenorman is — he’s the Ginger half-brother of Eric Cartman, which means that Cartman has done some really, really awful things to him. Now, in South Park: Tenorman’s Revenge, Tenorman has his, um, revenge by stealing the hard drive from Cartman’s XBox 360 and thus changing the present and future. Things go off the rails in typical South Park fashion, and with full use of the series’ assets, writing team, and voice cast, it’s a true South Park experience. Is it fun to play? Well, that’s another question.

For platformers, strong controls are a must. There’s nothing worse than missing a critical jump, and that’s one of the first major missteps of Tenorman’s Revenge. Whether solo or co-op, you take control of one of South Park’s main characters: Stan, Kyle, Cartman, and Kenny. Jumping is key to the game, not just for movement but for jumping on enemies to kill them. Unfortunately, jumping feels floaty, so it’s sometimes hard to get a grasp of where you want to go.

There are other ways to attack enemies, as the “X” button shoves them down — a necessity at times if they have spiky red hair — or uses a weapon. The “A” button activates the boy’s special power (Kenny has a super jump, Cartman bumps through walls, etc.). The “X” button also grabs objects, with the “RB” button used for throwing them. This is also problematic, as it’s not easy to throw or even drop stacking crates where you want them to go — a frustrating exercise if you need to get higher to collect something.

Tenorman’s Revenge is pretty much exactly what you’d expect a South Park platformer to look and sound like. The boys move like they do in the show, the voices are spot on, and other assets (cut scenes and special graphics) are taken straight from the show. Someone in the other room would think that you’re watching the show, albeit an uncensored version as the curse words fly fast and furious. Even the different level aesthetics sync right up with what you’d expect.

The graphics and sound provide a lot of the charm for Tenorman’s Revenge, which is good because they mask a lot of the game’s flaws. How much so depends on your own affinity for the show.

Level design is so critical for the platformer genre. When it’s done right, it’s the proper mix of tension and exploration. When it’s done wrong, you’re jumping around to collect stuff. Tenorman’s Revenge levels fall squarely in the latter category. The goal is to collect Time Cores throughout each level, many of which require each boy’s special powers (encouraging co-op or at least replaying levels). Had the developers included the ability to switch characters mid-level, this would have opened up the single player experience quite a bit. Without it, you’ll see stuff that you could have used Kenny’s super jump for and just groan with frustration.

Enemies spawn and meander about; you can defeat them simply by jumping on them or if you have a weapon (bat, crowbar, etc.), that works too. Boss fights bring out many recognizable characters from the show, and they’re not particularly difficult to defeat, especially if you’ve got a few buddies on your side.

In fact, co-op is probably the only way to really enjoy the game outside of its presentation. The single player experience features levels that are too unfocused and slow to enjoy on your own. As a team, it helps because you know you’ll be able to tackle most of the challenges; on your own, you’ll see an area and wonder if you have the right character or if you’ll have to replay the whole thing again once you beat the level and save.

When it comes to classic video games, many fantastic 2D platformers stand out. From Super Mario to Sonic The Hedgehog, strong platformer design is an art in and of itself. South Park: Tenorman’s Revenge, while providing fantastic uses of its license, fails to learn from the standards in the genre and thus winds up being a ho-hum game with fantastic voiceovers — though a four-player co-op certainly elevates the experience. If you love South Park, this deserves a playthrough for all of its fan service. Otherwise, it’s probably not worth your time unless you plan to co-op through it.

By Mike Chen
This entry was posted on Wednesday, April 18th, 2012 at 12:05 am and is filed under Mike Chen, Video Game Reviews. You can follow any responses to this entry through the RSS 2.0 feed. Both comments and pings are currently closed.