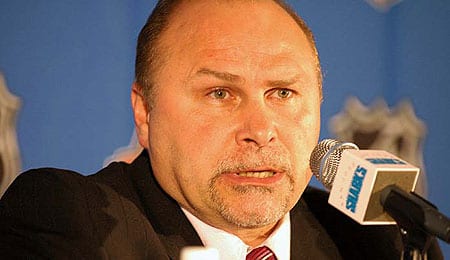 How big will Barry Trotz’s head get if the Preds take out the Wings?

It is always tough to say goodbye to anything. However, with the Fantasy hockey playoffs now complete and an extra week passed to let it all sink in, this was a just time to bid adieu to the 2011-12 Fantasy season. Hopefully you followed us all season and took heed to some of our picks (even the odd ones). We did notice that for whatever reason, rotisserie and point league GMs seemed to be quite appreciative.

When you consider how all of this works in the grand scheme of things, just think about how “waiver wire” picks can win or lose your league. This is why we are writing this, not because of what went right or wrong but just because of the importance of a lost art in Fantasy hockey.

The goal of The Wire Troll is to use a “30 per cent standard” when looking at the waiver wire, meaning we tend to focus on players available in at least 70 per cent of all Fantasy leagues. It is always the hope that there are finds that maybe not as many are looking for. There were so many single digit ownership pickups that were made in the early and late portions of the season. When digging so low, there are occasions when chasing category-specific finds is quite viable. Always think wisely when considering such players for your pool or team.

As we look ahead to next season, let us consider once more the following criteria we used this season for inclusion in the Wire Troll:

That is just for starters, but we won’t be resting on our laurels. Here is what we intend to add to next season’s Wire Troll:

Some readers have been clamouring for these additions for a year now, but it was kind of a prevailing thought that what we had was good enough. This is just not the case anymore. For instance, this season there were quite a few instances when we had to do extra research on pickups that did not quite make the floor of The Wire Troll.

Our goal is to let everyone see more of what goes into the process. Granted, this may cut down on the amount of pickups put into each column, but knowing the process may help Fantasy general managers be able to identify markers more accurately.

Simply there is no way we can really adequately thank everyone for making this column possible. It was a long road over the last 26+ weeks and there were some considerably nasty bumps along the way.

This is where we leave the floor to the readers and editors. Are there any changes you would like to see? We would like to hear from you because this is your column even more than ours. Winning your leagues and competing well in them is the most important goal. Once again, thank you and we look forward to all the feedback.

By Chris Wassel
This entry was posted on Monday, April 16th, 2012 at 8:14 am and is filed under Chris Wassel, HOCKEY, The Wire Troll. You can follow any responses to this entry through the RSS 2.0 feed. Both comments and pings are currently closed.