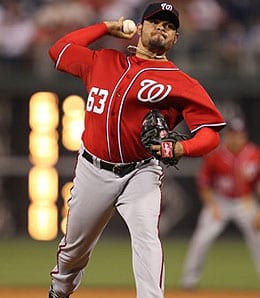 Henry Rodriguez could have value even after Drew Storen returns.

Welcome back to another year of waiver wire prognosticating with the MLB version of The Wire Troll. We’ve seen Dan Haren, Yovani Gallardo, Madison Bumgarner, CC Sabathia, James Shields and who knows else get smacked around in the early going. Do not panic. As we always say, ’tis a marathon, not a sprint. The cream will always rise to the top.

The closer situation around the game continues to be causing one giant headache and now that the first rush of replacements, namely Jonathan Broxton, Alfredo Aceves, and Sean Marshall have been snatched up, we’re going to focus on the second wave of relief pitchers that will be earning value at the back end of bullpens in the early going. Without further ado let’s give this week’s Troll options the once over.

Hector Santiago, Chicago White Sox (CBS: 15 per cent owned, ESPN: unowned): Have the questions finally been answered in the White Sox pen? On Saturday, Matt Thornton — considered to be the favourite for the job — entered the game in the eighth inning and was followed by Santiago, as the rookie southpaw earned his first save with a one-two-three ninth. This spring, Santiago assembled a miniscule 0.82 ERA and 13 strikeouts in 11 IP and has taken advantage of that first opportunity. The leash will be short, but he’s currently got the endorsement of both Manager Robin Ventura and RotoRob and that’s more than good enough for me.

Henry Rodriguez, RP, Washington Nationals (CBS: 11 per cent owned, ESPN: 1 per cent): Brad Lidge was the popular choice amongst Fantasy owners to replace the injured Drew Storen, but the Nationals didn’t appear to be listening and have gone with a job share situation. Rodriguez earned his first save Saturday with three punchouts in the ninth and the radar gun was being stressed to its limits as he brought that triple-digit heat into play. Rodriguez’s high walk rate will be cause for some concern, but his outstanding strikeout rate will provide value even after the return of Storen.

David Robertson, RP, New York Yankees (CBS: 22 per cent owned, ESPN: 9 per cent): If there was ever a time to be investing in quality setup guys, this would be the time. Robertson is coming off an absolutely ridiculous 2011 campaign and Mariano Rivera is no spring chicken. In his season debut, Robertson continued the trend with three punchouts against Tampa Bay. A sprinkling of saves and off-the-chart peripherals await his owners; Robertson is money in the bank.

Rafael Dolis, RP, Chicago Cubs (CBS: 1 per cent owned, ESPN: unowned): It’s time to toss some mud at the old proverbial wall. Carlos Marmol and Kerry Wood have sucked it up big time in their first two appearances, blowing two games and amassing a combined total of seven hits, five walks, and six, yes six, earned runs in two innings. Dolis has worked his way back from Tommy John surgery that caused him to miss the 2008 campaign and finds himself next in line should Marmol and Wood continue to struggle. Don’t be at all shocked to see Dolis entering the game in a save situation in the imminent future.

Jordan Schafer, OF, Houston Astros (CBS: 12 per cent owned, ESPN: unowned): After spending most of the spring dealing with a sprained left hand, the Astros’ leadoff bat got it going Saturday slugging a homer and driving in two runs. In 2011, Schafer managed 22 thefts in 26 chances and with his hand injury out of the way, he looks to bring mid-20s stolen base potential and a smattering of homers to the table.

Bryan LaHair, OF, Chicago Cubs (CBS: 24 per cent owned, ESPN: 2 per cent): Last year, LaHair mashed 38 homers and drove in 109 runs in 456 at-bats for Triple-A Iowa. The Cubs have deemed Anthony Rizzo to be not quite ready and are giving LaHair the opportunity. The audition should last at least two months and any success he has — especially considering he’s in the cleanup role — could offer owners a huge bonus in the power categories.

Chone Figgins, 3B, Seattle Mariners (CBS: 23 per cent owned, ESPN: 3 per cent): Figgins is off to a great start in an effort to forget about his disaster in 2011. He’s gone 7-for-17 with two runs scored, four RBI, and a stolen base filling in for the injured Mike Carp in the outfield. Figgins will likely head to third base upon Carp’s return and if he can channel any semblance of the player we saw in his final year in Anaheim, the combination of the speed and roster flexibility will offer value in all formats.

Tommy Milone, SP, Oakland Athletics (CBS: 17 per cent owned, ESPN: 1 per cent): Did we ever mention that we really like Milone? He’s got the third slot nailed down in the A’s rotation and is coming off a stellar 2011 campaign in the minors. Milone experienced an up and down spring, but finished it in style by pitching six perfect innings in his final start against the Sacramento River Cats. He’s heading into a two-start week and should be rostered and starting in all league formats.

Liam Hendriks, SP, Minnesota Twins (CBS: 5 per cent owned, ESPN: unowned): The man from the land down under is a control artist extraordinaire as evidenced by a mere 21 walks in 139 1/3 IP last year on the farm. Scott Baker is currently sidelined dealing with a repeat of last’s season right elbow flexor sprain and could be on the shelf for an extended period. The opportunity is there for the young Aussie to stake claim to a regular job in the Twins’ rotation, making him a solid option in deeper and single league formats.

Drew Smyly, SP, Detroit Tigers (CBS: 12 per cent owned, ESPN: unowned): The 22-year-old — the Tigers’ second rounder in 2010 — won the fifth starter role this spring. In his first season in the minors he moved onwards and upwards quickly finishing the season at Double-A and posting a stellar 2.07 ERA with 130 strikeouts in 126 IP. Doug Fister suffered a left costochondral strain Saturday and was immediately placed on the 15-day DL, likely ensuring that Smyly will get at least four or five opportunities to hold the job and we like those odds.

Lucas Harrell, SP, Houston Astros (CBS: 3 per cent owned, ESPN: unowned): Did anyone see this one coming heading into Spring Training? Harrell carried over his strong spring into his debut Saturday against the Rockies, tossing seven shutout innings of three-hit ball with — amazingly — no walks. The rather high walk rates that he’s demonstrated in the minors are far from a recipe for success, but so far in 2012 he’s kept them in check. When in doubt go with the hand that is currently hot and Harrell qualifies in that regard.

By Tim McLeod
This entry was posted on Sunday, April 8th, 2012 at 2:33 pm and is filed under BASEBALL, The Wire Troll, Tim McLeod. You can follow any responses to this entry through the RSS 2.0 feed. Both comments and pings are currently closed.