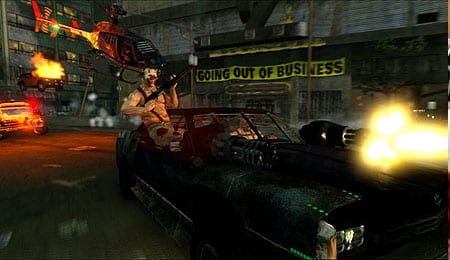 The vehicle combat genre has returned, and it’s still fun to blow up cars real good.

As a senior in high school, I was pretty jealous when one of my close friends got a shiny new Playstation, and that envy only ratcheted up when I saw Twisted Metal for the first time. Vehicular mayhem was always up my alley, from PC classic Deathtrack to Sega Genesis stalwart Road Rash; Twisted Metal took all of the best parts of these games and put them together in awesome mayhem.

The vehicle-combat genre fizzled away over the past generation, but Sony and Eat Sleep Play have rebooted Twisted Metal for the PS3. It’s everything you expected and more — more as in the series now enters the online multiplayer realm.

There’s a lot going on at any one time during Twisted Metal, which means you will use every input option at your disposal. Depending on your control setup (the game offers three configurtions: Classic, Dual Stick, and Racing), you’ll use a different combination of inputs, but the bottom line is that your fingers and thumbs will be busy.

How busy? There’s movement (left/right, acceleration/brake, camera angle), weapons (primary, secondary, primary weapon selection — mapped to the left/right trigger buttons in all configurations), and defensive actions (freeze, shield, turbo boost). The training section is the equivalent of an onscreen manual, so you’ll take probably an hour or two getting used to the controls, more if you decide to switch control schemes midway through. Except for players used to the classic PS1/PS2 control schemes, it’s probably worth it to try all three different control schemes to get a sense of what works best for you.

The bad news is that the controls can be a bit overly complicated at times, particularly because game reactions are so quick. The good news is that they’re all responsive, and movement does correspond to the ratings in the vehicle selection screen, so if you’re finding turning or acceleration to be too rapid or sluggish for your taste, you’ll find an alternative to your liking.

The reboot of Twisted Metal is exactly what you’d expect. Areas are bigger in scope, environments are more detailed, weapons are flashier, and vehicles simply look better. Explosions shake the screen, level-specific elements (weather, lighting, etc.) affect your vision in real time, and missle trails dash by. It’s appropriately chaotic, especially when buildings shatter in front of you, and it’s a greater level of detail than the series has seen before.

That being said, the graphics aren’t particularly groundbreaking for this generation’s hardware. They’re not bad, per se, but you’ll notice things like environment details fill-ins in the distance or some pixelated details as your vehicle gets closer. Most of the time, things are moving too quickly for these things to be noticeable. It’s only when you get to a high point in a level (and a lot of the levels include all sorts of vertical variation) that you can get a sense of this.

The sound is pretty much what you’d expect. Sound effects include guns and explosions, and they’re all over the place — that’s a good thing. There’s a mix of licensed alt-rock songs, including a healthy sampling of White Zombie, and all of it fit the over-the-top theme. The voice work fits the series, as all of the voiceovers come in a gravely, even cadence that makes you think you’re watching a cheesy horror movie.

Speaking of which, there’s also cut scenes to advance the single-player story mode. These are essentially mini, cheesy horror movies filmed with live actors on a blue screen: sadistic, gory, and kind of dumb. If Rob Zombie were ever involved with a video game, it would be Twisted Metal — he could write the soundtrack, direct the cut scenes, and oversee art direction.

The Twisted Metal formula is pretty simple: drive car, shoot other cars, stay alive. That much hasn’t changed. You’ll start by selecting your vehicles — yes, that’s a plural. Rather than play a single vehicle per level, players get to select three vehicles to use per level, all interchangeable by visiting the level’s garage. Each car is ranked for armour, damage, and speed, and features its own unique special weapon.

Single player gameplay is straightforward: survive and kill the other opponents. Weapons and turbo boost icons are scattered around each level, some within buildings that you can discover by smashing through walls. Health is regenerated by either picking up a regenerative icon or by loading into the ramp of a health semi driving around levels. A small HUD map displays your immediate area, along with the general location of the garage and level-specific factors.

Levels themselves come in different shapes, sizes, and gimmicks. You’ll discover hidden underground passages, smash through completely collapsible buildings, maneuver over icy roads, and much more — Eat Sleep Play’s level designers have thrown pretty much every environmental permutation out there, meaning that if you don’t like what one level has to offer, the next one probably will tickle your fancy. That’s referring to the physical design; however, gameplay variables change from level to level. For example, cage matches put up a virtual cage around an area; stay within the cage and you can battle to your heart’s content, but move outside of the cage and you’ll take damage.

Some of these gimmicks are interesting twists that add depth to the gameplay. Others seem more like glorified challenge matches, such as the boss truck that has extra armour and spawns additional opponents at set intervals. At best, these challenges can be, well, challenging, but at worst, they can be frustrating, repetitive, or annoying.

Single player is driven by cheesy storylines involving Sweet Tooth, Mr. Grimm, and Dollface. It’s essentially a short cut scene between levels, and once you beat each series, you’ll want to move on to the multiplayer portion of the game. This is where things get really fun. While single player levels all focus on opponents out to get you, multiplayer offers a variety of modes ranging from team-based battles to free-for-alls. Objectives vary, including Nuke mode (Twisted Metal’s version of Capture The Flag), but they’re all beautifully chaotic and should create a sustained community looking for something different than first-person shooter multiplayer. Twisted Metal also offers local co-op — two-player splitscreen play for campaign levels and four-player splitscreen for deathmatches.

Twisted Metal’s never been about emotions, character, or story. It’s about driving vehicles to blow up everything in site. Mission accomplished, and you’ll be hard-pressed to get anyone who doesn’t have fun with this game. Treat the single-player campaign as an extended tutorial; the real joy comes from the wide range of multiplayer. Twisted Metal has its share of minor flaws, but it fulfills the most important aspect of any game — it’s a hell of a lot of fun. Now, cue up some White Zombie.

By Mike Chen
This entry was posted on Thursday, March 22nd, 2012 at 11:20 am and is filed under Mike Chen, Video Game Reviews. You can follow any responses to this entry through the RSS 2.0 feed. Both comments and pings are currently closed.