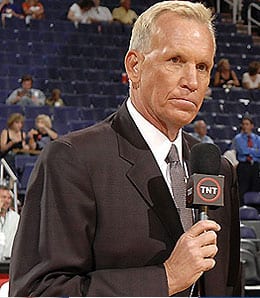 Under Doug Collins, the Sixers are the hottest team in the NBA.

About a week and half ago, I had a question from a reader on Twitter asking me about Elton Brand’s slow start. I preached patience and, thankfully, the big man finally broke out Tuesday, pouring in a season-high 21 points (on scorching 10-of-14 shooting) while adding 10 boards. It’s a damn good thing, too. We were beginning to wonder if Brand was suffering a hangover after being named our 2011 Fantasy Comeback Player of the Year.

Brand, who also threw up three blocks, has not been pulling down as many boards so far this season, so it was definitely nice to see a double-digit effort. Philly has a balanced scoring attack, so I expect his points to fluctuate from night to night, but a consistent rebounding effort would go a long way towards getting those unforgiving Philly fans off his back. The good news is that he reportedly seemed very relaxed on Tuesday.

How about the Sixers, BTW? With their sixth straight win Tuesday, this team is now 7-2 to open up a quick two-game bulge atop the Atlantic Division. Philly is now a perfect 4-0 at home and it’s doing it with improved D and O. The team couldn’t miss Tuesday, canning a season-best 57 per cent from the field, led by a perfect performance from Andre Iguodala. The rub? Limited to 22 minutes (as coach Doug Collins wisely watched his players minutes with the team in the middle of the dreaded back-to-back-to-back) Iggy only put up three shots, the fewest number of shots he’s attempted in a game since November 10, 2006.

Iguodala’s boards and steals are up slightly, but everything else is down. That’s that balanced attack thing again, as we’ve seen Evan Turner take on a much larger role and Spencer Hawes get off to a nice start.

About a week and a half ago, a Jrue Holiday owner was asking me on Twitter what the deal was with him seeming to morph into a shoot-first guard. Holiday took between 10 and 15 shots per game over the first five games of the season, failing to reach even five assists in any of the first four. The thing was, I explained, the kid’s shot was dropping, so he was just going with it. And when he cooled off, the dimes would come. Well, one week ago today, he put it all together, getting his shot off and getting it to drop (8-for-15) while also finding ways to get his teammates involved (eight assists).

Holiday followed that up with nine assists, and after Tuesday’s eight-dime performance (while shooting 8-for-13 for 17 points, with six boards and four steals – what a stud!), he is now averaging 6.6 APG in January after managing less than three per game in December. It’s coincided with slightly less touches, but his shot is still dropping. Even moreso, actually. Holiday has canned 47.5 per cent of his shots in January, and yes, he’s arrived as a top 10 point guard – with room to grow.

The Kings, who were the Sixers’ latest victim, are back to struggling after the good vibes of that first game after Paul Westphal was fired. They’ve dropped to 0-4 on the road, which is bad news because the Philly game was the opener of a five-game trip that will include stops in Toronto, Houston, Dallas and then Minnesota. And you’ve got to love how they first travel cross country to Philadelphia, and then north to Canada, turn around and head south for a two-game tour of Texas and then head way back north again to Minny. There are a couple of winnable games on this trip (Toronto and Minnesota), but Swill acramento have enough gas to bag those Ws given the heinous nature of this trip? Ah yes, the beloved truncated NBA schedule. Good times.

Sacramento came into Tuesday’s game as one of the NBA’s worst outside shooting teams, but the effort against Philly was embarrassing even for the Kings. They canned just 4-of-19 from downtown, while the starting five had a goose egg on eight attempts. John Salmons was the biggest culprit on this night, going 0-for-6 (as part of a 3-for-10 night overall), making him 0-for-17 in the past four games. Are you kidding me? Salmons sunk eight of his first 12 tries from beyond the arc this season, but hasn’t been able to put a pea in the ocean since. He is widely available on the wire, and after Tuesday’s stinker, probably even moreso, but we suggest exercising a bit of patient. Since Keith Smart has taken over, Salmons’ PT is up and his shot will start dropping. If he’s been dumped in your league, we’d recommend a speculative add. Stash Salmons until he heats up and then reap the benefits.

One King that seems to have suffered in terms of PT and touches since Smart arrived is rookie Jimmer Fredette. He was regularly seeing at least 25 MPG under Westphal, but has yet to see that many minutes in any game under Smart. Fredette was jacking up treys like nobody’s business – and doing a decent job of canning them – but he’s only put up two from long distance in each of the last two games, down substantially from his attempts to begin the season. It may be time to cut bait on the rookie, because it’s looking like it’s going to take an injury to Marcus Thornton or Tyreke Evans for him to have real value. If Fredette isn’t jacking up treys, his value goes way down.

By RotoRob
This entry was posted on Wednesday, January 11th, 2012 at 1:45 pm and is filed under BASKETBALL, NBA Today, RotoRob. You can follow any responses to this entry through the RSS 2.0 feed. You can leave a response, or trackback from your own site.