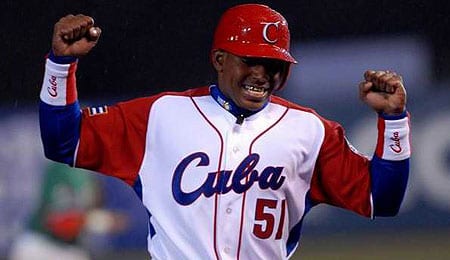 Yoenis Cespedes is pumped that he was featured on RotoRob’s Fantasy Baseball 365 Podcast.

In this week’s episode of RotoRob’s Fantasy Baseball 365 Podcast, Buck, Tim and I were back at it, bantering about baseball like a bunch of old hens clucking… in a good way, that is.

As always, we covered a ridiculous amount of ground in 30 minutes, waxing poetic on a range of topics including:

We laughed, we cried… we talked Fantasy baseball.

See that triangular-shaped thingy below? That’s the play button. You know what to do.

By RotoRob
This entry was posted on Friday, February 10th, 2012 at 1:25 am and is filed under BASEBALL, Buck Davidson, Podcast, RotoRob's Fantasy Baseball 365, Tim McLeod. You can follow any responses to this entry through the RSS 2.0 feed. Both comments and pings are currently closed.