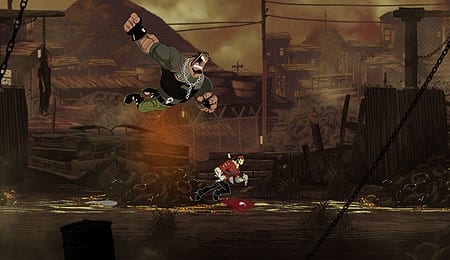 On paper, I should’ve loved Shank. It had a great look, visceral combat and a story that bore an uncanny resemblance to Kill Bill. In practice, though, it didn’t quite click. Enjoyable sections were offset by swarms of enemies with lengthy life bars and cheap bosses that made me wring my hands in frustration. Given the chance to iron out the kinks in a sequel, Klei Entertainment pushes almost all the right buttons with Shank 2 and delivers the game the original wanted to be.

While similar, Shank 2 has made some notable improvements over the first game. Easily the most fun (and perhaps the most useful) is the new counter system, which allows you to execute a counter kill by pressing the right trigger whenever a red exclamation point appears over an enemy’s head. Counters are specific to your foe’s weapon — meaning you’ll see different ones for baseball bats, machetes, pistols, etc. — and make for more diverse and free flowing combat.

Each of the controller’s buttons controls a specific aspect of fight or flight with the right analog stick reserved for evasive rolls (a Godsend). With grapples, pounces, counters, light and heavy melee strikes, and ranged attacks all at your disposal, the ability to unleash some truly hellacious combos become satisfyingly second nature as you progress.

Unfortunately, there are still times when the controls betray you. This usually manifests itself as Shank shooting in the wrong direction or grappling left when he should be countering right. There are also moments when it feels like the dodge happens a hair too late and results in a frustrating hit.

Whatever problems Shank had, the game boasted a very cool looking visual style that churned along at a smooth rate and never skimped on the bloodshed. All that returns in Shank 2 along with a faster pace to the combat and more diversity in the environments. Storytelling still takes place via a series of distinct cinematics that never shy away from gratuitous skin or over-the-top violence. The screen can become overcrowded at times, particularly when there’s lots of fire, but those instances are fairly rare.

Unlike the graphics, the game’s audio never really stands out, posting respectable but uninspiring efforts on both the voice acting and soundtrack fronts. Sound effects are solid, though, and the in-game smacks and screams manage to not get annoying even after many hours.

Tonally, Shank 2 strikes a similar yet still noticeably different chord that its predecessor. Shank is still out to disembowel those that would do harm to his loved ones, but much of the bizarreness that dotted the first installment has been brushed aside (read: no gimps) along with lots of profanity. Even without those elements it still manages to be a dark tale about a violent dictator’s oppression, albeit on a completely superficial level that does little to draw you in.

As is often the case with hack n’ slash games, though, the lack of a compelling tale doesn’t detract from the fun you’re having during gameplay. During its best moments, Shank 2 feels like an exquisitely choreographed fight scene: you grab an enemy, land a few blows, use him a human shield, throw his body to the ground as you deftly vault over an onrushing brute, and then counter a pistol-wielding baddie so that the bullet meant for you takes a detour through his chin instead.

It’s the pursuit of those slick-looking sequences that give you a reason to revisit the bite-sized campaign, which encompasses eight stages and can be completed in a couple of hours. And while it has its tough moments there’s nothing that approached the frustration level of the original — in fact, the hard mode in Shank 2 feels fairly comparable to the default difficulty last time. There a few collectibles to find and medals to earn, but with the co-op campaign completely removed, the game is lean on storyline content and compelling reasons to replay what’s present.

In place of the dicey co-operative experience from the first game, Shank 2 introduces its own version of survival mode where you battle wave after wave of enemies. Each defeated foe drops gold, which is then used to purchase items like healing 40 oz. bottles, decoys to draw enemy attacks away from you, automatic turrets and so on. As you’d expect, the waves of foes get increasingly stronger with the odd curveball thrown in here and there (zombies!).

Although survival mode can be played alone, it’s obviously designed for two players — the announcer speaks as though there is always more than one person even if you’re going solo — and it’s ultimately where the majority of Shank 2’s replay value lies. Survival mode features three maps and 16 characters with different stats (and even a few weapon variants) to change things up a bit. Online performance has been good, but it’s clear even from a limited sample size that teamwork is important here so finding a reliable partner is important to your enjoyment.

Put bluntly, Shank 2 surpasses its predecessor in every conceivable way. The revamped controls and smooth combat make it feel like you’re conducting a symphony of violence rather than button mashing your way through another mundane scrum. Those that felt tantalized by the original should find Klei’s second attempt hits the mark.

By Herija Green
This entry was posted on Friday, February 10th, 2012 at 12:35 am and is filed under Herija Green, Video Game Reviews. You can follow any responses to this entry through the RSS 2.0 feed. Both comments and pings are currently closed.