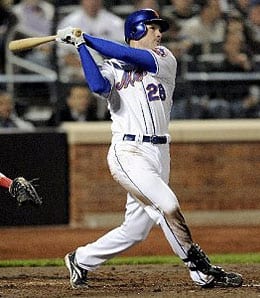 David Murphy can definitely hit, but his fielding needs plenty of work.

We all know Daniel Murphy can hit, as evidenced by his .320 mark before suffering a season-ending torn MCL in early-August. Now, will he hit .320 again? That’s highly doubtful, but there is no doubt that he’s one of the more gifted hitters on the Mets and they desperately need his bat in the lineup.

And here’s where the problem begins.

Murphy is a lousy second baseman, but giving him that job is pretty much the only way they can keep him on the field every game.

So this spring Murphy is going to be spending a lot of time with New York’s new infield coach, Tim Teufel, working on his footwork around the bag – footwork that indirectly led to season-ending injuries in each of the past two seasons.

Justin Turner will also be in the mix for the second base job on the Mets, but the keystone corner is Murphy’s to lose, and if he can just show a modicum of improvement on the field, his bat will carry him to Fantasy prominence.

Over in the NL Central, while many wonder how the Cards will win without Albert Pujols, let’s not forget that they’re getting another pretty important player back this year with the return of starter Adam Wainwright.

Will he immediately reassume his role as the team’s ace? That’s hard to say, because pitchers recovering from Tommy John surgery generally take 12-to-18 months to fully bounce back, so while Wainwright is on schedule to return this spring, how long will it take him to completely recover his velocity, command and feel of his pitches? That remains an unknown, but it’s obvious the Cardinals are bullish on a full and speedy recover, picking up both his 2012 and 2013 options right after the World Series.

This much we do know: you can get Wainwright way cheaper (around the 11th round) this spring than he’s been in years and could be again for a very long time. He’s only 30, reports on his progress have been promising, and he’s a absolute bull at 6’7”, 230, so he should have no problem working his way back to a heavy workload by, say, the second half of the season. If you’re willing to ride out some potential struggles in the first half with command, endurance, etc., you may be handsomely rewarded for your investment.

In keeper leagues, if you can trade for Wainwright now while he’s still below his traditional market value, you will likely be very happy with the move two years from now.

There had been talk a few weeks ago that the Orioles were in the mix for Coco Crisp and that if they had landed him, they would have turned around and dealt Adam Jones. This could be one of those great moves that you never make, because I still believe that a major, major breakout is coming for Jones.

All he did last year was set new personal bests in games, doubles, homers, RBI, steals and slugging. Just 26, Jones will be heading into his power prime years this season, and I can see him ultimately topping out at 35 homers, 20 steals and a .290 BA. This young centre fielder is on the cusp of something special; no wonder Atlanta spent months trying to land him.

This spring will be the last chance you have to draft Jones at a discounted rate.

Don’t forget to join Buck, Tim and I every Thursday at 11 p.m. EST as we analyze all the Fantasy baseball worthy news of the day. This week we’ll break down our Second Base Rankings, which will be released on the site later this week. You can tune in here.

By RotoRob
This entry was posted on Monday, February 6th, 2012 at 1:49 pm and is filed under BASEBALL, MLB Today, RotoRob. You can follow any responses to this entry through the RSS 2.0 feed. You can leave a response, or trackback from your own site.