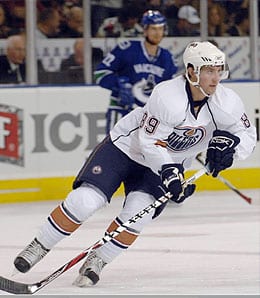 Even before his recent explosion, Sam Gagner has been a useful asset.

The first Fantasy trade deadline came and went Saturday and it spurred major activity. When you see a flurry of trades processed in such a short time, it reminds you of the NHL trade deadline. Deals also lead to a more expansive waiver wire in some ways because inevitably some GMs will make moves that open up opportunities for you.

All we can do here is serve up some players that could be good for Week 17 and even beyond. The goal is that this assistance and the interaction really aids GMs in their quest for Fantasy glory.

Sam Gagner, C, Edmonton Oilers: Gagner is the buzz of the Fantasy hockey world right now with an astounding 11 points in his last two outings. Now some are going to say to sell high and what on Earth are you thinking to place him here? However, Gagner’s overall value at 33 points in 45 games is interesting. Throw out the two big crooked numbers, and he is still a point every other game player. Gagner’s ownership rate will rise from the low double digits to at least 25-to-30 per cent, maybe higher. We suggest you look into him anyways.

Kyle Brodziak, C, Minnesota Wild: With Mikko Koivu still sidelined week-to-week with a shoulder injury, Brodziak really has taken advantage and is definitely available in most leagues — but not for long. He has a respectable 28 points in 51 games, but is on fire with nine points in his last nine games. If the Koivu injury does linger longer than anticipated, Brodziak just becomes that much more Fantasy viable. At this point, we suggest you pick him up regardless of the Koivu situation, because you just never know.

Mikael Samuelsson, RW, Florida Panthers: It often becomes an evil necessity to just take a complete leap of faith at times, and grabbing Samuelsson would be considered a huge one. Why? Think about the injuries, visa issues, and bad luck that has plagued him this season. Samuelsson went from riding the Sedin wave to nearly D.O.A. for Fantasy purposes. Now, with nine points in his last 12 games (including four goals in four games), the right winger has rewarded Fantasy owners very handsomely. With Samuelsson’s increased role expected to continue, he is a sneaky add that is still under the radar for now.

Andy Greene, D, New Jersey Devils: This is one of those moves only needed if you are looking for a few assists to tide you over. Greene has the ability to pass the puck pretty well and is fairly responsible in his own end. His 10 assists in 25 games is a pretty nice total, and he’s logging over 22:00 ATOI. There are worst things you can do than pick up Greene, and his less sub-10 per cent ownership rate is rather attractive considering the helpers he’s piled up.

Mark Stuart, D, Winnipeg Jets: There are times when a guy who is owned in less than 1 per cent of leagues can be very valuable. Stuart is this type of player considering he has 100+ hits and blocks. Those are the only reasons why he has any upside Fantasy wise, but those are two pretty big reasons. Stuart does not log big ice time for a defenseman, but his impact can be felt by opponents he hits and occasionally fights. Even the PIMs are a bit of a bonus, so he is worth a look in very deep leagues.

James Reimer, G, Toronto Maple Leafs: Reimer comes in at just below the 50 per cent threshold in ESPN leagues and about the same in Yahoo!, Fantrax, and others. He’s riding the hot streak right now with two straight shutouts, including a spectacular 49-save blanking of the Ottawa Senators on Saturday. Reimer has an amazing .963 save percentage at even strength over the last little stretch and that is a number that is appealing to the Fantasy masses. Eventually he will take the majority of starts in Toronto and at the very least he is worth a look.

By Chris Wassel
Tags: Andy Greene, James Reimer, Kyle Brodziak, Mark Stuart, Mikael Samuelsson, Sam Gagner
This entry was posted on Sunday, February 5th, 2012 at 1:39 pm and is filed under Chris Wassel, HOCKEY, The Wire Troll. You can follow any responses to this entry through the RSS 2.0 feed. You can leave a response, or trackback from your own site.