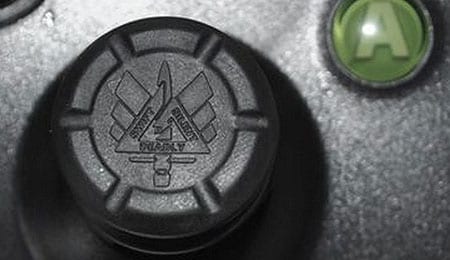 The extended length is surprisingly easy to get used to.

Over the past three-plus years I’ve reviewed more than 200 games, map packs and other assorted downloadable content, but I’ve never ventured into the world of hardware. That changes today as I check out a couple of joystick adapters from KontrolFreek — the FPS Freek Elite and the Hoops Freek — and see if they really make any difference when it comes to gaming performance.

There are a lot of cool perks inherent with being a reviewer of video games — in fact, I’d conservatively estimate the pro-con ratio to be somewhere in the 50-to-1 range. That said; one of those drawbacks is pushing through some major difficulty spikes in order to finish a game on a deadline when you’d rather step away and regroup. The result: controller tossing.

As such, I noticed during some recent rounds of Modern Warfare 3 and Battlefield 3 that my controller was drifting when I tried to stay still and needed constant correction. Given that KontrolFreek boasts of a 40 per cent increase in range of motion and added precision when shooting I was curious if the Freek Elite would correct (or least diminish) the issue.

First of all, the adapters are simple to install and their added length is surprisingly easy to adjust to. In fact, it probably took less than an hour of game time to feel comfortable with the extensions despite having played with the regular Xbox 360 controller since I bought the system in late 2006. Plus, in more than two weeks of play testing they remained securely in place — I also affixed the adapters to the PlayStation 3 controller without issue.

The well-designed grips held up nicely and certainly felt as though they were providing more subtlety to my movements, and despite some rust I racked up some pretty respectable numbers on multiplayer matches in Gears of War 3, Halo: Reach, MW3 and Battlefield 3. Things that require you to click in the analog stick (such as sprinting and melee kills) were as responsive as ever, and that annoying drifting issue I’d been experiencing disappeared entirely.

It’s hard to say definitively that the FPS Freek Elite made me a more lethal killer online — I could’ve just been having some good games or maybe there was even a bit of a placebo effect going on — but I did feel like the controller was more comfortable in my hands and brought additional sensitivity to moving and aiming.

While similar in purpose to the FPS Freek, the Hoops Freek features a convex design with a bumpy ridged feel that resembles a basketball. That all-too-literal interpretation pretty much ensures it’s not as cool looking as its FPS counterpart, but from a technical standpoint it also snapped easily into place and never threatened to come loose from my PS3 controller (though between the two it seemed like the 360 held the adapters in place more securely).

Despite not being marketed for shooters, the Hoops Freek actually holds up very well on that front, particularly with the Dual Shock, as it allows you to manipulate the sticks from various thumb positions on the knobs. Whereas the FPS Freek is designed for you to put your thumbs in the concave grooves, the Hoops Freek ends up providing some much appreciated extra grip for sweaty digits. I didn’t feel there was a lot of additional control, but that could simply be a byproduct of playing so much more Xbox 360 when it comes to shooters.

With games like NBA 2k12 and NBA Jam I had the same general feeling: that although the additional grip was helpful it didn’t feel like it was making a major difference in my ability to pull off the complex moves associated with the 2k series.

While I personally preferred the FSP Freek Elite to the Hoops Freek, I think that at a minimum both add a level of comfort that is missing with the base controllers. The biggest endorsement I can offer is that even though I’m done reviewing them, the KontrolFreeks are staying on.

By Herija Green
This entry was posted on Tuesday, February 7th, 2012 at 12:34 pm and is filed under Herija Green, Video Game Reviews. You can follow any responses to this entry through the RSS 2.0 feed. You can leave a response, or trackback from your own site.