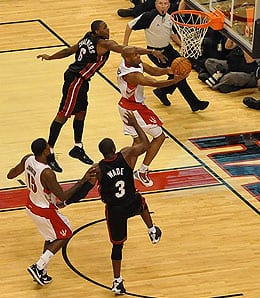 Welcome to Week Nine of The Wire Troll. In the spirit of the season, this week’s edition profiles a few early season Fantasy stars who have been away too long, and have either just returned from injury or are about to make it back onto the floor. If you stuck with them, their return should make your holidays a little brighter, and if their former owners gave up on them, act now – for what better surprise is there than to find a starting point guard under your Christmas tree?

Just as these players make it back, though, another wave of injuries sweeps across the Fantasy landscape. Denver point guard Chauncey Billups is nursing a strained groin, while Raptor Jose Calderon’s sore hip has limited him to only seven minutes total playing time the past seven games. While there’s no clear go-to substitute option for Billups, Calderon’s understudy, Jarrett Jack, has been a popular waiver wire target this week, and we’ll chat about him a bit later.

Perhaps the most serious (and gruesome) injury happened Friday night, when Dallas Maverick power forward Dirk Nowitzi’s elbow collided with the mouth of Houston forward Carl Landry, dislodging three teeth (two of which reportedly ended up in Disco Dirk’s arm), a crash that sidelined both players. Nowitzki’s injury is to his shooting arm, and the fear of infection complicates an already nasty injury. Stay tuned for more updates – especially if you’re in a weekly lineup league.

Landry, meanwhile, whose calm post-collision demeanor defied belief, was either in a total state of shock at the time, or is tougher than Chuck Norris and Cool Hand Luke combined. (“Cool Hand Carl?” Hmmm.) The Rockets’ super-sub may also miss some time, so stay abreast of the latest news.

Erick Dampier, Dallas Mavericks: Dampier’s illness (apparently related to numbness in his arm, which sounds life-threatening scary, but his reaction was nonchalant — “I just had a little numbness in my arm,” he said) appears to be behind him, and the beefy centre is once again snaggin’ boards and swattin’ shots. He has averaged 9.4 points, 10.4 rebounds and 2.3 blocks per game in nine December starts, but is available in more than half of all Yahoo! leagues. Dampier is entrenched as the team’s starter, and is a worthy waiver wire pick-up if you’re in need of boards and blocks.

Marreese Speights, Philadelphia 76ers: The super-sub and early-season waiver wire darling made his return to the floor Wednesday, scoring 14 points in 22 minutes off the bench. He was even better the following game, throwing in 17 points and grabbing 10 boards – again in 22 minutes. Saturday, he went off for 28 points and nine boards. Speights should be in line for around 25 or more minutes, 12-15 points and 6-8 rebounds a night for the foreseeable future.

Omri Casspi, Sacramento Kings: The move of Jason Thompson to centre (keep an eye out for his eligibility to change) and Spencer Hawes to the bench has opened the door for Casspi, and the young Israeli has stepped up in a big way. In his first two games as a starter, the rookie averaged 21.5 points, 4.0 rebounds, 2.0 assists, 1.5 treys and 1.5 steals. Time will tell whether he can maintain that pace, but for now Casspi is definitely worth picking up if your league has 12 or more teams. Beware of his awful free throw shooting, and be ready to move on if he loses his starting gig – but Casspi’s skill set can be of definite value to just about every Fantasy team as long as he’s seeing a lot of floor time.

Ersan Ilyasova, Milwaukee Bucks: We have profiled Ilyasova twice before on The Troll, but his Yahoo! ownership is still a lackluster fifty-something per cent. (Hell, RotoRob himself dropped him a while back — a move he regrets tremendously.) Ilyasova is currently on a hot streak, averaging 14.3 points, 6.9 boards, 1.6 treys and 1.3 steals through his first eight games in December. By contrast, Shawn Marion of Dallas is averaging 11.1/6.9/0.0/1.0 this month – and his 1.4 blocks do not justify the huge 40 per cent ownership disparity between he and Ilyasova. The Bucks’ youngster should be owned in most leagues at this point, but the longer he keeps putting up numbers the less chance you’ll have to get him…so what are you waiting for?

Jarrett Jack, Toronto Raptors: With Calderon sidelined by a sore hip – and his status still in question – Jack is a must-own in all Fantasy leagues. Since taking over as the starter December 8, Jack has averaged 12 points, 3.7 rebounds, 5.9 dimes and 1.3 steals per outing – and it’s telling to consider that Calderon’s line was only 12.1/2.3/6.4/0.8 during his 22 games as the starting point guard.

Lou Williams, Philadelphia 76ers: The Sixers’ wunderkind point guard has been telling anyone who would listen that he would be back sooner than predicted, and those forecasts look to be coming true. He returned Saturday, and reportedly lost only two pounds while his broken jaw was wired shut. Williams averaged 17.4 points, 5.1 assists and 1.3 treys before getting hurt and is available in about half of Yahoo! leagues, so now’s the time to bargain shop. As an aside, what’s going to happen when Allen Iverson and Williams are both healthy? Could be a tumultuous holiday season in the City of Brotherly Love.

Jerryd Bayless, Portland Trail Blazers: The second-year guard exploded for a career-high 29 points on Thursday, while logging more than 24 minutes for the second straight night. The crowded Blazer backcourt may hold down Bayless’ minutes in the short term, but his value would jump several notches if Portland decides to move Andre Miller (as has been rumoured for some time). Bayless is worth grabbing as a speculative pick in deeper leagues, but stay your hand in standard formats until we see whether or not his recent spike in playing time is an illusion. If Miller is indeed dealt, don’t wait for us to tell you to do it – snap up Bayless ASAP if he’s still out there.

Jameer Nelson, Orlando Magic: Nelson, who underwent knee surgery in mid-November, is slated to return to the lineup sometime this week. Not many of his owners have cut bait, but Nelson is available in about 25 per cent of Yahoo! leagues. Have a glance at your league waiver wire between sips — okay, gulps — of egg-nog and make sure he isn’t available. The diminutive point guard was averaging 13.7 points, 5.5 assists and 1.5 treys before he went down.

From all of us here at The Wire Troll, a very Merry Christmas, happy Boxing Day and joyous Holiday season to you and yours. Whichever holiday or holidays you celebrate at this wonderful time of year, we wish you glad tidings and a safe and happy season and victory with your Fantasy teams!

By Buck Davidson
This entry was posted on Sunday, December 20th, 2009 at 2:25 pm and is filed under BASKETBALL, Buck Davidson, The Wire Troll. You can follow any responses to this entry through the RSS 2.0 feed. You can leave a response, or trackback from your own site.