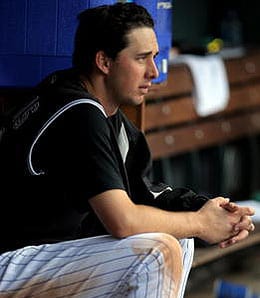 The Reds beefed up their rotation depth with the addition of Jeff Francis.

The Cincinnati Reds clearly needed pitching help, and this offseason they’ve done everything they could to address that, dealing for Mat Latos and Sean Marshall, signing Ryan Madson and now taking a flier on Canadian southpaw Jeff Francis.

A few weeks ago, it looked like the Rockies would make an attempt to return Francis to his original team, but they have since added plenty of pitching options elsewhere, leaving the former 17-game winner in the unemployment line. As recently as last week, the Mets were said to be interested in Francis, while Seattle and Toronto were also reportedly sniffing around.

Francis wasn’t completely awful last season – he did manage to stay healthy and show modest improvement – yet he had to settle for a minor league deal from Cincy. It’s a bit surprising he couldn’t get a major league deal because it seems as if various rumours had him connected to so many different teams.

While Francis is no longer the workhorse he was prior to getting hurt and missing the entire 2009 season, he was able to stay in his starts longer last year while pitching for the Royals. Free of Coors Field, less of the flyballs he served up left the park, but now that he’s pitching out of the Great American Ballpark, that trend is sure to reverse itself.

Francis actually deserved a better fate last year (his FIP was 4.10 vs. 4.82 actual ERA), but with the expected increase in home runs, he’ll be a weak Fantasy option in anything except extremely deep NL-only leagues, especially given his putrid strikeout rate, which will be modestly helped by the move back to the Senior Circuit.

With this move, the Reds now have much more rotation depth, with holdovers Bronson Arroyo, Homer Bailey, Johnny Cueto and Mike Leake teaming with newcomers Latos and Francis. And don’t forget that Aroldis Chapman is going to be given a chance to start as well. Adding Francis is a nice, low-cost, low-risk move for the Reds. But doing the same for your Fantasy team? Err, not so much.

While we’re discussing middling veteran starters that can’t throw the ball by hitters, how about Carl Pavano? Once the centrepiece of the package the Expos got from Boston for Pedro Martinez, Pavano has been named as Minnesota’s Opening Day starter – already! Hey Ron Gardenhire, you know it’s only late-January, right?

Now 36, Pavano failed to reach double digits in wins last year for the first time since his all-time great bust of a deal with the Yankees expired. His ERA last year rose significantly from his very fine rebound effort in 2010, but he continued to get by on his superb control.

The Twinkies are coming off a season in which they narrowly missed reaching 100 losses and their answer? Why none other than to strike fear in their opponents by trotting Pavano out to the bump to kick off the 2012 season.

Considering the Twins only invested $16.5-million for two years of Pavano’s time when they re-signed him prior to 2011, they are getting decent value for their money so far – unless he completely tanks this season. But compared to what the Yanks threw at him (just shy of $40 million over four years), this has been an awesome return on investment. Consider that in four years as a Yankee, he combined to deliver -0.1 WAR; in two and a half seasons as a Twin, Pavano has put up a combined 6.3 WAR.

To round out our troika of soft-tossing veteran starters, the last time we checked in on Brad Penny in mid-May, he was actually getting it done for the Tigers, making him a decent waiver wire option. He continued to defy the odds that month, going 3-1 with a 3.24 ERA, but had just 10 strikeouts in 33 1/3 IP.

Okay, so picking Penny wasn’t our finest hour, but at least you got a couple of decent weeks out of him before he imploded.

A free agent this offseason, it’s highly unlikely that Penny will be returning to Detroit after his ugly 5.30 ERA. He was arguably one of the worst starters in the AL last season and unless the Tigers maul themselves silly and opt to bring him back, Penny is going to be very hard-pressed to find work this winter. He’ll be 34 in May, and if Francis had to go the minor league deal route, you can bet your booty Penny will have to follow suit.

Join us tonight (Thursday) at 11 p.m. EST for another episode of RotoRob’s Fantasy Baseball 365 Podcast. This week, Buck, Tim and I will talk about Carlos Pena’s return to Tampa Bay and dissect Detroit’s huge (literally and figuratively) signing of Prince Fielder. Tune in here.

We’d like to take this opportunity to all our readers that voted for us in the Best Sports Blog in Canada competition. While our quest fell a tad short, we did finish second, and hey, a silver is sweeter than a bronze, right? We’ll get ‘em next year. Congrats to winner Rod Peterson (who sure has a hell of a lot of ads on his site… in fact, I had to search for his logo through the stacked banner ads) and third-place finisher Straight From the Arse.

By RotoRob
This entry was posted on Thursday, January 26th, 2012 at 3:28 pm and is filed under BASEBALL, MLB Today, RotoRob. You can follow any responses to this entry through the RSS 2.0 feed. You can skip to the end and leave a response. Pinging is currently not allowed.