The Wire Troll: Mike Minor Ready for Another Shot 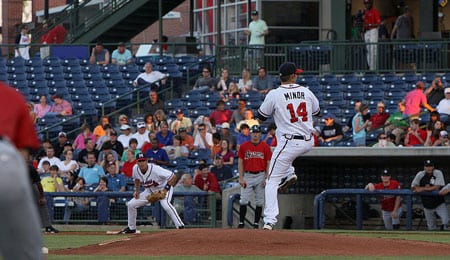 Mike Minor’s time may have finally come, so pick him up now.

Tim is off this week, as he’s currently south of the border shopping for purses with his wife (no seriously… hey, I can’t make this shit up), so the Wire Troll duties fall to yours truly. Assuming he doesn’t get so dazzled by the Coach outlet store that he decides to invest in a transgender procedure, Tim will be back in this space next Sunday.

And now for our waiver wire recommendations of the week:

Mike Minor, SP, Atlanta Braves: Most pundits were taken aback when Brandon Beachy won the Braves’ fifth starter job from favourite Mike Minor, but Beachy’s impressive start vindicated Atlanta’s faith. However, Beachy had to leave his outing Friday early and has landed on the DL with an oblique injury. The Braves will need a spot starter to take the hill Wednesday in place of Beachy and Minor is the likeliest of candidates to get the call (although Rodrigo Lopez and Julio Teheran are also being considered). When Minor was farmed out to start the season instead of pouting he proceeded to dominate at Triple-A, giving up just one or two earned runs in all six of his starts. A spot start in Atlanta didn’t go well, but Minor is quite capable of generating solid value, so don’t be afraid to take a look at him as a streaming option if he gets another chance. It’s worth noting, however, that after Wednesday the Braves won’t need their fifth starter again until May 31. Still, we ranked Minor 106th among starters in the preseason, so we’re bullish on his chances of making an impact if he gets some run.

Michael Brantley, OF, Cleveland Indians: Like most of his teammates, Brantley was a disappointment last season. However, the sophomore is quietly putting together a solid season for the Tribe. So why isn’t he getting the Fantasy love? His batting eye has been off the charts, he’s pitching in with a few steals and he’s batting almost .300. Brantley is certainly exceeding our expectations (we had him ranked in the top 90, but he’s probably playing at a top 40 level). He’s never been much of a long-ball threat, but Brantley has suddenly gone yard twice in the last four games. He deserves to be owned in all AL-only formats and in deeper mixed leagues.

Jamey Wright, RP, Seattle Mariners: Brandon League was looking fine as the early-season replacement for David Aardsma, but with losses in each of his last four appearances – including three straight blown saves – it’s become clear that the Mariners need to switch it up. The ironic part is that League imploded just about the time it was announced that Aardsma’s recovery took a downward turn because of new elbow problems. But the question is who now gets the call for saves in Seattle? Josh Lueke is considered to be a potential closer, but he was lit up and farmed out last month. David Pauley and Aaron Laffey have each pitched very well, but neither has closing experience. And then there’s veteran Jamey Wright. When he first became a full-time reliever, he caught our eye, but he’s never been the man, so he’s gained precious little prominence. However, Wright has been lights out as the M’s top set-up man, so look for him to get his chance to close. Yes, it’s an ugly situation, but if you need saves, you may as well take a flier on Wright.

Jesus Montero, C, New York Yankees: All is not well in the Bronx these days, and the latest drama centres around struggling Jorge Posada’s demotion to ninth in the batting order and subsequent refusal to play on Saturday. Oh sure, he said his back was hurting, but we suspect it was more a case of a bruised ego. Going forward, Posada could be released or he could choose to retire… no one really knows how this ugly situation will play out. But one thing’s certain: Montero is raking (.336 through 29 games) at Triple-A, and he needs to be stashed immediately. The youngster’s strike zone judgment leaves something to be desired, but it was much better last year, so there’s hope for improvement. Montero could easily take over Posada’s DH spot and would likely see enough action behind the plate to qualify, and that will make him valuable. Get a jump on your league now and add our No. 6 prospect before it’s too late.

Laynce Nix, OF, Washington Nationals: It was about this time last year that Nix emerged with some value, and it looks like history is repeating. Very quietly, he is enjoying a career year for the Nats. Nix has hit safely in six straight games, including two three-hit efforts and one two-hit game. During this stretch, he’s spanked two homers, driven in six runs and stolen one bag. Despite getting two hits Saturday, he had run scoring (at least one in four straight) and doubles (at least one in three straight) streaks snapped. With five homers in just 80 at-bats, Nix is displaying a level of power we’ve never seen out of him. He won’t take a walk to save his life, but there’s nothing wrong with his .313 BA and it sure looks like Nix has wrestled the everyday left field job away from the more highly-touted Michael Morse, so feel free to add him in NL-only leagues and put him on your radar in deeper mixed formats.

Endy Chavez, OF, Texas Rangers: Julio Borbon has landed on the DL with hammy woes, so Texas summoned Chavez from Triple-A. Remember him? It’s been nearly three years since we last checked in on Chavez and much of the time since has been spent rehabbing from a torn ACL and MCL and microfracture surgery in 2009. But suddenly Chavez found himself batting atop the powerful Rangers’ lineup on Saturday and, while he failed to impress in his debut (0-for-4 with a strikeout), Chavez was looking pretty good in the minors (.305 with two homers, 16 runs, 17 RBI and six steals in 30 games). If you need a boost in the stolen base department, Chavez is an intriguing short-term addition.

By RotoRob
This entry was posted on Sunday, May 15th, 2011 at 11:12 am and is filed under BASEBALL, RotoRob, The Wire Troll. You can follow any responses to this entry through the RSS 2.0 feed. You can leave a response, or trackback from your own site.