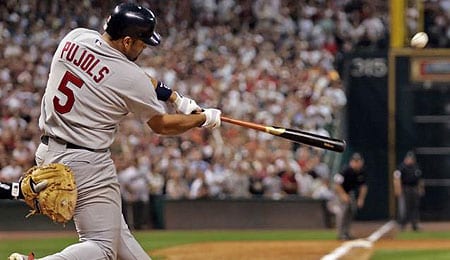 How will the move to LA affect Albert Pujols and the rest of the Angels?

Yes, we know you’ve been waiting with baited breath since RotoRob.com launched five and a half years ago for the site to finally begin hosting its own Podcasts. Well, now that your face has a nice blueish hue to it, let no one say we are procrastinators, as on Thursday night, we debuted RotoRob’s Fantasy Baseball 365. Our new Podcast, which can be heard on Blogtalkradio Thursdays at 6:30 p.m. EST, features Buck Davidson, Tim McLeod and RotoRob bantering about all things Fantasy baseball.

On our maiden voyage, we put our spin on many of the key free agent signings so far this winter, including:

The lively discussion, which can heard by pressing play below, was all over the map — literally — as we discovered that Tim does not live anywhere near “Southern Ontario.” Unless, that is, you consider a 24-hour drive “nearby.”

By RotoRob
This entry was posted on Friday, January 6th, 2012 at 3:15 pm and is filed under BASEBALL, Buck Davidson, Podcast, RotoRob, RotoRob's Fantasy Baseball 365, Tim McLeod. You can follow any responses to this entry through the RSS 2.0 feed. You can leave a response, or trackback from your own site.