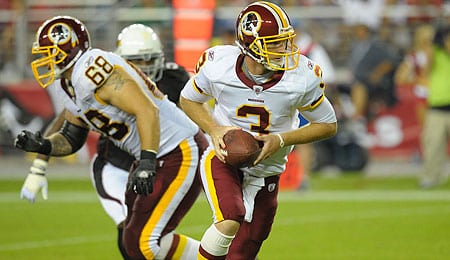 Welcome to the Week Eight edition of the Wire Troll. The NFL season is nearing the halfway point, and as usual, it has been filled with surprises. Who would have reckoned that the Lions would be 5-2 at this point (despite a two-game losing skid!) or that the Bills would be 4-2 and the Eagles 2-4?  Did you have your money on Steve Smith being the league’s top receiver after seven weeks of play? Join the crowd.

John Beck, Washington Redskins: The 30-year-old accorded himself fairly well in his fifth career start Sunday, completing 22 of 37 passes for 279 yards and one touchdown. He added a rushing touchdown as well, thus completing what turned out to be a reasonably good Fantasy effort. In Week Eight, Beck will face a Buffalo defense that is rated 30th against the pass, so he makes a decent speculative play in either very deep or two-quarterback Fantasy leagues.

Ryan Torain and Roy Helu, Washington Redskins: The ‘Skins lost Tim Hightower to a season-ending knee injury Sunday, a development that has prompted a return to the Wire Troll for Torain. The third-year man, who looked to be a budding star after dashing for 135 yards in Week Four, has been all but invisible the past two games (thanks, Shanny) but should see a huge workload now that Hightower is out of the picture. Helu figures to be the third-down back, and he is a decent choice in PPR formats if Torain is not available.

Knowshon Moreno, Denver Broncos: Yes, someone besides Tim Tebow does play for the Denver Broncos. Moreno figures to be the top rushing option while Willis McGahee is on the mend from surgery to repair his fractured right hand. Willie Mac will miss at least one week and almost certainly two, so Moreno should see a heavy workload in the short term. Lance Ball will also be in the mix, but it’s hard to imagine him significantly affecting Moreno’s Fantasy value. Don’t look for Moreno to carry you through the rest of the season, but he should provide a short-term boost to help your team make it through the bye weeks.

Early Doucet, Arizona Cardinals: The Cards figure to be throwing early and often now that Beanie Wells will be sidelined for at least a week and probably more. Top wideout Larry Fitzgerald draws more attention than watering day at Hope Solo’s house, so Doucet should have plenty of opportunities to show his stuff as he works the underneath routes. The fourth-year pro has already established new career highs in receiving yards and touchdown catches, and he’s on pace for something in the neighborhood of 70 catches and 900 yards this season. He’ll face the tough Baltimore defense this week, but Doucet’s play of late should still earn him consideration as a flex play in deeper Fantasy formats.

Jabar Gaffney, Washington Redskins: No. 1 wideout Santana Moss will be out for 5-to-7 weeks with a fractured hand, so Gaffney elevates to the top of the depth chart. The 30-year-old veteran is on pace for close to 1,000 receiving yards this season, but he has never been much of a scorer. He probably won’t be the top target in D.C — that honour goes to tight end Fred Davis — but Gaffney should still rack up enough yardage to make him a serviceable flex play in deeper leagues.

Jake Ballard, New York Giants: The rookie from Ohio State University has quietly amassed a line of 8-153-1 over his past two games, and he returns from the Giants’ bye week as an integral part of their aerial attack.  Ballard was not highly regarded coming out of college, having posted just 34 receptions in 48 outings during his career, but the hulking youngster has shown that he’s much more than just a blocker. Can he keep it up now that opposing defenses are ready for him? It’s worth a waiver-wire dice roll in deeper leagues to find out.

Dan Carpenter, Miami Dolphins: Carpenter endured a shaky start to his season, but he has rebounded nicely — knocking home 11 of his 12 field goal tries over the past four games. The Miami offense is and should remain woeful; Carpenter has managed just six extra points against 14 three-pointers this year. As long as the Dolphins are able to propel the pigskin into Carpenter’s range, though, his Fantasy owners should remain happy.

Terrence McGee, CB, Buffalo Bills: There was once a time when McGee was one of the first IDPs to come off the draft board — especially in leagues that rewarded return yardage. Those days are long gone, but the injury-plagued defender racked up 11 total tackles in Week Six, and he looks to be healthy for the first time since injuring his hamstring in Week One. Hee doesn’t return kicks any more, but if your regular DB is on a bye week, have a look at McGee — and add him immediately if your league requires you to start cornerbacks.

NaVorro Bowman, LB, San Francisco 49ers: Patrick Willis gets all the press, but Bowman’s 56 tackles leads San Francisco by a significant margin. Bowman has yet to produce a sack or force a turnover, but his nose for the football should produce his share of big plays soon enough. If your league rewards tackles and assists, he makes a fine add in just about every format.