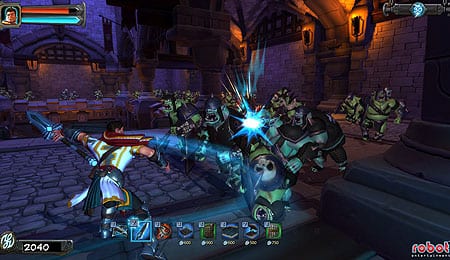 The only good orc is a dead orc.

If there’s one thing in this world I hate it’s orcs. They’re always smashing stuff with their oafishness and pooping inappropriately (totally impossible to house train). As it turns out, I’m not alone in my hatred of these foul creatures.  Developer Robot Entertainment is firmly onboard the “orcs suck” train as well, and as such it’s releasing the definitive orc-killing experience, Orcs Must Die!, on Xbox Live Arcade.

There’s a lot going on in Orcs Must Die!, which puts a premium on tight controls to make the necessary multi-tasking little more than second nature. I’m happy to report it’s handled very well: the bumpers cycle through your available weapons and traps (you select your loadout by pushing down on the d-pad) while the right trigger either sets a trap or attacks directly.

When setting traps you just highlight what you want to deploy and aim at a surface. If you’re able to place it there it’ll appear green and give you a red beam that shows its effective range. Each weapon also has an alternative fire mode that is executed by pressing the left trigger — these usually employ area effects but also drain your mana meter. Face buttons handle tasks like jumping and sprinting as well as selling unwanted traps.

My only two issues with the controls are minor ones. First, jumping has a weird floaty feeling that can make it easy to accidentally fall off surfaces. Second, aiming your crossbow or magical projectiles at aerial targets doesn’t seem crisp or accurate enough. This is particularly noticeable when you start encountering the smaller flying foes.

There is a cartoony style at work here that plays well into the tongue-in-cheek vibe that permeates the game. Despite that, enemies still look menacing, and the various units are all easily distinguishable from one another (an important thing in a strategy game). Traps and spell effects also look good. There isn’t much environmental variety, but if plain looking settings is the price we have to pay to keep the game churning along smoothly as dozens of orcs fill the screen, it’s a worthwhile tradeoff.

Although Orcs Must Die! features a swelling score that conveys the frenetic pace and desperate odds you’re facing, it does become repetitive the further you progress. The limited voice acting fits with the rest of the presentation.

Orcs Must Die! is the same type of hybrid tower defense/action title as games like Trenched and Toy Soldiers: Cold War. You control a nameless War Mage, whose purpose is to defend the rifts that connect the orc’s realm to other worlds. Although you’re portrayed as a bit of a boob, is it fallen to you to hold the line against wave upon wave of orcs.

Each stage has the same basic setup. There are a certain number of enemy breach points and accessible rifts that you must defend simultaneously. Potential orc routes are then traced out with ghostly blue lines, indicating which pathways you’ll need to defend.

Your first step is to open up your spellbook and decide on your allotment of weapons and traps to take into battle. Each stage you pass unlocks a new item for your use. However, you’ve got a finite number of slots available so you’ll need to decide what you want with you before the invasion begins. Walking the levels and establishing how best to defend your rifts is essential to success.

Orcs Must Die! does a fantastic job of forcing you to embrace both halves of the gameplay. There’s literally no way to lay out enough traps to stop every orc, and conversely you cannot forego traps entirely and rely on your hack n’ slash techniques to muscle through. Eventually you’ll be able to upgrade traps and unlock the use of weavers, who can supplement your physical abilities, but even then you’ve got to be both strategic in deploying your traps and precise on the attack.

There are an impressive number of traps at your disposal. Some of my favourites include the arrow wall (mows down orcs that pass through it), spike trap (damages and slows enemy advancement) and launcher (shoots orcs haplessly through the air and hopefully into a waiting abyss). Plus, in addition to your standard sword and crossbow, you’ll also gain access to various elemental magic. By the time you reach the end of the game you’ll have amassed quite an arsenal.

That’s good because the game doesn’t skimp on the orcs… or trolls… or kobolds… or gnoll hunters. They just keep pouring out of the breach points and relentlessly attacking. Each one you kill earns you coins, which can then be used to beef up your defenses. Some of this you’ll be required to do on the fly in the 10-to-15 seconds between waves, but the game does cut you a break by giving you time to regroup after every third wave as enemies won’t begin their onslaught again until you trigger them manually.

Each wave is united in its purpose: get to the rift. Some, like orcs, will attack you along the way, while others (kobolds) do nothing but sprint for the world’s exit. The exception is the gnoll hunter, which is there not to reach the portal but rather to kill you. Your rift functions identically to the toy box in Toy Soldiers as you have a counter, and if it reaches zero it is game over.

All told there are 24 stages to complete across three difficulty levels, one of which (Nightmare) can only be unlocked by beating the game on the default War Mage setting. You also earn skulls based on your performance, and it’s quite a challenge to earn the five-skull rating on each level. To do that you’ll need to not only finish under the par time but also prevent even a single enemy from reaching the rift.

It’s in the pursuit of skulls, high scores and tougher difficulty settings that Orcs Must Die! finds its replay value. Items unlocked on later stages can be used to replay earlier ones, which help considerably when trying to earn the higher ratings. However, there is no multiplayer component and your online interaction is restricted to leaderboard standings only.

Also, found amid otherwise excellent gameplay is the cheapness of ogre attacks. These lumbering brutes have the ability to stun you with a single hit, which is fine. What isn’t fine, however, is that if you ever encounter more than one at a time and take a single blow you’re dead. They’ll alternate disabling you until your health runs out. The game does feature respawning, but at a cost of five rift points. It’s incredibly frustrating and easily the thing I disliked the most.

Challenging, fast-paced and utterly satisfying, Orcs Must Die! is simply a blast to play. It’s absolutely worth downloading immediately and is one of the best Xbox Live Arcade games this year.

By Herija Green
This entry was posted on Thursday, October 6th, 2011 at 9:44 am and is filed under Herija Green, Video Game Reviews. You can follow any responses to this entry through the RSS 2.0 feed. You can skip to the end and leave a response. Pinging is currently not allowed.