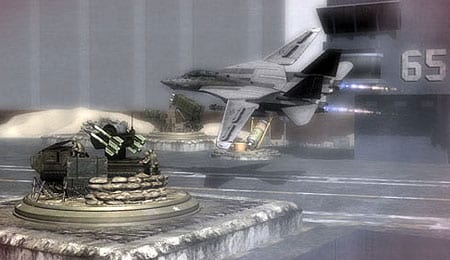 Every time you go up in the air, you’re unsafe.

Another Summer of Arcade comes to a close this week with the release of Signal Studios’ Toy Soldiers: Cold War. The action-heavy tower defense/shooter hybrid keeps many of the trappings of the original while moving the backdrop into a more familiar setting: the 1980s. But does it send the Summer of Arcade out with a bang, or a whimper?

As a game with several distinctly different elements — creating/upgrading emplacements, manning turrets and operating vehicles — Cold War does a yeoman’s job of rolling it all together in a responsive and cohesive package. Moving the cursor around the battlefield and accessing the radial wheel with the right trigger works smoothly, and I never once built a unit I didn’t intend to during all my hours. The addition of “quick commands” via the d-pad is nice, allowing you to assume control of, upgrade, repair or sell a unit with a single input.

Working the turrets is solid, though a manual reload function is strangely absent. Vehicular setups have been smoothed out considerably from the original, and I rarely felt like I was fighting to get the various tanks and choppers to do what I wanted. There are still some limitations with the camera, though, which leave aspects of the map obscured even from an overhead perspective. It’s a frustrating issue, especially when you’re trying to set up defenses and suddenly run into an invisible wall that halts your scanning.

Strides have clearly been made since the original came out in early 2010, and the overall visual style still rates among the more enjoyable on Xbox Live Arcade. All of the units retain a cool mix of appearing realistic and still clearly being a toy — whether that’s due to a visible antennae to receive remote control signals or old fashioned wind ups. The scenery is also much more vibrant and appealing this time around with plenty of historic landmarks on display.

An 80s-esque soundtrack sets the tone for much of the raucous fun you’ll be having, but in a war game that plays second fiddle (or electric guitar in this case) to the sound effects. And in that department Cold War has done an excellent job of delivering hard hitting explosions and thundering gunfire. It really immerses you in the intensity of fending off dozens of units as they bear down on your toy box. There’s also some occasional voice work, which is played for laughs.

For anyone that didn’t play the original, Toy Soldiers blended strategic elements found in tower defense games with third-person shooting. That combination made for some frenetic gameplay as you had to balance the construction, upgrading and repair of your defensive units with manning the battlements yourself and operating a selection of vehicles.

Cold War brings that back wholesale, but there have been several notable refinements. Perhaps the most important of which is the new auto-save function. It records your progress after each wave and allows you to rewind to any previous point if things go south — those that spent 20-plus minutes on a level in the original only to be defeated and forced to start from scratch because they were caught unawares should really appreciate this. To that end, however, the game seems much more forgiving than the original, which could be punishingly tough even on the Normal setting.

In addition to the rewind feature, Cold War has also included a larger assortment of vehicles you can control, including tanks, helicopters and fighter jets. Each of these drivable units is now battery powered, meaning you’ll need to either collect batteries scattered about the map or return to the recharging station once you run low on power.

Another new feature is that score multipliers are rewarded with single-use “barrages.” These special units (like the Rambo-inspired Commando or an artillery strike) are extremely powerful and can turn the tide of battle when used properly.

Where Cold War fails to match its predecessor is in the amount of content. Whereas the original featured a full allied campaign as well as a campaign-plus that put you in control of German forces, this has only a single 11-mission story mode. And since you won’t need to replay entire missions thanks to the rewind you can comfortably blow through the single-player mode in four or five hours.

Of course, there’s more to do here than just the campaign. The game also boasts an improved Survival mode and a head-to-head multiplayer available locally (split-screen) and online. For those that would rather team up there’s a co-op feature available for both Survival and campaign missions. It’s a surprising amount of fun to have a second person along for the ride, particularly on the higher difficulty settings like Elite, where the turrets won’t fire themselves. Lastly, a series of quick-hitting mini games have also been added.

While many significant improvements have been made compared to the original, Toy Soldiers: Cold War is a leaner offering in terms of content. There’s still enough to keep you occupied for a while, though, and what’s there is so fun that it remains a solid value.

By Herija Green
This entry was posted on Tuesday, August 16th, 2011 at 7:57 am and is filed under Herija Green, Video Game Reviews. You can follow any responses to this entry through the RSS 2.0 feed. You can leave a response, or trackback from your own site.