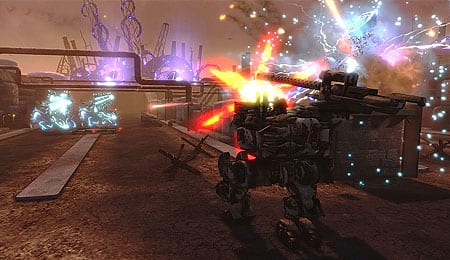 It’s not easy to cull inspiration from multiple sources and then bring them together to form something that still feels wholly original. And yet, Double Fine makes that delicate undertaking look easy with Trenched, a hybrid third-person mech shooter/tower defense game that evokes memories of titles like MechWarrior and Toy Soldiers while successfully carving out its own niche.

There’s a lot going on in Trenched so it was important that Double Fine kept things streamlined and intuitive. For the most part, it succeeds. Your mech is controlled with the analog sticks, which can be moved independent of one another — in other words, you can run one direction and fire in the opposite one. The left and right triggers fire the weapons mounted on their respective sides while “X” reloads both guns. Pressing “A” will activate your leg ability (i.e., sprinting, fast reload).

Beyond your weapons, you can also deploy a series of entrenchments to help you in battle. Depending on your loadout you’ll have access to as many as four different turrets, each mapped to a separate direction on the d-pad. Once you’ve selected the one you want the left bumper brings up a crosshair to choose where you’d like it dropped. The right bumper turns on a magnet to gather scrap.

My only significant gripe is that at times the game loses track of where you’re aiming. This occurs when your torso and legs are pointed in opposite directions, and even though you’ll have an enemy in your sights you’ll send a grenade bouncing helplessly in another direction.

Trenched has a very unique aesthetic, blending futuristic-looking technology within a plausible post-WWI setting. That combination makes for strange bedfellows, but Double Fine brings it together seamlessly. The Monovisions are particularly well designed with an appearance that mixes massive organic creatures with electrically charged technology — the most notable feature being the integration of old-fashioned tube television sets. Add some highly customizable mechs and powerful explosions to the innovative Monovisions and you’ve got one fantastic looking game.

Things hold up well on the audio front, highlighted by the solid voice acting of the main characters, Frank Woodruff and Vladimir Farnsworth. Their interplay is well written and entertaining, and it does a nice job of keeping their conflict front and centre. There does tend to be a lot of repetition in the lines spoken by the mech pilots, however, which can get annoying… for now (get the game and you’ll get that joke). Weapon sound effects, explosions and the screams of the Monovisions are great.

Like the melding of styles itself, the plot in Trenched is an interesting one. The game tells a story of two World War I soldiers who lost their legs in combat being exposed to a mysterious broadcast that killed everyone exposed to it, except them. Instead of dying, the men are imbued with technological knowledge far beyond than anything seen before.

With this gift Woodruff creates a series of mechs known as “Trenches,” while Vlad uses his knowledge to conquer the world. To do this he creates a network of cables and conduits throughout the world, allowing him to dispatch his insidious Monovisions (derisively called “tubes”) anywhere to spread the broadcast. It’s a solid setup of the old “friends turned rivals” motif, though there’s not much story development after the groundwork is laid.

As noted, Trenched combines tower defense and third-person shooting as your Trench must defend one or more tactical points per level. Each mission begins with a briefing from Woodruff, after which you’ll select your loadout. The game offers several different mech variants, but ultimately you’ll be picking between three types: assault, engineering and standard.

Assault chassis allow for more (and bigger) weapons, and are ideal for gamers that want to concentrate on the shooting aspects. Engineering setups offer a more tactical approach with just a couple weapon slots but a much larger selection of emplacements. Standard chassis strike a balance between the two. These choices dramatically affect how levels play out and do provide a fair amount of incentive to return later and try alternate approaches.

Once you hit the battlefield, Trenched becomes a mix of tactical thinking and old fashioned gunplay as you square off against waves of Monovisions. Being good at one aspect or the other should get you through the early levels, but as the game amps up the difficulty you better be able to gun down tubes with your mech while simultaneously planning a defensive strategy or you’ll be seeing more of the mission failed screen than you’d like.

Adding to the game’s tactical feel, you can only select a limited number of entrenchments to take into battle, and each one requires “scrap,” an in-battle currency dropped by defeated tubes, to deploy and later upgrade. It’s yet another way the game keeps the pressure on from start to finish as those precious moments between waves are often spent in a mad dash to pick up scrap.

After each mission you earn experience points (weapons and armour unlock at certain levels) and are given new weapons, equipment and cash to spend at the store. Items can also be found during battles in the form of loot boxes (usually dropped by larger enemies) as well as earned by completing the game’s many Call of Duty style challenges. There’s tons of stuff to obtain and unlock, which should keep you grinding away to earn new stuff long after you’ve finished the campaign.

While Trenched offers up a very good single-player experience, the game is really meant to be played with friends — well, online friends anyway, as there is no split-screen co-op available. Enemy strength scales to keep the challenge level high, and you’ll absolutely need to be on the same page as your teammates or things can fall apart in a hurry. Pre-match planning on the deck of the USS McKinley (which serves as a really cool lobby) can make or break a mission as you decide who is going to fill what role in the upcoming battle.

As cool as that can be, it does give rise to two issues. One, because it focuses on multiplayer, the later stages of the single-player campaign can become pretty frustrating as the enemy launches assaults that are literally impossible for one person to adequately prepare for. You can still win, but it has a different vibe than earlier missions where you felt like proper preparation gave you a decided advantage over your enemies.

Secondly, and perhaps more significant, is that the reliance on teamwork makes random multiplier a hit or miss proposition. It reminds me of the launch of Halo: ODST, when Firefight was introduced without matchmaking capabilities. A lot of people were upset by this, but Bungie indicated the mode was meant to be played with friends. Well, Double Fine is offering matchmaking, but I wonder how enjoyable it’ll prove to be for those forced to saddle up with strangers.

By deftly merging action and strategy into one extremely polished package, Double Fine has delivered another excellent downloadable title. Even priced at the upper end of the Xbox Live Arcade spectrum, Trenched is a bargain.

By Herija Green
This entry was posted on Wednesday, June 22nd, 2011 at 10:26 am and is filed under Herija Green, Video Game Reviews. You can follow any responses to this entry through the RSS 2.0 feed. You can leave a response, or trackback from your own site.