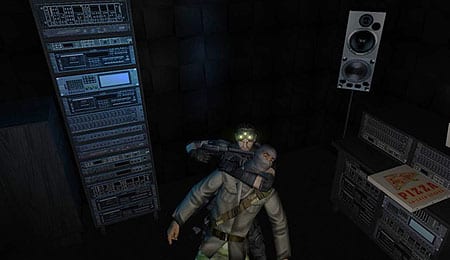 Splinter Cell’s Sam Fisher is an icon in the realm of stealth gaming, so much so that Solid Snake asks Colonel Campbell “Can’t Sam go do it?” in a mini-game included with Metal Gear Solid 3: Snake Eater. While Solid Snake’s outings take place in a near-future where mechs and nanotechnology go hand-in-hand with global conspiracies, Sam Fisher’s adventures are very much based in the real world. This is a Tom Clancy game, after all, so Sam as much an American as he is a grizzled ass-kicking secret agent.

The Splinter Cell series and Metal Gear Solid series are the tentpoles of the stealth genre, so it’s appropriate that both have HD re-releases of earlier games. The Splinter Cell Trilogy is really a tale of two games, not three. Though all appeared on last-generation systems, Splinter Cell and Splinter Cell: Pandora Tomorrow use the same engine and could really be lumped together — thus, they have the same gameplay flaws. Splinter Cell: Chaos Theory uses a revised engine, which makes for a much more refined gameplay experience.

Have the games aged well? The answer is a resounding yes for Chaos Theory; the other two, not so much — and it doesn’t help that Ubisoft didn’t add the extra level of graphical polish outside of the gameplay. Let’s dig a little deeper into Sam’s adventures — from the shadows using night-vision goggles, of course.

Sam Fisher is best known for his glowing tri-focal goggles, and while you won’t always use these, you’ll certainly constantly see them (which begs the question, if Sam is totally hidden in the dark, why can’t the enemy see the three glowing lights?). Goggle functionality — night vision, thermal vision, and EMF detection — is controlled using the directional pad, with different options based on individual games, as well as your mission-specific gear.

As a series, Splinter Cell is different from Metal Gear Solid with its use of a menu-drive interface. For example, when you go up to a door, various options will appear in the upper right corner. Pressing “X” allows you to select your action, from simply opening the door to using optic cable for a sneak peak. Options are contextual, and with each successive game, the options grow bigger rather than forcing you to equip items first. This also includes grabbing enemies and/or interrogating him.

Sam can do all of the necessary stealth moves: walking with a crouch, sticking against a wall, climbing up and around stuff. When between two close walls, you’ll have the option of doing one move Solid Snake can’t do — tapping triangle at the height of a jump will cause Sam to kick both legs out to hold him up between the walls. Considering this, it does seem a bit strange that he can’t crawl or lay flat on demand — it’s a contextual action.

Distraction is key when hiding in the shadows. In Pandora Tomorrow and Chaos Theory, Sam can whistle to catch the attention of guards. In all three games, Sam can grab random objects and toss them using the aim/trigger buttons. Or, if you prefer the more direct approach, you can pull out your gun and attempt to rack up the body count. However, you’ll quickly find that your gun is better used for shooting out lights than taking out soldiers.

The first two games are hit-and-miss when it comes to graphics. Environments have been upscaled to HD resolution, though the textures haven’t been retouched. Sam himself still looks good, though enemies and some areas have noticeably suffered. Animation can be a problem as well, as flicker and slowdown rear their ugly head in more situations than you’d like to see in any big-studio game. Chaos Theory’s upscaling is much better, and many of the environments and models look like they could have been a first-generation PS3/XBox 360 game.

Light is its own character in Splinter Cell — it can kill you or protect you depending on how you use it. Despite dated technology, the light engine is strong even in the original game. The shading during movement through various lighting still animates well, though there’s more variety and strategic placement in the successive games.

The visual production quality increases from game to game; the first game has embarrassingly bad mouth/voice sync and the character models used for cut scenes look like animated mannequins, especially the TV news scenes. There’s incremental improvement in Pandora Tomorrow, and a giant leap forward in Chaos Theory, both in the cinematic feel of cut scenes and the technical quality of the production.

Menu screens and stills are still in stretched standard def, as well as all cut scenes. This is the faster, easier way to produce these HD re-releases, and it’s disappointing because they amplify flaws that carry over from the original releases. We saw the same quality with the Prince Of Persia trilogy re-release, and it’s not too surprising that this was put out by the same company.

While the principle voice cast fares well, a lot of the soldiers and supporting cast are sometimes shockingly bad. I even did a double-check on production dates to make sure we weren’t going into Resident Evil territory; soldiers and support ops characters almost sound like they were drafted out of the Ubisoft offices based on their “generic foreign accent” ability rather than an actual casting agent. This is particularly noticeable in Pandora Tomorrow, and is more jarring because of the addition of the almighty Dennis Haysbert (24’s President Palmer and, more appropriately, The Unit’s Jonas Blane). Sam and his team create a mood and realism with their banter, then a supposed foreign terrorist walks in and starts talking like he works at an Idaho Jiffy Lube.

Re-releases should be judged on a curve based on the context of their development date. It’s understandable that upscaled 2003 character models won’t look like Nathan Drake but Ubisoft has only given detailed attention to some, not all, of the graphics. As for the audio, we’d seen more than our share of stellar voice acting by the time these games came out, so it’s the fault of the original development studio rather than being a victim of time gone by.

As an operative of Third Echelon, Sam Fisher has elite skills in infiltration, sneaking around, and discreetly killing bad dudes. Not surprisingly, that’s the majority of the series’ gameplay. Unlike Metal Gear Solid, the game is broken up into mission segments, with narrative text/short cut scenes transitioning you from location to location. Within each location, Sam is usually driven to find something or kill someone. Pick a lock? Go in with force? Sneak around the action? Your requisite grab-bag of spy tricks is at your disposal (with the options growing through each successive game), and how you get there is most of the fun.

Fun, of course, is relative, and you’ll have a lot less of it with the first two games. For starters, those games find Sam with the shooting accuracy of a stormtrooper. This guy’s supposed to be best-of-the-best special ops and he can’t do a headshot with a pistol from five feet away? Not only does this alert the guards instead of an instant kill, it wastes precious ammo (Sam never learned Solid Snake’s trick of stealing supplies off bodies) — ammo that you could also use to shoot out lights or destroy cameras to create better conditions for sneaking around.

Similarly, his close-quarters-combat skills wouldn’t impress Solid Snake; the first two games’ clunky melee combat essentially consists of one slow swinging elbow. This is particularly frustrating because of the series’ well-executed reliance on light and shadow lets you ninja out of a particular situation, only to be doomed by your slow-moving attack.

All of this is compounded by poor collision detection that sometimes finds you either completely missing from close up or bumping into a guard while you’re a step away; similarly, you’ll catch on a table or a wall when you least expect it. Much of this is remedied in Chaos Theory, where Sam becomes a fully realized sneaking/killing machine thanks to crisper controls, more melee options, and a better overall engine. However, this really brings down the experience of the first two games.

Certain elements are consistent within the series. Your visibility is gauged on your HUD, making it easy to judge whether or not enemies can see you. When you knock out/kill an enemy, you’d better hide the body in a dark spot; otherwise, other guards will stumble upon the evidence and raise the alert level. It’s not just about the knock-out or kill; how you do it, when you do it, and the aftermath all matter as you proceed to your end goal. Alert the guards at your own discretion — you just might find yourself re-loading time and again because of that.

Ah, yes — the alert level. The first two Splinter Cell games come with a high degree of difficulty, particularly by today’s standards. Depending on the mission design, one detection could send you back to your last save game. The included Quick Save/Load option becomes essential for anyone without superhuman patience, especially when the engine’s clunky collision detection screws you over on one of these areas. Like most of the other problems in the collection, Chaos Theory corrects much of this by introducing a more flexible alert system that doesn’t bring up the Mission Failed system upon one detection (Ubisoft developers were aware enough of this to have Sam crack a joke about it). All three games, however, allow you to use some level of creativity in achieving your objective (though the aforementioned control/collision issues sometimes stand in your way of executing your grand scheme) – for example, when facing a guard and a security camera, you can stealth your way through, distract the guard while destroying the camera, bait the guard into head shot range, and more. In these moments, the entire collection really shines and the tension is palpable.

In fact, that really represents the Splinter Cell experience. The stories aren’t particularly memorable (depending on if you loved or hated Metal Gear Solid, this can be a good thing or bad thing) and there are technical problems all over the place. But in those quiet moments, flipping on your night vision to pick a lock while the guard slowly turns the corner is exhilarating.

This is a difficult collection to judge, as these games were made several years ago on dated technology, and Ubisoft didn’t exactly apply layers of polish to the upgrade. Based on level design, equipment, and options, both Splinter Cell and Pandora Tomorrow are enjoyable — if dated — stealth entries. However, their technical problems can be infuriating, especially when it leads to a cheap Mission Failed status and you realize you haven’t saved in the past few minutes.

Chaos Theory is by far the best title in the collection, and for gamers with little patience, I’d almost recommend just skipping the first two and jumping straight into this one. The first two games get a 3/5 and should only be for completionists while the third game gets an 4.5/5; as a collection, that averages out to 3.5 out of 5. If you’re looking only to play Chaos Theory, I’d recommend waiting to see if the game becomes individually available on PSN (right now, you can only download the bundle).

By Mike Chen
This entry was posted on Wednesday, October 5th, 2011 at 3:10 pm and is filed under Mike Chen, Video Game Reviews. You can follow any responses to this entry through the RSS 2.0 feed. Responses are currently closed, but you can trackback from your own site.