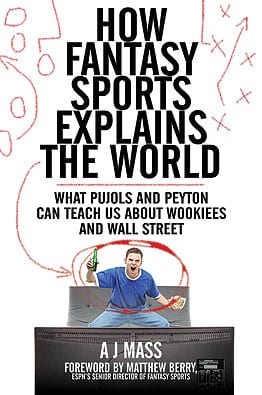 This is an amusing book, but a Fantasy sports book? Not really…

When you look for books in a store or online, the first thing you see is the title. That one line will make or break a book’s success in the eye of the potential reader. When I first heard the title: How Fantasy Sports Explains the World, by ESPN Fantasy sports analyst AJ Mass, I was excited to get my hands on it as this is right up my alley since I cover Fantasy sports for various NFL and NBA teams.

The book starts with a foreword written by Matthew Berry, who is widely known in the Fantasy sports industry. It is an interesting look at Mass’ early years and how he developed into who he is today, but not something that has any real Fantasy impact. As it turns out, it was actually a preview of what was to come — an amusing story with a hint of Fantasy sports mixed in.

There are plenty of amusing stories in the book, with the most interesting being the opening chapter about Allen Iverson and a true story of how A.I. can be in real life. Everyone has their demons inside them, but Iverson’s may be more prominent because he seems to have a few too many “yes men” around him with too few real friends that will tell him the hard truth. Mass demonstrates this very well, but the Fantasy content didn’t come in until the final two pages of a 22-page chapter.

From that point on I noticed that each chapter was a story from the author’s perspective, with a Fantasy fact or opinion seemingly thrown in to keep with the theme of the book. I honestly couldn’t tell you what Chapter Two was about and Chapter Three had little to do with who Jesus would draft, contrary to what the chapter’s title suggested. That was when the book really just became a blur as chapter after chapter had precious few paragraphs about Fantasy sports out of the roughly 20 pages each chapter comprised.

The reality of this publication is this: If you want a book where you get to hear amusing or somewhat funny details from a person’s past, this will do the trick. But, if you are a Fantasy sports enthusiast hoping to get some inside info of how to be a better Fantasy owner from a guy who writes for ESPN, this book doesn’t even come close. I read it with the second perspective, and that is where the problem comes in.

Much like the Nintendo Wii, you have to really understand what you are getting into before you buy it. The Wii is a kids’ gaming system or a party system not to be played by serious gamers; this book is more amusing to the avid reader than something Fantasy honks should run to the store and buy for insider info. You can give it a read, but understand what it is and what it isn’t before doing so.

By James Morris
This entry was posted on Thursday, October 6th, 2011 at 3:00 pm and is filed under Book review, James Morris. You can follow any responses to this entry through the RSS 2.0 feed. You can leave a response, or trackback from your own site.