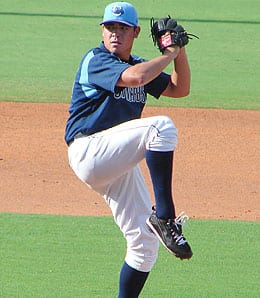 Matt Moore could have a big impact on the Al Wild Card race.

After his monster 2010 season, we expected Chris Young to be a top 25 outfielder this season. Well, he’s definitely had his moments (seven homers, 20 runs and 21 RBI in April; .300 with six homers, 16 runs and four steals in June), but for the most part, he has not delivered on our expectations, and has probably topped out as a top 40 flyhawk.

Well, after a bad July (one homer, .681 OPS), a butt-ugly August (.149 BA), and a sluggish start this month, Young is finally turning it on. On Monday, he doubled, walked twice and scored twice, and over the past four games, he’s now gone 6-for-13 with six runs, four RBI, four doubles, four walks, a homer and a steal.

Could he finally be shaking off a thumb woe that’s bothered him for some time?

Despite his generally disappointing season, Young has reached 20-20 for the second straight season and third time in his career and he’s managed to cut his strikeout rate modestly. He’s not getting on base at the same clip as last year and his power has dipped somewhat, but you could argue that Young has made some progress this season. Because of his propensity to run hot and cold, he’s a frustrating player to own, but 20-20 dudes don’t grow on trees, and if your league is shallow enough that his September swoon caused him to be cut, grab him now and ride out this hot streak.

Heath Bell not only survived the July 31 trade deadline, but he also made it past the waiver wire deadline, remaining a Padre and burning owners of Luke Gregerson.

He’s uncharacteristically been a bit shaky lately, blowing two of four save chances before tossing a hitless frame Sunday for his 37th save of the season.

In fact, you can’t help but wonder if all the trade talk got to Bell somewhat.

Consider that after his sparkling July, he gave up 11 hits and five runs (four earned) in 9 2/3 IP in August. Now that hardly qualifies as a bitch slapping, but for Bell, that’s a slump. September has seen him yield two homers in 4 2/3 IP, again very noteworthy considering that’s the same number of long balls he coughed up in the first five months of the season combined.

Still, Bell owners can’t be crying too much these days as their stud closer in inching towards his third straight 40-save season, the type of consistency not usually associated with the position, Mariano Rivera aside. In fact, assuming Bell does nail down at least three of the Padres’ final 14 games, it will make him the only pitcher in baseball to record at least 40 saves in each of the past three seasons. Like I said, it’s rarified air.

Tampa Bay looked toast a couple of weeks ago, but its pitching has helped get it right back in the race. If the Rays score a few runs, it’s over. In fact, after beating the Orioles 5-2 Monday to shave Boston’s Wild Card lead to three games, the Rays have now won 22 straight games in which they’ve plated at least five runs.

As we Tweeted about Monday, the Rays have recalled their top prospect, Matt Moore. This is a dude we’ve been waiting on since late-June, a few weeks after the first wave of top prospects hit the Show.

Of course, given the Rays’ embarrassment of riches on the mound, they had no reason to rush another starter to the bigs. But now that he’s arrived, can the young southpaw provide any Fantasy value? For now, his value will be limited to deeper AL-only leagues as he’ll be used exclusively out of the bullpen while the Rays are still in the race. But should Tampa Bay be eliminated from contention, it’s possible Moore will get a start, and if so, he’ll definitely be worth gambling on as a streaming option.

Remember the impact David Price had on the Rays when they called him up in 2008 to pitch in relief?

For keeper league owners, Moore is undoubtedly already spoken for. After all, we’re talking about a dude that made a mockery of both Double-A and Triple-A this season, going 12-3 with a sub-2.00 ERA. But what really jumps out at you is his dominance (210 strikeouts in 155 innings) and his command (just 46 walks). This kid has future MLB strikeout champion written all over him, so if for some reason he’s available in your keeper format, you need to rectify that situation pronto.

By RotoRob
This entry was posted on Tuesday, September 13th, 2011 at 12:10 pm and is filed under BASEBALL, MLB Today, RotoRob. You can follow any responses to this entry through the RSS 2.0 feed. You can leave a response, or trackback from your own site.