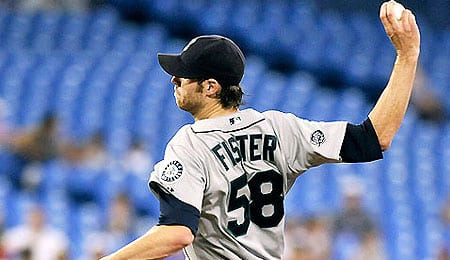 Yes, we also thought Doug Fister would struggle away from Safeco.

I’d be very remiss if I didn’t mention what is undoubtedly one of the most anticipated moments of the 2011 season. In what is guaranteed to be the hottest ticket in Washington this year, Stephen Strasburg makes his much awaited return to the Nationals’ rotation Tuesday against the Dodgers. Is he ready? In his final rehab start Thursday, he pitched six innings of one-hit ball with four strikeouts against Portland. It’s hard to recommend buying Strasburg at this stage as he’s owned in 87 per cent of CBS leagues but for those Fantasy owners that invested early, Tuesday is going to be a very exciting evening. Without further ado, let’s get to the matter at hand and give this week’s Wire Troll picks the once over.

Doug Fister, SP, Detroit Tigers (CBS: 77 per cent owned, Yahoo!: 35 per cent): I’ve never been a Fister fan (please, no comments are required) and actually expected him to struggle with the move to Detroit from the cozy confines of Safeco. However, he’s doing his best to make a liar out of me as he’s coming off three solid starts in which he’s won twice and allowed only two earned runs. He’s also managed to strike out 18 over that span, which is bordering on Nolan Ryan-esque for the normally strikeout-challenged Fister. He’s a two-starter this week with Cleveland and Minnesota on the agenda and he wraps up the 2011 campaign with games against Oakland, Baltimore and another start versus the Tribe. Does it get much better than that? (Okay, granted… it does get better once gummy bears are introduced.)

Dee Gordon, SS, Los Angeles Dodgers (CBS: 22 per cent owned, Yahoo!: 4 per cent): The Dodgers activated Gordon from the DL Thursday and in the three games since his return he’s gone 6-for-11 with five runs scored and two thefts. No wonder RotoRob Tweeted him up Saturday evening. Batting in front of the hot-hitting James Loney and Matt Kemp should garner Gordon with opportunities to help you pad both the runs scored and stolen base categories down the stretch.

Alex Presley, OF, Pittsburgh Pirates (CBS: 12 per cent owned, Yahoo!: 4 per cent): Presley missed a month with a left thumb contusion and — as is often the case with hand injuries — struggled upon his return. In his past three games, however we’re seeing the Presley we saw earlier in the season as he’s gone 8-for-13 with one homer, two RBI, four runs scored and a stolen base. Presley is working very hard to show the Pirates brass that he belongs alongside Andrew McCutchen and Jose Tabata in the Pirates outfield in 2012, so Don’t be Cruel — give him a look.

Brandon McCarthy, SP, Oakland Athletics (CBS: 55 per cent owned, Yahoo!: 27 per cent): McCarthy has been on quite the roll lately culminating in Saturdays’ complete game three-hit, 10-strikeout gem against the Mariners. We’ve now seen back-to-back 10-K performances from McCarthy. Toss in the fact that he’s won three of his last four starts and only allowed six walks in his last six starts (a span of 42 IP) and you have a starter that should be rostered and active in all formats.

Kenley Jansen, RP, Los Angeles Angels (CBS: 8 per cent owned, Yahoo!: 4 per cent): The hard tossing Jansen has returned from his latest DL stint and was immediately inserted into the mix for saves in the Dodger bullpen. In 42 2/3 IP, he has amassed an incredible 70 strikeouts and demonstrated he has the stuff to be a successful closer in the bigs. Small wonder we pumped him up in our Saving Grace column last week. Javy Guerra has done a solid job in the ninth for the Dodgers, but expect Jansen to be in the mix for saves down the stretch as the club evaluates its options for next season.

Jason Motte, RP, St. Louis Cardinals (CBS: 16 per cent owned, Yahoo!: 16 per cent): Motte has been the closer-in-waiting seemingly forever in St. Louis and is enjoying an outstanding campaign in 2011. He hasn’t allowed an earned run going all the way back to June 23 against Philadelphia, a mind-boggling string of 33 consecutive appearances. He’s earned the right to close out games and with two saves in his past five appearances, Motte is getting that chance from Manager Tony LaRussa. If a sprinkling of saves down the stretch is a difference maker to your Fantasy aspirations, get Motte rostered and active immediately.

Alejandro De Aza, OF, Chicago White Sox (CBS: 8 per cent owned, Yahoo!: 3 per cent): Alex Rios has been in a season long funk and Carlos Quentin is on the DL dealing with left shoulder sprain. There are playing time opportunities in the White Sox outfield and last week De Aza went 5-for-14 with two homers and five RBI. He now has the Twins’ patchwork rotation to look forward to for four games this week. This scenario has opportunity written all over it.

R.A. Dickey, SP, New York Mets (CBS: 42 per cent owned, Yahoo!: 18 per cent): The 36-year-old knuckleballer hasn’t allowed more than four earned runs in an outing going all the way back to May 14 against the Astros. He’s been about as consistent as a knuckleballer can be this season and with Florida and the Cubs next on the schedule there is no reason to anticipate that changing.

Luke Hughes, 1B/2B, Minnesota Twins (CBS: 3 per cent owned, Yahoo!: In his past seven games, Hughes has mashed four homers with 12 RBI and scored seven runs. Somebody forgot to tell him he’s Luke Hughes and not Luke Scott, but have no fear he’ll wake up one day and remember he’s the journeyman with middling power. In the interim, get Hughes rostered and active in AL-only and deep formats.

Randy Wells, SP, Chicago Cubs (CBS: 21 per cent owned, Yahoo!: 13 per cent): Wells now has three wins in his past four starts and is showing some strikeout potential with 19 in 27 2/3 IP during his current hot streak. He makes for a decent option if you’re looking to stream pitching in an effort to make up ground in the wins category.

Chris Capuano, SP, New York Mets (CBS: 46 per cent owned, Yahoo!: 14 per cent): Capuano is coming off back-to-back solid starts including a two-hit, 13-strikeout shutout against the Braves. The southpaw has the Marlins and Cubs next on the schedule. ‘Nuff said.

Devin Mesoraco, C, Cincinnati Reds (CBS: 12 per cent owned, Yahoo!: 1 per cent): Mesoraco, the 23-year-old Reds’ catcher of the future — another player RotoRob Tweeted about recently — is going to get limited opportunities to display his skills down the stretch. Ryan Hanigan and Ramon Hernandez are both still around in Cincinnati, but Mesoraco should still get a sprinkling of starts in September as the Reds evaluate their 2012 options. Until his PT chances are a bit clearer, he’s best left for NL-only formats.

Leonys Martin, OF, Texas Rangers (CBS: 12 per cent owned, Yahoo!: 0 per cent): Martin is looking at limited at-bats until the division race has been decided, but it’s still a great opportunity to get an early look at the tremendous on-base skills and speed of the Rangers’ potential 2012 starting centrefielder.

Adeiny Hechavarria, SS, Toronto Blue Jays (CBS: 2 per cent owned, Yahoo!: NA): Jays’ shortstop Yunel Escobar suffered a jammed left wrist Saturday against the Yankees and he’s day-to-day at this point. If Escobar is sidelined for any extended period, expect Toronto to place a call to Las Vegas and call up the hot-hitting 22-year-old Hechavarria.

Finally, have you checked out RotoRob TV yet? Scroll up to the top of the page and give it a whirl!

By Tim McLeod
Tags: Detroit Tigers
This entry was posted on Sunday, September 4th, 2011 at 1:19 pm and is filed under BASEBALL, The Wire Troll, Tim McLeod. You can follow any responses to this entry through the RSS 2.0 feed. Both comments and pings are currently closed.