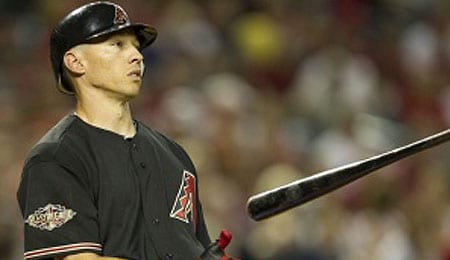 Other than a big dinger, Cody Ransom wasn’t exactly a hit in his latest look in the Show.

Veteran minor leaguer Cody Ransom is having a big season at Triple-A, but he seems to have forgotten how to swing the bat since he was sent back to Reno after a month with the Diamondbacks. The 35-year-old infielder hit .383 with five homers and 15 RBI in 16 games in July before his promotion to the D-Backs, his first taste of the Show this season.

Notwithstanding a big dinger against Clayton Kershaw, Ransom continued to prove he can’t hit big league pitching, and his MLB visits are getting shorter and shorter as a result. But since Arizona DFAed him to send him back to the minors, Ransom can’t even hit at Triple-A. He’s just 3-for-25 since heading back down and on Sunday he scored his first run in almost a week.

A couple of years ago, we lay witness to his ineptitude as a utility infielder. Now we wonder how much longer it’ll be before he winds up in an Indy league.

The way RHP Graham Godfrey is pitching lately at Triple-A, he could be in line for another shot with the A’s once Sacramento’s season wraps up. He’s won his last three starts for the River Cats (with one less than awe inspiring spot start with the A’s mixed in) to take over the PCL lead with 14 wins.

Having turned 27 last month, Godfrey isn’t exactly a prospect, but he had a couple of decent starts with the A’s earlier this year, including an impressive seven-innings of one-earned run ball on May 17 against the Giants for his first big league win.

Still, you’ve got to think he’s at least put himself in the mix for a job in 2012 with his breakout campaign at Triple-A. Godfrey has massively improve his hit rate, improved his control and beefed up his strikeout rate.

Acquired from the Jays in the Marco Scutaro deal in 2007, Godfrey will need to bring his Triple-A strikeout numbers with him to the Show if he has a chance to stick, but he’s at least put himself on the map with his performance this season.

By RotoRob
This entry was posted on Monday, September 5th, 2011 at 12:53 pm and is filed under BASEBALL, Minor Matters, RotoRob. You can follow any responses to this entry through the RSS 2.0 feed. You can leave a response, or trackback from your own site.