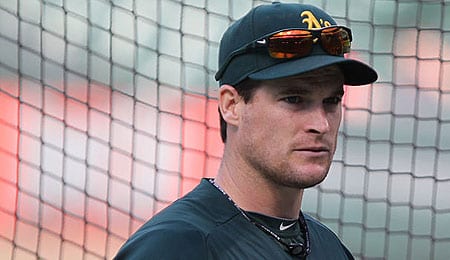 Let’s try this again: give Josh Willingham a look, people.

Tim was unavailable to complete the Troll this week as he was last seen wandering into the deep woods of Minnesota, following a giant trail of gummy bears to parts unknown. Fortunately, he did send along enough notes for RotoRob to compile it into what you’re reading now. And now to the recommendations of the week…

Josh Willingham, OF, Oakland Athletics (CBS: 47 per cent owned, Yahoo!: 30 per cent): Godzilla isn’t the only bat in the Athletics’ lineup to heat up. We recommended Willingham back at the beginning of June, but apparently none of you were listening. Well, you missed his five-homer, 16 RBI, .324 July. You also missed his homer binge last week when he went yard in three consecutive games. Willingham is up to 19 homers and 66 RBI in 340 at-bats for the season. Yes, he’s somewhat good, but few are capitalizing on it.

Jesus Montero, C, New York Yankees (CBS: 35 per cent owned, Yahoo!: 6 per cent): Back in the middle of May, when the Jorge Posada drama first began, we recommended grabbing Montero, who has a chance to be an impact catcher. Well, we were a wee bit quick on the draw as for some reason Posada is still around, but his role continues to diminish. Meanwhile at Triple-A Scranton/Wilkes-Barre, Montero has shaken off a slow start and really excelled the past couple of months. He’s up to .283 with 13 homers and 55 RBI and his pending promotion – more a matter of when not if – continues to be one of the most highly-anticipated moves of the season in the Bronx. Take the opportunity to stash him now before he costs you dearly in FAAB dollars.

Rafael Betancourt, RP, Colorado Rockies (CBS: 9 per cent owned, Yahoo!: 14 per cent): Huston Street has hit the DL with a mild right triceps strain and the Rockies have moved Betancourt into the closer role. Betancourt hasn’t done anything off the charts in recent years, but he’s established himself as a very steady set-up man. In 47 1/3 IP so far, he has allowed 43 hits while walking just eight against 56 strikeouts with a 1.08 WHIP and 3.61 ERA. He’s probably just a short-term fix if you need saves, but with Street — who has turned more than his share of “minor” injuries into long-term stints on the DL — you never know.

Casey Kotchman, 1B, Tampa Bay Rays (CBS: 41 per cent owned, Yahoo!: 16 per cent): In 358 at-bats, Kotchman is up to eight homers, 39 RBI and a stellar .335 BA, which has him tied for the third highest mark in baseball. Last week, he slugged three homers with six RBI and is finally delivering on the potential we saw when he was a top prospect coming up in the Angels’ organization. The Rays took a gamble here that paid off in spades after they signed him to a minor league deal in the offseason. Hell, we thought Kotchman would have to compete for PT with Dan Johnson, which tells you how much his emergence caught us off guard as well.

Will Venable, OF, San Diego Padres (CBS: 14 per cent owned, Yahoo!: 4 per cent): Venable is occupying the good side of a platoon and his bat has been coming around. Last week, he went 9-for-23 with five runs and three steals while hitting at the top of the Padres’ lineup. For another season that most would consider to be a huge disappointment, he now has his batting average up to .265 and is 22-for-25 on the basepaths.

Esmil Rogers, SP/RP, Colorado Rockies (CBS: 12 per cent owned, Yahoo!: 2 per cent): The trade of Ubaldo Jimenez opened the door for Rogers to move back into the rotation and he’s been shockingly solid since the move. He’s reeled off a string of three consecutive wins (which actually stretches to four if you count his last start in late-April) while only allowing a total of four earned runs. The Dominican righty has chipped in with 16 strikeouts over that stretch. Give him a look in NL-only, H2H, and deeper mixed leagues.

Yuniesky Betancourt, SS, Milwaukee Brewers (CBS: 58 per cent owned, Yahoo!: 29 per cent): What’s this? The all-Betancourt edition of the Wire Troll? He’s been a waiver wire darling of late as his ownership level in CBS leagues has jumped from 19 to 58 per cent in the past two weeks. On the year he’s now up to nine homers, 51 RBI and a .270 BA in 403 at-bats. Betancourt has been on fire this month with two homers, 11 RBI, and an incredible .391 BA in 11 games. If this keeps up, he’s going to be a lot more popular with Fantasy owners real soon.

Edgar Renteria, SS, Cincinnati Reds (CBS: 4 per cent owned, Yahoo!: 2 per cent owned): The season-ending injury suffered by Zack Cozart has resulted in playing time opportunities and Renteria is taking full advantage. In the last week, he has two homers, three RBI, and three runs scored, going 6-for-23. We know, it’s been a lifetime since was the hero for the 1997 World Champion Marlins, but right now, Renteria is worth a look in NL-only leagues.

Salvador Perez, C, Kansas City Royals (CBS: 2 per cent owned, Yahoo!: unowned): The Royals purchased the contract of Perez from Triple-A Omaha on Wednesday. Another in a fine line of top prospects getting playing time opportunities in Kansas City this season, the 21-year-old is a sizable backstop at 6’3”, 230. At two levels this year, he’s combined for 10 homers, 53 RBI and a .290 BA in 334 at-bats. Give Perez a look in AL-only and dynasty leagues for now, but he will get the opportunities to play so keep him on the radar in two-catcher formats.

Brian Matusz, SP, Baltimore Orioles (CBS: 22 per cent owned, Yahoo!: 19 per cent): Matsuz is expected to get the call and start Tuesday in place of Chris Tillman, who got absolutely spanked in his latest audition in Baltimore. It’s been a long haul for Matusz, but he sure looked sharp after his last outing at Triple-A Norfolk — a complete-game five-hit gem. In his last two starts at Norfolk, he’s allowed only one earned run with 14 strikeouts in 16 IP. We recommend Matusz for use only in AL-only leagues as he probably won’t return to his 2010 second half form until next year.

Peter Bourjos, OF, Los Angeles Angels (CBS: 22 per cent owned, Yahoo!: 14 per cent): At the beginning of July, we recommended Bourjos, but shortly after that he hurt his hammy. He’s back now and rolling, lifting his BA to .265. His superb glove will keep him in centre field, but he could surprise with middling power and solid speed down the stretch (he’s up to 15 thefts).

James Darnell, 3B, San Diego Padres (CBS: 5 per cent owned, Yahoo!: unowned): Former South Carolina star Darnell is a name for dynasty league and keeper format owners. He’s currently replacing 3B Chase Headley, who is on the DL for four-to-six weeks (and likely done for the season) with a fractured finger, but long-term, Darnell projects as an outfielder. At two levels this year, he’s combined for 23 homers, 75 RBI and a .317 BA in 391 at-bats, making him a target for NL-only league owners.

Kevin Slowey, SP, Minnesota Twins (CBS: 7 per cent owned, Yahoo!: 1 per cent): To replace the injured Scott Baker, Slowey is being recalled to start Sunday against the Tribe, giving owners the opportunity to see how he fares before the trip to the wire Sunday night. In 38 IP at Triple-A, the righty allowed 44 hits but only five walks with 29 strikeouts. That seems pretty much like the Slowey we’ve seen in the past so he’s worth a look in H2H and AL-only leagues at best.

Henderson Alvarez, SP, Toronto Blue Jays (CBS: 9 per cent owned, Yahoo!: unowned): Alvarez, 21, made his MLB debut Wednesday and scattered eight hits over 5 2/3 IP with one free pass and four Ks. He’s a two-start pitcher this week, but a risky one at that, so we’d suggest he’s only an option in H2H formats for those streaming starters and AL-only leagues. At Double-A New Hampshire, Alvarez went 8-4 with a 2.86 ERA, allowing 81 hits and 17 walks with 66 strikeouts in 88 IP.

Dontrelle Willis, SP, Cincinnati Reds (CBS: 21 per cent owned, Yahoo!: 4 per cent): Three months ago if you would have told us that Willis would be owned in any leagues at this stage of the season we’d have asked what you were smoking in that pipe. However, the lefty has put together four consecutive solid starts and struck out 10 in his last outing against the Rockies. Give him a look in NL-only leagues.

Dustin McGowan, SP, Toronto Blue Jays (CBS: 1 per cent owned, Yahoo!: unowned): It’s been a long road to recovery for McGowan, who was likely rushed to the majors too early way back when, but he’s now moved to Double-A New Hampshire in his rehab and Wednesday he pitched four shutout innings of one-hit ball with four strikeouts. He’s now 29 and hasn’t pitched in the bigs since 2008, but there’s a very good possibility we’ll see him return in September. There’s a reason the Jays have stuck this one out.

By Tim McLeod
This entry was posted on Sunday, August 14th, 2011 at 1:33 pm and is filed under BASEBALL, RotoRob, The Wire Troll, Tim McLeod. You can follow any responses to this entry through the RSS 2.0 feed. You can leave a response, or trackback from your own site.