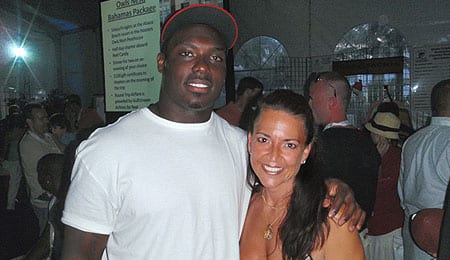 Ronnie Brown’s arrival is great news for Philly’s MILFs, but should not affect LeSean McCoy’s ability to rack up big numbers.

On Monday, I represented RotoRob in an Expert Mock draft over at Mock Draft Central. MDC uses the results of its by-invitation-only expert mocks to generate an Expert Draft ADP to further aid you in compiling your draft-day cheat sheets. This particular draft, a 12-team PPR format, featured some top-shelf industry players (including representatives from STATS, Sports Radio 630, KFFL and RotoWire), so have a look at the results and see if you agree or disagree with the individual strategies. The draft settings included:

The complete draft results can be found here.

My take: It was a bit surprising to see Adrian Peterson go before Arian Foster in a PPR format, but not as shocking as Michael Turner leaving the board at No. 12 overall. The guy’s a bell cow, but his lack of pass-catching skills means that he’ll need a bunch of short TDs to make up for those lost points. No other big surprises here, though Frank Gore’s injury history makes him a risky pick at No. 9

My pick: I love LeSean McCoy in PPR formats, and I’m not a bit worried that the ghost of Ronnie Brown will put a significant dent in his numbers.

My take: Where to take Michael Vick is one of Fantasy football’s most burning questions this year; I think the guy might lead the league in Fantasy points per game in ’11 – it’s the uncertainty surrounding how many games he’ll play that keeps me from pulling the trigger. Emil Kadlec doubles down on wideouts; hope he can scrounge a few runners later on. Speaking of runners, I loved the value on Steven Jackson at 2:12; he’s unquestionably The Man in what figures to be an improved Rams’ offense.

My pick: I strongly considered Matt Forte, Greg Jennings and Peyton Hillis here, but settled on Reggie Wayne’s history of consistent production. I think he’s in decline, but he’s a near-lock for 100 catches and 1,200 yards. I’ve been trying to grab a wideout in either the first or second round in leagues that start three receivers; the talent level drops off considerably in the middle rounds.

My take: Wes Welker is a PPR monster, and the Fantasy Consultant had to pull the trigger here, since the Pats’ wideout wouldn’t be on the board at 4:12. Marques Colston’s microfracture-repaired knee is already barking, and that scares me to no end. Kadlec continues to ignore running backs; I’m not sure Mike Williams will return this kind of value in a PPR format, as I expect Arrelious Benn to assert himself a bit more in 2011.

My pick: Nicholas Minnix broke my heart by taking Ahmad Bradshaw, but I was very happy to have a couple of fine options to choose from as my RB2. I like Ryan Mathews a lot this year, though I am prepared to watch Mike Tolbert vulture away a fair share of the goal-line work.

My take: Erin Skelley apparently loves her some Chad Ochocinco, as this felt rather early for the flamboyant flanker. He should do well in New England, but there are plenty of other options for Tom Brady in that offense. Kadlec grabs the first tight end, but may have played his hand a bit early, as it would be 26 more picks before our group would tab that position again.

My pick: I debated long and hard whether to take Jeremy Maclin or DeSean Jackson here, and I’m not sure that I made the right decision. Both are very talented, but Jackson is more of a big-play guy than a frequent-use guy – not a particularly good thing in PPR leagues.

My take: Kadlec finally grabs a running back, and I like his choice of Fred Jackson; C.J. Spiller won’t be nearly the factor some folks believe. I also liked Knowshon Moreno here; he’s another guy too many people have lost faith in. We had a nice little quarterback run early in the round; most industry vets subscribe to the “wait on quarterbacks” mantra, and this group was no exception.

My pick: I (and most of the western world) don’t think Brandon Lloyd will duplicate his lofty 2010 numbers, but as the top aerial option in Denver he isn’t exactly chopped liver in the middle of Round Five. I’ll take a chance on him as my WR3. I strongly considered Santonio Holmes here, too, and I believe that he and Lloyd will end up with similar numbers in 2011.

My take: I admit I was surprised by the tight end run at the end of the round; this is such a deep position I thought more owners would wait another round or two. Other than that, there were no major headlines this round, though it was apparent that wideouts were starting to thin out in a big way.

My pick: I felt some major Payne when Ryan Grant went off the board with the first pick of the round, but BenJarvus Green-Ellis makes a nice consolation prize. Boston Legal is essentially Michael Turner Lite – he doesn’t catch passes, but those one-yard dives add up.

My take: Skelley throws the book out the window and grabs the Steelers’ D; I’m not a fan of taking a defense this early, but the boys from Steel City are a safe bet to again be among the league’s elite in 2011. I was intrigued by Kadlec’s pick of Matthew Stafford when Ben Roethlisberger was still available; it may look like a stroke of genius by season’s end, but right now it poses more questions than a cross-country edition of Cash Cab.

My pick: I was targeting Matt Schaub here, but Santana Moss was too good a value to pass up. Washington’s quarterback situation is a mess (again) but Moss’ route-running skills makes him a fine security blanket for whomever is pulling the trigger in D.C.

My take: Our experts filled out their rosters this round, and I was surprised by Corey Parson’s pick of Jacoby Ford. Ford can fly, but I’m not sure I would have taken the plunge on him quite this early. This draft was held before the Braylon Edwards signing, so the Michael Crabtree pick was better then than it would be now.

My pick: I didn’t want to wait any longer for a quarterback, and I was pleasantly surprised to see Josh Freeman still on the board. I think that his 2010 breakout was the real deal, and that he’ll only get better this season.

My take: I was surprised to see Jeff Erickson (More must be better) pass on Run DMC’s handcuff to take Pierre Thomas, who will lose touches to Mark Ingram. I like the Johnny Knox pick here; I don’t see Roy Williams doing much in Chi-Town.

My pick: Davone Bess quietly – which is the way non bikini-related things happen in Miami – posted a 79-820-5 line last season, and I don’t see anything that would cause me to think he can’t at least do it again in 2011.

My take: Braylon Edwards was a free agent when the draft was held, so VanRiper’s pick paid big dividends when Edwards inked a deal with the Niners. I think he could be the top wideout in San Francisco before long, and he’s a fine sleeper pick once the big-name guys are off the board. I consider Edwards a No. 3 or No. 4 wideout, with a fair amount of upside.

My pick: Kellen Winslow is a solid enough tight end here, but he has about as much upside as a saddle-maker in a one-horse town. Next.

My take: I like Sam Bradford as a Fantasy backup this year; the Rams have added a few potential weapons for their franchise quarterback, and offensive coordinator Josh McDaniels should help Bradford take a big step forward in his second season.

My pick: LaDainian Tomlinson was basically a filler pick, but I think he should get in front of enough passes this year to have a fair amount of PPR value on some bye weeks.

My take: I liked the Devin Hester pick; the Bears are saying that the speedster will be a big part of their offense in 2011, and that alone makes him worth a Round 12 roll of the dice.

My pick: Freeman and Kevin Kolb? Man, there’s so much upside here my ears popped when I took the Arizona signal-caller. I think he’s in for a fine season in the desert, and Kolb could become a “1a” starter for me when Freeman has a tough matchup.

My take: Matt Cassel is very underrated, and I think he’ll post some fine numbers with both Steve Breaston and Jon Baldwin in the fold. I wouldn’t be surprised to see DeMarco Murray make a bit of noise in Big D before it’s all said and done.

My pick: There was no one I had particularly targeted this round, so I went ahead and grabbed an elite defense instead. There’s no harm nor foul in value shopping for a Fantasy D late in your draft, and the Pack should be among the league’s top units again in 2011.

My take: Not too much to say about this round, as our experts mainly selected their team defenses. I was surprised by Kadlec’s selection of Detroit over some more established units, but I do think that the Lions have some enormous upside.

My pick: Donnie Avery is a lottery ticket; he has arguably the most ability of the St. Louis wideouts, but has been unable to stay healthy long enough to prove it.

My take: Kickers. Meh. This is where you should take yours, too.

My pick: I needed a kicker. Rob Bironas is a kicker.

To recap, after 15 rounds of drafting, this is how my roster shaped up:

Granted, everyone likes their team right after the draft, but I can honestly say that I would happily take this team into battle in a PPR format. There is a good mix of established veterans and youngsters, along with a fair amount of upside and acceptable risk. But enough of what I think; tell us what you think.

By Buck Davidson
This entry was posted on Sunday, August 14th, 2011 at 3:32 pm and is filed under 2011 RotoRob NFL Draft Kit, Buck Davidson, FOOTBALL, Mock drafts. You can follow any responses to this entry through the RSS 2.0 feed. Both comments and pings are currently closed.