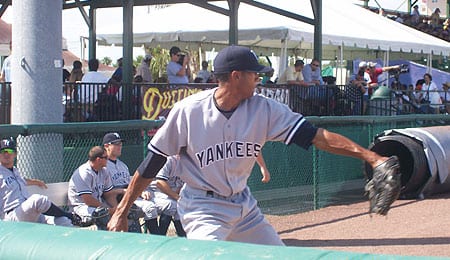 Could D.J. Mitchell get his first taste of the majors soon?

There’s been some talk that D.J. Mitchell, the Yankees’ 10th round pick in 2008, might be considered for promotion from Triple-A as New York could use a long reliever.

In his first full season at Triple-A, the 24-year-old has been quite impressive, especially lately, tossing extremely strong starts in four of his last five outings. All Mitchell has done in July is go 3-0 (including two shutouts) with a 1.07 ERA and just 12 hits allowed in 25 1/3 IP with 25 strikeouts. That’ll get your attention.

Yes, I’d say Mitchell is nearing his first crack at the Yanks. I really like the fact that he’s holding opponents to a .240 BAA for the season, and this – combined with a smooth delivery – bodes well for his future.

A couple of years ago, Mitchell was putting up nice numbers at High-A, but because he was already 22, he wasn’t getting much attention. Given that he’s progressed fairly quickly since then, I’d say he’s back on track as a prospect and he could top out as a No. 3 starter in The Show.

Scranton/Wilkes-Barre’s shortstop Luis Nunez had a nice game Monday, going 1-for-3 with two runs, an RBI and two walks, but nice offensive games from him have been a real rarity since he’s advanced to the higher levels.

In fact, even after the pair of walks, he’s only drawn 10 free passes in 54 games in this, his first full season of Triple-A. Nunez struggled out of the gate, missing April and hitting less than .180 in both May and June. In July, however, he’s showing a little something something, coming in at .276. It’s not much, but it’s a start.

Overall, Nunez has been extremely unproductive at the plate this year and looks like his best case scenario is to wind up as a utility man.

If Michael Morse hadn’t gotten so hot and seized his opportunity when Adam LaRoche went down for the Nats, it’s reasonable to wonder if we would have had a Michael Aubrey sighting in the majors for the first time since 2009.

This one-time top prospect in the Indian organization (11th overall pick in 2003) has bounced around baseball since Cleveland dealt him to the O’s in 2009. Even as recently as 2010, we thought he might be a Fantasy factor, ranking him as the 45th-best option at first base heading into last season. However, Aubrey missed some time with injuries last year and never got a sniff of the majors despite having a solid year at Triple-A (.235 BA, notwithstanding).

This year, Aubrey has been massively inconsistent, scuffling badly at the start of the season (.195 in April) before getting super hot in May (.333 with five homers and 16 RBI in 21 games). Aubrey slumped again in June (.210 with just six RBI in 24 games), but July has seen him heat up (.300 with nine RBI in 19 games). Now 29, it’s been clear for some time that Aubrey won’t ever deliver on the great promise he showed when first drafted, but if he can maintain his July play, he’ll deserve a look in Washington in September, if nothing else.

Another player that is hoping arrival in the National organization will be his ticket back to the bigs is Matt Antonelli. Part of a wave of Padre first rounders that went horribly awry, Antonelli did jack squat in his first taste of the Show, playing 21 games for the Padres back in 2008. We assumed he’d be ready to be an everyday player in 2009, but injuries limited him to 59 games at Triple-A and ineffectiveness assured that he didn’t get another look. Unfortunately, Antonelli still hasn’t been back to the bigs as he missed almost all of last season with a broken foot and other ailments. The Padres had seen enough, non-tendering him, and Antonelli signed with Washington.

He’s still only 26, so there’s definitely a chance Antonelli will resurface in the bigs, especially the way he’s raking this year. He’s struggling right now, but it’s been a very fine comeback season for the second baseman/outfielder. Antonelli has shown improved patience at the plate, and is hitting for a fine average, but we’re still waiting to see the power-speed combo he flashed earlier in his minor league career.

While we’re discussing players that got a brief taste of the majors a few years ago and have been trying to get back since, we’ll turn back to the Yankees and shortstop Doug Bernier. Originally in the Colorado system, Bernier ascended to the majors for a brief two-game stint in 2008, and hasn’t returned.

The following year was his first in the Yankee system, and Bernier was awful, hitting just .181 in 79 games at Triple-A. The 31-year-old was better last year (.240 BA, 626 OPS in 69 games), but still nowhere near good enough to warrant a call-up.

This year, Bernier has even better and is enjoying his finest Triple-A season since 2008, the year he did get his cameo appearance in The Show. The former Oral Roberts star had a huge game for Scranton on Monday, going 3-for-4 with a double, triple, run and four RBI, running his hit streak to a modest four games. Bernier was huge in April in limited action, sucked badly in May, but he’s hit better than .300 for the past two months.

He’s seeing more action this year and still strikes out more than you’d like for a guy with almost no power, but at least he’s heading in the right direction. Still, at his age, the chances are probably greater that Bernier’s next stop is the Independent Leagues as opposed to the major leagues.

By RotoRob
This entry was posted on Tuesday, July 26th, 2011 at 12:51 pm and is filed under BASEBALL, Minor Matters, RotoRob. You can follow any responses to this entry through the RSS 2.0 feed. You can leave a response, or trackback from your own site.