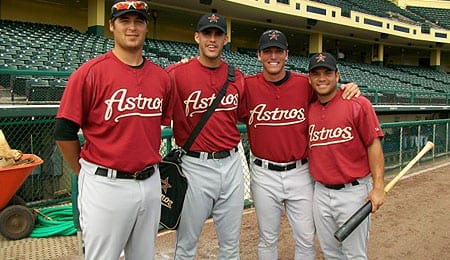 Jose Altuve (the tiny Astro on the right) has crazy pop for such a wee thing.

This week on the FantasyPros911 Show on Blogtalkradio, with Tony Cincotta off enjoying his vacation, Rich Wilson and I decided to go with a two-man format for a change of pace. Typing in the chatroom and carrying on a conversation on-air is something that everyone should try at least once.

We got the ball rolling by giving last week’s early deals the once over. The trade of Jeff Keppinger to San Francisco filled a hole in the Giants’ middle infield and at the same time created one in Houston that resulted in the promotion of super smurf Jose Altuve. How will the diminutive slugger fare? The Tigers finally tired of the struggling Brandon Inge and picked up Wilson Betemit in exchange for a pair of minor leaguers. Is Betemit a solid acquisition in mixed leagues for the duration of 2011?

Moving on, we had to discuss the trials and tribulations of being a Ricky Nolasco owner. Is there a more frustrating pitcher to own in Fantasy baseball? Josh Reddick appears to be in line for a steady diet of at-bats with the news that J.D. Drew is heading to the DL with a shoulder injury. After Reddick’s outstanding start, do the Red Sox stick with the kid or do they look outside the organization for help? It was a tough week in the Drew household as younger brother Stephen Drew broke his ankle in a home plate collision. The D-Backs appear to be looking at Willie Bloomquist to fill the void. Is he the answer or does Arizona try to fill the hole at shortstop through a trade?

In our next segment we examined some of the young prospects that have recently been called up. Desmond Jennings is finally back and after what he did in his first two games, we were wondering what took the Rays so long to promote him. Brandon Belt returns for another crack at making the Giants. Does he finally stick around in this, his third kick at the can? The Indians promoted Jason Kipnis and proceeded to sit him over the weekend. What up with that?

Anthony Rizzo struggled and was demoted and the Padres have turned to the oft-injured Kyle Blanks to fill the hole at first. He was tearing the cover off the ball at Triple-A, but Petco is a challenge for even the best hitters. Chien-Ming Wang appears to be slotted in to return in Washington after a lengthy layoff. It’s been a long time since those back-to-back 19-win seasons in New York. Finally, we took the opportunity to discuss Alex Cobb of the Rays. In his past five starts he’s allowed a total of five earned runs yet still seems to be flying under the radar.

Wrapping things up we jumped into our two-start pitcher segment and reviewed Kyle McClellan, Jake Westbrook, Chris Narveson, Juan Nicasio, and Andrew Miller. There is no shortage of intriguing options and favourable matchups for those looking to stream starting pitching this week.

A fun time was had by all and the full show can be heard by clicking on the play button below.

By Tim McLeod
Tags: Podcast
This entry was posted on Monday, July 25th, 2011 at 7:59 am and is filed under BASEBALL, Podcast, Tim McLeod. You can follow any responses to this entry through the RSS 2.0 feed. Both comments and pings are currently closed.