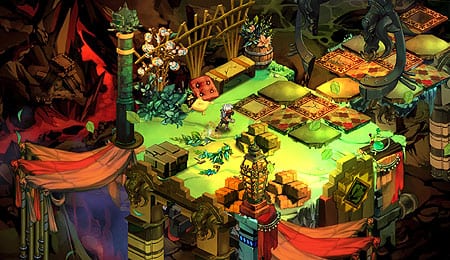 The Kid searches for a clever caption but comes up dry…

Now entering its fourth year, Xbox Live’s Summer of Arcade is Microsoft’s premier downloadable event, introducing gamers to such stellar titles as Braid, Castle Crashers, Shadow Complex and Limbo. This year’s version kicks off with the action RPG Bastion, but is Supergiant Games’ debut title worthy of such a prestigious spot? In short, yes.

As “The Kid,” you’ll do battle with two weapons (mapped to “B” and “X,” respectively) and a special skill (right trigger) offensively and an evasive roll (A) and shield (left trigger or left analog stick) on defense — consuming healing potions (Y) rounds out the controls. When engaging in melee combat everything flows smoothly. Unfortunately, ranged fighting can be pretty iffy. Auto-lock doesn’t work as well as it should and cycling through targets with the bumpers is painfully slow, though the issues top out at “frustrating” rather than downright flawed.

Visually, Bastion rarely passes up an opportunity to wow. It’s a beautiful world presented in a unique style as squares of the environment literally rise up beneath your feet, and watching the game’s locations sprout up like that is a trick that manages to never get old. You can also see the inspiration of past generations in the character design and rich colours, giving it a semi-retro feel while still standing on equal footing with the best the downloadable marketplace has to offer.

Much has been made about the game’s dynamic narration, which is handled by a voice that made me think of Sam Elliot (albeit a poor man’s version) with a calm, even demeanor. And while the narration is solid, it’s the game’s score that earns top marks. Not since Red Dead Redemption has a title stood out quite so much for its excellent use of original musical accompaniment. It’s done brilliantly.

Awakening to a world that has been effectively destroyed by an event known as “the Calamity,” you make your way to your people’s safe haven (“the Bastion”) to find that you’re the only person to reach the sanctuary. That means it’s up to you to save the world… at least what’s left of it. To do so you’ll need to venture into the remnants to find crystal shards to build up the Bastion, which operates as a central hub for all your adventuring.

The game’s story, while interestingly told via the dynamic narration, doesn’t cover any new ground and is a bit lacking in comparison to the rest of the presentation. It’s also quite linear, essentially breaking down into go here, defeat your enemies and grab a shard with little deviation from the main path. Each time you return you’ll be allowed to erect a new building to aid you on your quest. There are six in all, and you’ll eventually build/upgrade each of them, but you do have some control over what goes up first.

On the surface, Bastion plays like your typical action RPG with lots of hack and slash combat that doesn’t distinguish itself in the early going, leaving the game’s unique setting and storytelling to rope you in. It picks up fairly quickly, though, as you begin to find more weapons, each of which has its own strengths and weaknesses when going into battle.

For instance, the machete offers fast slashes and an option to throw the blade to take down smaller foes in large numbers, but it’s fairly weak so bigger enemies are tougher to handle. The hammer is the direct opposite with slow yet powerful blows. On the ranged front, you’ll have access to rapid fire guns (like the dual wielding pistols) as well as shotguns, long-range rifles and more. Add to that tonics that supplement your skills and the ability to upgrade each weapon up to five times with two options per upgrade and there are a lot of different combat alternatives.

Although bereft of difficulty settings, Bastion does feature something similar to the skulls in Halo where enemy attributes can be amplified to up the challenge. They can be turned on or off before any mission and reward you with increased experience and fragment collection, which serves as the in-game currency.

Expect to spend around six hours clearing the game the first time, which includes time spent on the proving grounds — specific challenges available for each weapon — as well as the dreamy “Who Knows Where,” which features 20 waves of challenging combat to test your mettle. Once you’re finished you’ll be granted access to a new game-plus mode, allowing you to carry forward all your accumulated goodies for a second go round.

Bastion opens Xbox Live’s Summer of Arcade in style by offering up enjoyable and surprisingly customizable gameplay against a truly unique backdrop. It’s one of the best downloadable titles this year.

By HC Green
Tags: Xbox Live Summer of Arcade
This entry was posted on Wednesday, July 27th, 2011 at 7:50 am and is filed under Herija Green, Video Game Reviews. You can follow any responses to this entry through the RSS 2.0 feed. Both comments and pings are currently closed.