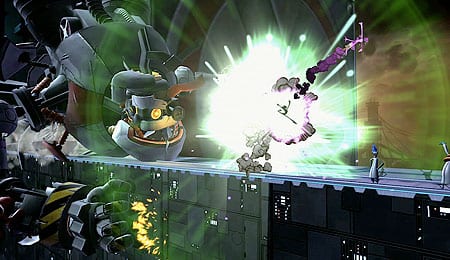 When I began reviewing games in earnest back in mid-2009, Splosion Man was among the first handful of titles that I covered. It was challenging, fun and irrefutably charming. Now, two years and well over 100 reviews later, Twisted Pixel is back with a proper sequel to its breakthrough release. Filled with the developer’s signature humour and clever level design, Ms. Splosion Man is a worthy successor, albeit one that treads a lot of familiar ground.

If you played the original you already know the deal. If not, here’s the 411, you’ve only got one move: sploding. You can splode three times in succession before you need a moment to re-ignite, though certain objects will do that for you instantly. There’s also a self-destruct if you get trapped, and co-op adds an on-screen countdown to time tandem jumps. Everything is crisp and responsive.

Like many elements of Ms. Splosion Man, the graphics are an amped up version of what was seen in the first game. It’s clear that the development team — unleashing the full power of the Beard graphics engine — wanted to demonstrate their growth over the last two years with a lot more variety going on throughout the game. It’s bright, colourful and hosts loads of dynamic activity.

That being said, the improved visuals prove to be a double-edged sword as there are times when it’s easy to lose track of your character. It usually happens when the camera pulls back to display more of the screen (reducing you in stature) or when there’s too much going on around you. A silhouette of your form that appears after sploding doesn’t help to reduce confusion, either.

Unlike her male counterpart, Ms. Splosion Man foregoes grunts and blabbering to unleash a torrent of 1980s and ’90s movie and pop culture quotes. There’s some funny references worked in, but gamers under a certain age won’t get it. The soundtrack features basic upbeat tunes along with a couple original songs in the vein of “Donuts, Go Nuts” (which returns as the Pause song). Of the new batch, the hilarious “Badonkadonk” earns special kudos.

Those poor brainiacs at Big Science just can’t catch a break. They finally snared their nemesis, Splosion Man, with a diabolically clever booby-trapped cake… only to spill some celebratory champagne during the after party, thus spawning the bow-wearing Ms. Splosion Man as a result. Her mission (should you decide to accept it): splode every poo-butt motherfu**er that gets in your way.

For the uninitiated, Ms. Splosion Man is a trial-and-error platformer where you splode yourself to make it through each level’s numerous traps and obstacles. It’s not difficult in the same sense as a game like Super Meat Boy, but you’ll need quick reflexes and excellent timing to successfully traverse each of the game’s levels.

You’re also going to need patience, and lots of it. That’s because that trial-and-error approach I just mentioned is heavy on the error portion. The game delights in unveiling what I referred to as “one-time kills.” By which I mean there a lot of things that will absolutely kill you the first time you encounter them, which makes moving through levels largely a war of attrition on your initial visit.

Let’s say you need to nail a dozen timed explosions in a row to reach the next checkpoint, but along the way you’ll come across what are almost unavoidable deaths at the third, seventh and 10th detonation points. However, each time you reach one of these points and die you figure out what you need to do at that moment the next time to advance further. It does feel cheap at times, but it also makes reaching a particularly tough checkpoint feel like a legitimate accomplishment.

My only real notable gripe with the gameplay is that many sections are laid out to move extremely fast, sending you flying through levels with essentially no control over your character. At these times any semblance of being a platformer goes out the window and what’s left is essentially an intricate series of quick time events.

Sure, it’s a cool showcase for the graphical improvements in Ms. Splosion Man, but if I may borrow one of Twisted Pixel’s favourite things and quote a 1990s movie, “. . . [its designers] were so preoccupied with whether or not they could, they didn’t stop to think if they should.”

However, while those sections failed to connect with me, the overall level design is fantastic. I lost count how many times I wiped the palms of my sweaty hands on my pants during my time with the game, not to mention all those moments where I found myself subconsciously curling my toes. It’s a highly intense ride from start to finish, and since repetition and memorization are the only ways to master levels, there’s a lot of replay incentive for those that like to jockey for position atop the game’s comprehensive leaderboards.

All told, the game offers up 50 single-player levels, including several optional challenges and a handful of hidden levels that can only be accessed by finding secret (alternate) exits in primary locations. There’s also a full 50-level multiplayer campaign, which is supported locally and via Xbox Live for up to four players. It’s entirely independent of the solo world and offers up a lot of unique and challenging twists on the game mechanics found in single player. For those that truly want to test themselves, a mode can be unlocked where one player can attempt to tackle co-op mode. It’s brutal.

A challenging title with lots of content and ample replay incentive, Ms. Splosion Man builds on the first one to create a bigger, better and more badass version of everyone’s favourite combustible hero. That all this is priced at 800 MS Points should make more than a few developers take a long, hard look in the mirror.

By Herija Green
This entry was posted on Tuesday, July 12th, 2011 at 11:13 am and is filed under Herija Green, Video Game Reviews. You can follow any responses to this entry through the RSS 2.0 feed. You can leave a response, or trackback from your own site.