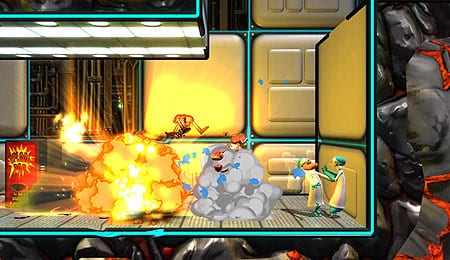 It has been a great couple of months for Xbox Live Arcade, featuring excellent titles like Shadow Complex and Battlefield 1943. Well, you can add Splosion Man to that list. A challenging platform title that entertains from beginning to end, Splosion Man serves as a coming out party for developer Twisted Pixel and is a game that should be added to your collection immediately.

Modern gaming rarely gets more simplistic than Splosion Man as all four face buttons (A, X, B and Y) will cause your character to explode (or ‘splode as the button mapping says). Beyond that, you move with the left stick and can manipulate the camera a little bit with the right. The RT works as a self destruct, and the LT is used to start a countdown in multiplayer so you can time your explosions.

During the game you can explode as many as three times in a row, which essentially works as a triple jump. After that, you’re temporarily out of juice unless you detonate another object or reignite yourself on a flame. This process can best be described as easy to learn, but difficult to master. It fits the game and makes it accessible to anyone. Splosion Man’s rudimentary controls prove you don’t need complex game mechanics to create a memorable experience.

While the graphics in Splosion Man aren’t going to wow you with their technical excellence, they do contain an undeniable charm, particularly in regards to the title character himself. The result of a scientific experiment gone awry, Splosion Man has been left manic, jabbering and able to self combust at will. He’s in nearly constant motion, even if you’re not, doing things like jumping jacks or punching the air when standing still. His antics create a playful vibe for a game that’s extremely challenging at times, helping keep this fun even when you’re dying for the 20th time in a row.

The scientists are also amusing, taunting you from a distance but cowering in fear when you get close to them. There’s even a fat, doughnut-munching scientist that you can use to block laser fire. When you do detonate them, the scientists are reduced to piles of pre-packaged lunch meat…yes, lunch meat. It’s a running joke throughout Splosion Man and it’s an effect I never tired of. You’ll also have to contend with robots, traps and enormous bosses. All of which have their own charms. The only place where the game really looks amateurish graphically is in the backgrounds, which are basically gray rocks with a different coloured fluid running through them.

Although there isn’t a lot of variety with the game’s soundtrack, it does a good job of matching the mood of the action, as do the sound effects. There’s also a wonderfully catchy doughnut song that plays when you pick up the plus-sized scientist mentioned above — I challenge you to hear that song a few times and not start humming it every time from that point forward. It can’t be done. The title character’s continuous babbling is well done and surprisingly endearing. Also, there are some great one-liners.

Splosion Man is a puzzle platformer where your goal is to escape the clutches of the evil scientists that did this to you. Unfortunately, those eggheads aren’t going to make that easy. They’ll attempt to stop you at every turn, deploying an increasingly challenging combination of traps and robots as you make your way through the game’s 50 levels. What’s amazing is that Splosion Man continually ups the ante throughout the experience, creating some truly memorable and maddeningly difficult puzzles for you to overcome. At the end of each level you’ll be scored based on how quickly you completed it, the number of scientists you turned into lunch meat and other factors.

While mental dexterity will certainly come into play when figuring out how to advance, many parts of the game are going to come down to your ability to successfully execute a complex series of jumps — often while being pursued by a deadly trap. It’s certainly a recipe for frustration, but Splosion Man does such a good job of keeping the mood light and the puzzles varied that you always feel like success is right around the corner…even if it isn’t. Of course, if you can’t clear a level by legitimate means the game will eventually offer you “The Way of the Coward,” which allows you to skip it. However, expect to be punished with a terrible score and forced to wear a pink tutu until you clear the next level.

As mentioned, the single-player mode consists of 50 levels, three of which are boss fights. In addition, you’re also treated to 50 completely new levels of multiplayer, which is playable both on- and offline. Here the focus is on teamwork where you and your partner will have to time explosions so that you’re both launched higher than you could normally go or to trigger switches simultaneously. It’s a total blast (see what I did there?), though the online multiplayer seemed a bit laggy, which is tough for a game that requires precise timing to succeed.

As if 100 levels of ‘sploding action weren’t enough, Splosion Man also loves cake, and within 94 of those levels (the six boss fight levels are excluded) there is a delicious cake to be found. Sometimes the cake is easy to find and acquire, while other times it’s hidden off the beaten path and takes perfect execution to obtain. It’s another addictive way to test your skills and prolong the game’s lifespan. Also in that vein, any level can be replayed to improve your speed with your best time being posted online against the rest of the Splosion Man community. Once you finish the game, you’ll unlock hardcore mode, which ups the challenge by removing all checkpoints and having any hit mean instant death.

From the opening cinematic to the hilarious ending credits, Splosion Man is absolutely loaded with fun, challenge and a great sense of humour. There’s a ton of content to be had for 800 MS points ($10), and the replayability is off the charts. Between this and Shadow Complex, this year’s “Summer of Arcade” has raised the bar on what we should expect from downloadable releases.