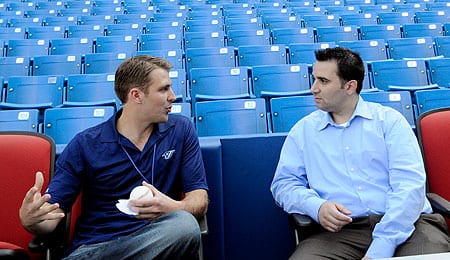 A week and change ago, the second winner of the Wind Best Conversation Ever contest had his dream conversation when baseball blogger Robbie McFarland, 24, met with Toronto Blue Jays GM Alex Anthopolous.

McFarland cites Anthopolous as his inspiration to pursue a career in baseball. Last summer, the recent university grad began working for the Vancouver Canadians, the Low-A affiliate of the Blue Jays, in ticket sales. McFarland is hoping to work his way up to the bigs, just like Anthopolous did.

WIND flew McFarland to Toronto to talk face to face with Anthopolous and to attend a Blue Jays’ game.

The Jays’ GM has picked the Montreal Children’s Hospital Foundation to receive the $100,000 donation from WIND, which goes to the charity of choice for each of the celebrities that agrees to talk to the winners.

“This is an opportunity that I could not pass up, not only do I get to donate $100,000 to the Montreal Children’s Hospital Foundation which has done wonderful things for my family,  but I get to meet someone who shares a similar passion for the great game of baseball,” said Anthopoulos. “This is a very exciting day for both of us.”

As with all the winners, I was given a chance to ask McFarland a few questions and seeing as he’s an actual baseball fan and writer, I grilled him with some more in-depth queries than I normally would have.

Here is our exchange:

RR: What surprised you most about Alex?

RR: Is there a question you would have liked to ask him but didn’t?

RM: Yes. I wanted to know who the most talented prospect he’s ever seen. Was it Josh Hamilton? Mark Prior? Stephen Strasburg? Joe Mauer? Or someone else? I could have talked to him about baseball for hours but due to time constraints I didn’t get to ask him everything I wanted to.

RR: What was the highlight of your conversation with him?

RM: I think just hearing him describe his love for the game when I asked him “why baseball?” He says he has an obsession with analyzing and evaluating players and that he’s had the bug from a very young age. He went on to tell me that lately he’s been getting into basketball and has begun obsessing over the fundamentals of players’ jump shots. Could Alex one day be the GM of the Toronto Raptors?

RR: If you had Alex’s job, what three moves would you make to steer the Jays into contention?

RM: This is a tough question because I honestly feel like the Jays have the right guy in Alex as their GM. If I had to make three moves, I would start by moving 3B/DH Edwin Encarnacion to a contender. This would open up a lineup spot for someone who is in the long term plans of the ball club, which Encarnacion is not.

Secondly, I would call up youngster Brett Lawrie once he fully recovers from his hand injury. The kid from Langley, B.C., has been hitting .354/.415/.677 in Triple-A this season to go along with 15 homers and 11 stolen bases. While those stats may be slightly inflated due to the ballpark and league he plays in, Lawrie has proven at every level that he can handle the bat and deserves a chance at the big league level.

Finally, I would take a long time considering what to do with Aaron Hill. Unless he has a huge second half in 2011, I think it would be smart to let him walk following the season. In doing so, Hill will likely qualify as a type B free agent, giving the Jays an automatic sandwich pick in next year’s draft. This move opens up some money and gives the Jays a high draft pick which combined is probably a greater package than what they could net in return if they were to trade Hill. The move also opens up the 2B spot which gives the club some options for 2012. They could bring up current Double-A prospect SS Adeiny Hechavarria and move Yunel Escobar to second. If Hechavarria isn’t ready, in the offseason they could go after a free agent to play second.

RR: Who will meet in the World Series this season?

RM: Boston and Philadelphia. Both teams are the best on paper and will likely prevail in their respective leagues come October. It would be a dream match up to watch and I hope the Phillies get it for Doc Halladay.

By RotoRob
This entry was posted on Monday, July 11th, 2011 at 11:11 am and is filed under BASEBALL, Contests, RotoRob. You can follow any responses to this entry through the RSS 2.0 feed. You can leave a response, or trackback from your own site.