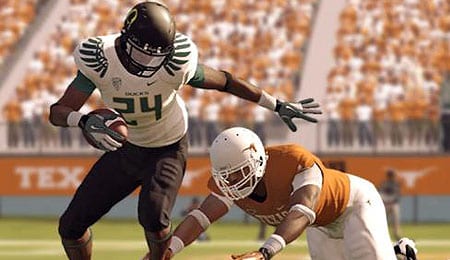 Sadly, the option to sell game-worn jerseys is not available in NCAA 12.

Every so often a sports series makes “the leap,” when lots of high-profile upgrades arrive simultaneously and result in a markedly improved product. For EA Sports’ NCAA series, that happened just last year with the excellent NCAA 11. Following up on that can be tricky business, but while NCAA Football 12 doesn’t move the needle forward as dramatically, it still offers a number of meaningful advances across the board.

After making significant strides in this department last year, NCAA Football 12 largely plays a pat hand this time around. However, improvements to the way the game handles tackling could certainly be classified as a control upgrade. That’s because players no longer gravitate toward one another to initiate tackling animations, which allows for more realistic and subtle movements in the running game as opposed to taking exaggerated routes to avoid the defender’s magnetic pull.

Another area that received major attention in NCAA 11 was the graphics, and the upgraded visuals have returned with additional polish this year. Player models move more naturally than ever following the addition of collision-based tackling — it provides so many outstanding looking moments that you’ll undoubtedly be checking out a lot of replays early on just to verify you saw what you thought you saw. It’s a feature that really ups the immersion level a couple of notches.

Upgraded HDR lighting adds a lot to the stadiums and environments, giving them more personality than in years past. ESPN’s presentation has once again been integrated into the game with nice looking montages and statistical overlays. On top of that, authentic team-specific entrances and 3D grass have been added, which looks really sharp in replay segments and still photos. These aren’t massive changes, but they help to create a great looking game.

Once again the audio maintains the status quo. Brad Nessler and Kirk Herbstreit handle commentary, and Erin Andrews does the sideline reporting. It’s unfortunate excellent titles like this and Sony’s MLB: The Show keep recycling commentary instead of pushing it forward. Given how many areas have been tweaked and refined, that this aspect gets overlooked year after year is a mystery. On the plus side, stadium and on-field sound effects deliver the goods.

Like other aspects of NCAA Football 12, the gameplay has been quietly improved despite the lack of a signature addition. I’ve already touched on the reworked tackling mechanics, which have a positive trickledown effect throughout the game — that includes more realistic A.I. blocking. Other “under the hood” enhancements include much better defensive awareness from the A.I. in zone coverage and savvier play calling from the CPU, which is suddenly willing (and able) to unleash a punishing ground attack on the higher difficulty settings.

None of these upgrades are bulletproof as you’ll still see things like safeties inexplicably dropping coverage to allow long completions or A.I. quarterbacks passing up the opportunity to scramble for positive yardage to stay in the pocket and take a sack. However, the strong groundwork that was laid in NCAA 11 is supplemented with a lot of small yet meaningful augmentations that make this the most realistic playing next-gen version of the college game to date.

As in past years, NCAA Football 12 is built around two single-player modes: the team-oriented Dynasty Mode and player-driven Road to Glory (RTG). Of the two, RTG was in greater need of an overhaul after becoming stagnant during the past few releases. Not coincidentally, it’s the mode that received the most attention from EA Tiburon, which has beefed up the game’s career mode considerably.

For starters, your career now begins at the onset of your senior season in high school. Within this mode you’re able to recreate your team’s high school colours as well as those of your rivals for some pretty cool nostalgic rivalry action. Also new is the ability to play both ways. This allows you to be recruited on offense and defense with your performance at the respective position dictating how highly you rate as a prospect. My first time through I was much better at quarterback than free safety, and thus I was offered scholarships at higher-profile schools to be a field general.

Once at college, you’ll need to climb the depth chart, which is done by earning your coach’s trust. To do this you must make smart plays on the practice field and when given the chance to play during games. As a quarterback, you’ll be rewarded for things like yardage gained, first downs converted and touchdowns scored while being docked for taking sacks and turning the ball over. It’s a bit simplistic, and it definitely favours positions routinely around the ball (the game was pretty stingy in rewarding me for playing sound coverage), but it’s a cool addition. And the more the coach trusts you, the more freedom you’re given to make pre-snap reads and change play calls.

As you build trust, you’re also piling up experience points that can be used to purchase skill packs to boost your ratings in various areas. At this juncture it sounds better in theory than it performs in practice as the packs — which are split into permanent and single-game boosts — are completely random and often have no real bearing on your position. Plus, despite some sparse availability, it’s still too easy to build up your player in a very short period of time. I definitely like the new direction that Road to Glory is headed in, but it’s still got some kinks to iron out.

The game’s primary time killer has been, and will continue to be, Dynasty Mode, which offers up only one real addition of note: the coaching carousel. Here you can create a coach from scratch or select an existing one and then designate your own prestige level. This allows you to play the mode how you want, whether that means stepping in as the head coach of Alabama or as the offensive or defensive coordinator of a low-level school like San Diego State and working your way up.

How much control you have over the game depends on what your title is. For example, as SDSU’s offensive coordinator I only controlled the team when the offense was on the field while the CPU simulated the game while the defense was out there. That’s a neat dynamic, but it’s undermined somewhat by the fact that no matter what job you hold you’re in charge of recruiting. That makes absolutely no sense. Why would I, an offensive coordinator on a two-year contract, have that level of responsibility? And since I do, what’s my incentive to recruit a single defensive player — especially since all my goals are on offense and I’m using this as a springboard to a better job?

Regardless of your role, you’re judged on a set of preseason goals, which differ wildly based on which program you’re working for. Succeed and your job security will increase. Fail and you’ll find yourself on the hot seat. A user-friendly hub allows you to easily track the rest of the coaching fraternity, and at the end of each season you’ll get to check out the various vacancies around the country. It’s a surprisingly effective system, and one that shows considerable restraint in the creation of job openings. That’s something those that value realism in their simulations should appreciate.

Recruiting hasn’t changed in terms of how you go about it, though there does seem to be more players available than ever. That helps ensure teams remain stocked with enough guys at each position. There also looks to have been some tweaks made with incoming player ratings, which now seem more realistic than in past years. Simulated stats look reasonable throughout the Dynasty Mode, which is a good thing for a numbers junkie like me as overly high/low totals have long been one of my sports gaming pet peeves.

NCAA Football 12 also features the ability to customize your own conferences and BCS tie-ins. Those are underrated additions given how the landscape of college football continues to evolve, allowing gamers to keep up with real life changes or make their own. Online multiplayer is present as usual along with online Dynasty for those that want to go toe-to-toe with others over the course of multiple seasons.

While it may not feature the obvious improvements that last year’s version did, NCAA Football 12 is unquestionably a better game than its predecessor. Gameplay has been tightened, Road to Glory has been improved dramatically and the coaching carousel features an addictive quality that has been lacking in franchise/dynasty modes. Bottom line, it’s worth the money.

By Herija Green
This entry was posted on Wednesday, July 13th, 2011 at 1:28 pm and is filed under College sports, FOOTBALL, Herija Green, Video Game Reviews. You can follow any responses to this entry through the RSS 2.0 feed. You can leave a response, or trackback from your own site.